An ever changing Brum

I came out the flat feeling I’d forgotten something. We’ve all had that feeling at some point or another. It’s a horrible feeling because you know you’ll get far enough away from where you live when you’ll remember what it is you’ve forgotten. I sat in front of 2 West Indian ladies. I could listen to the West Indian accent for days without tiring of it. Now Scouse on the other hand is like white noise. Got me wondering how the accent had evolved from the African origins, cruelly and despicably enslaved to work on plantations to where it was now, whilst the African accent had stayed the same. Getting off the bus, I remembered what I hadn’t got. Train tickets. Then the brief panic vanished as quickly as it had enveloped me. I hadn’t got them because I needed to buy them. I usually get advanced tickets, Burton is close enough that a full price ticket is cheap enough for my pocket. Why does your mind play tricks on you like that? I put it down to it still being a week away from payday and having to juggle money again. Every month is the same. I took the bus up to St Andrews to get my Bournemouth ticket. Well that was the plan. Apparently the system was going to be down till 2 o’clock. I was going to be in Burton by then. I thought about a rant but held back because when dealing with the football club ticket offices, it’s pretty much futile. They don’t listen to you anyway. They’re dismissively inept. We have a new system in place this season that is supposed to be better, ah no wait, it’s Ticketmaster. I resigned myself with knowing that we’re not even the only bundle of fans in the city that have to put up with this pathetic excuse for a service. Without us the club would be nothing but to the club we are nothing.

Back in town and all you could see was pockets of cricket fans heading for Edgbaston. I was so wrapped up with frustration over the shameless abomination of a ticket office that I’d forgotten the cricket was on. Got my train ticket and headed for the P.O.V. for a quick half. I was joined at the bar by a oldish bloke that was looking for Carling. I recommend what I had ordered. I went and stood next to the mirror. I noticed he’d sat quite near and had supped at least 2 inches so I asked him how it was. He was impressed. Another ex Carling drinker in the making? I went to leave for the train till I noticed it was raining. Now when I say it was raining, It was bouncing off the road. I waiting for it to subside before venturing out. Steve Whaley was already on the platform when I got down there. I was expecting to meet up with him later in Burton but the gardening job he’d got on hadn’t taken as long as expected. When we touched down in Burton, we noticed we were the only ones.

Burton is one of the best away days of the season for ale drinkers. Even better for us Blues because it’s so close to Brum and you get to stand on terracing. Just a shame that the Blues players don’t turn up and make it a perfect day out. We did The Weighbridge first. It had been the last on my list last season and I’d managed to do it before getting the last train back, but Steve hadn’t done it. I had a pint of the R.D.A. from the Island Brewery. The island in question was the Isle of Wight. A brewery I’d not had anything from before. Not bad. We compared lists. He had The Elms on his. I hadn’t got it on mine but it was one I was keen to do. The only other customer mentioned it was a fair walk. Reading his expression, you could see that he didn’t think we’d do it. Both me and Steve must have been thinking the same thing, the gauntlet had been thrown down. We were off to find it. 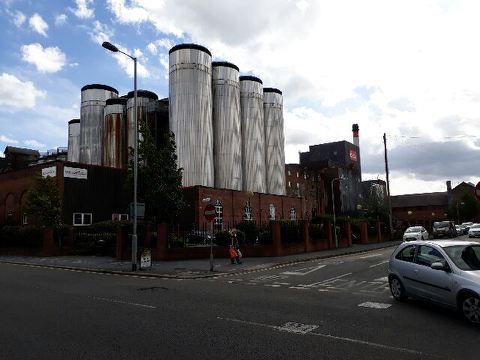 we were to find the direct source of the contents.

Admittedly the walk did take longer than expected and the selection of ale wasn’t brilliant but it was a nice walk and worth it. The pub had obviously been added to so they could do food and we both agreed it was a Sunday dinner type pub but without the dinners getting in the way. They had the cricket on so we watched Alistair Cook get his double hundred. The woman behind the bar was a traditional buxom barmaid. Gave as good as she got. Another reason for going in there. Now I can’t let this bit end without sticking in a bit of role reversal.

If this doesn’t make you smile, what does?

We found the quicker route back. It took us passed the Burton Bridge Inn. It would have been rude to miss it out so we settled on doing a half. Now I’m not sure if Michael Portillo had seen what’s in this next photo on his travels because I know he covered Burton’s beer history on his Great British Railways.

Even the formulated pubco chains have their uuniqueness and I will never get tired of seeing things like this in pubs all over the country.

On the way to The Coopers, we bumped into Russell, Nick and a work friend of theirs. Turned out, they were stopping over. Doing the pubs they couldn’t fit in, the day after. We compared lists and where we’d done. They were off to The Dog and then The Fuggles and Nugget. The Coopers is one of my favourite pubs in the country. You want character? This place has it by the dray load and then some. You want a photo to prove it? Here it is. 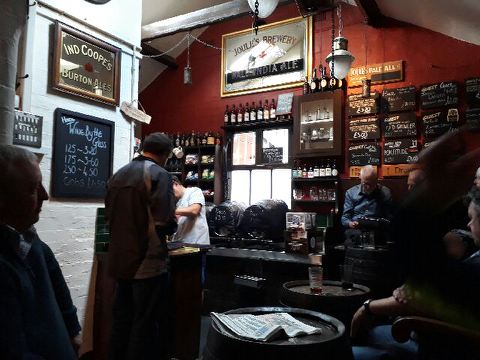 From here, It was on to The Last Heretic. This is a micro pub. At first, I didn’t like the idea of these things, I’m very much a traditionalist. It pains me to see what was obviously a pub being used for something else but they’ve grown on me. They definitely have their place and to a point, you can put your own stamp on them. Each one very different. It was in here we got talking to a lad. Explaining to him, we were Blues and what were doing. We both thought he was meeting friends for a night round Burton. Imagine our surprise when he and his friends turned out to be the East Midlands Blues supporters branch. How stupid did we feel? Well I know I did. We doubled back to The Fuggle and Nugget. This place is another micro pub but like I’ve said, they’re all different. You have a waiter like host who takes your order and brings it to you from a room full of stillages whilst you sit down. All very civilised.

A different way of doing things and definitely somewhere you’d take someone if you were out to impress them. It was also the place where we found the source of the contents. See picture below. 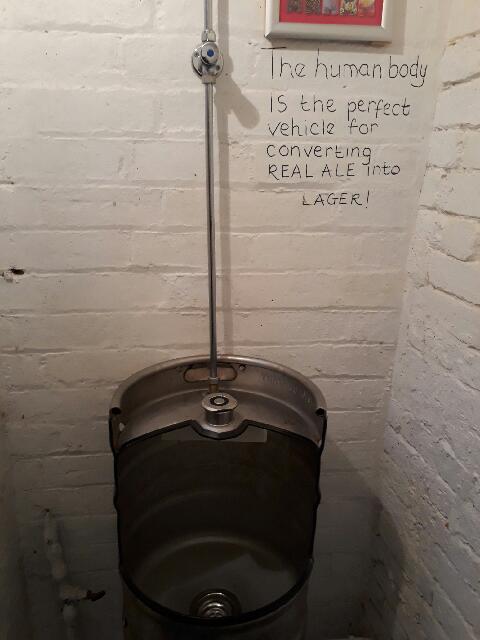 Time was knocking on and there was still 2 more places I wanted to do. On the way to The Tower Brewery Tap, we were caught up by Ian Allen who was still in his work clothes. I’m sure he said he’d been to a Union meeting. Things were starting to get fuzzy round the edges. The bar is along the one wall and you sort of queue up. It’s a big room where the bar is and has a piano on a stage that anyone who so wishes can play. Last season a proper pianist got up and played some beautiful classical music. This year a penis from Blues Carling brigade got up and tapped out with one finger on one key, the usual terrace ditties for his mates to join in with. We moved on to the Burton Town Brewery Tap. Just as we got in there, most were leaving for the match. Getting to the match for kickoff has always been pretty much optional so we weren’t going to rush. Much to the amusement of the staff.

I’m not going to spend too much time talking about the game. Besides, I’m not a sports journalist. First half, we scored and looked quite comfortable. Second half, a completely different team turned up for Blues. They looked exactly the same but definitely weren’t. We just didn’t play. Well they didn’t play. I’m not taking responsibility for their poor performance. They got more than enough good support from us. Anyway, 2 Burton goals meant we lost. I caught up with a very disgruntled Si Noonan on the way out. His finger was pointing well and truly at Redknapp. Accusing him of pulling the wall over our eyes concerning transfers. Maybe, maybe not, we’ll just after see. 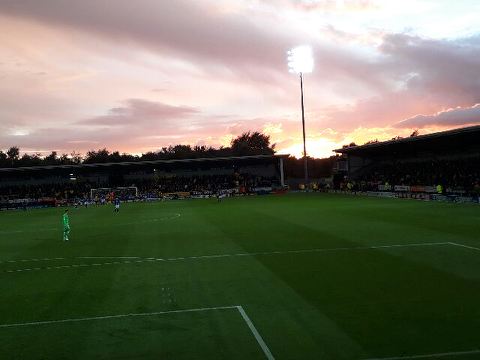 Least the sunset was special

On the way to The Alfred Ale House I had chance to say hello to Clacker and his lads. Spoons and Jude were in the Alfred. First time this season I’d seen Spoons other half. Although they have their “moments”, they’re great together. I took some leaflets advertising the Birmingham beer festival off them to leave in Stroud as well as Gillingham, when I go down there in a couple of weeks time. I said my good byes, and headed for the train. 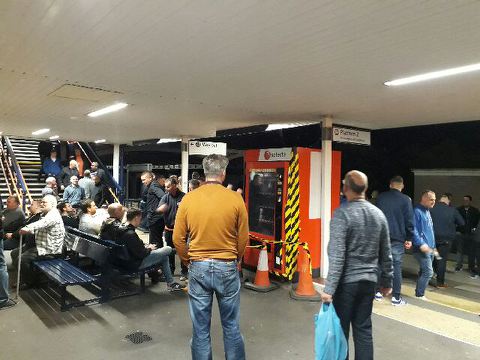 Tired and weary but we’ll still journey on

The train and bus back was a little hazy. Another good day except the result or more the 2nd half no show.