My day started with a text off Jinksy apologising for the drunk text the previous night. Along with telling me of meeting a Rangers season ticket holder from Dublin. Talk about living with the enemy. I thought living where I do was bad enough. He gazumps me. Jinksy also mentioned locking Nat Peters out of the room. I got into town and bumped into Badger in Ladbrokes. We walked down to the station ticket office together. We spotted Spoons on the concourse. I got my ticket and joined him, Steve Whaley, Darrell, Ian Allen, Mikey and J.K. we made our way down for the train. I sat behind Steve and Mikey. The rest found seats at the other end of the carriage. A lot on the train were heading where we were. Badger got on and asked if anyone had got any Carling. On the other side of the aisle was a late teens, early twenties Brummy Leeds fan. I was glad to get off at Derby as he was one of those that doesn’t see passed his own club. Spent way too much time singing Leeds songs just loud enough to try and get a reaction. The lad needs to grow up. we got off and made our way to the Babbington Arms. I spotted a Ladbrokes on the way. I was able to finish my bets. Badger checked the Rapido results. I joined up with the rest in what is arguably the best Wetherspoons in the country. There’s going to be one on New Street station. I’m hoping that at last, we’ll have a decent one in Brum but I’m not holding my breath. Mikey had ordered a plate of black pudding. Nothing else, just black pudding. Strange but kind of impressive. Darrell dripped tomato sauce all over the carpet from his sausage bap. The bloke needed a plastic, catch all, bib. I’d got myself a pint of the metalhead stout. Without even looking, I knew Spoons would be on it. He was. I’d got loose plans for the day but was open to what the rest fancied doing. The Dog and Moon was mentioned as a 10 o’clock opening. I did like the idea of the Peacock so I decided to split up from the rest. The Dog and Moon wasn’t open so I made my way to the Peacock. I got there just before opening so I hung around till opening. This is the only Marston’s pub in their portfolio that I actually like. Except for Pedigree, none of the rest of the beers are from the Marston’s range.

If you’re a true football supporter, then this is a must visit pub. A museum to Derby County.

Amongst the pictures that takes your eye was one of the most iconic images of British football. One of the players in the image went on to manage Blues. He was a great player but an awful boss. A bit like Zola. 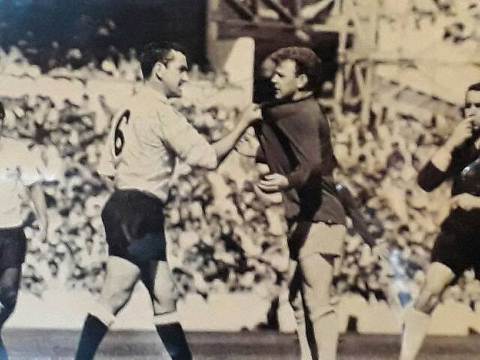 The late great Dave MacKay and Billy Bremner. You wouldn’t know it from this but these two were big mates.

There was one more thing that caught my eye in the pub.

Notice the branding? Wouldn’t happen today. Imagine the controversy? The club would be sued. Without sounding depressingly boring, the game has become far too commercial. I hadn’t eaten yet so made the wise choice of half a Huntsman pork pie from off the blackboard menu, though in hindsight, I should’ve had a whole one. Chicken, pork and stuffing to be exact. It was gorgeous. I moved on to the Furnace. A back street boozer that’s well worth seeking out. I spent a good 5 minutes boring the poor barmaid to tears with beer talk. I left the Birmingham Mail in there, just in case they ran out of toilet paper, and headed back into town. I ducked into the Silk Mill Ale & Cider House. I am at some point, going to have a cider away trip. Proper cider is growing in popularity and because of that, more places are doing it. I am expecting that particular day to end up messy though. Rob, a lad I remembered from both the Black Horse and the Roost was in there. We were in agreement that the Blues owners have no idea whatsoever with running the club and that we’re going down. Nice to know that I’m not the only one thinking along the same lines but it did get me wondering whether it would be better just to stay in the pub instead of going to the game. It was on to the Dog and Moon, Badger and his Derby mates were in there. He was choosing his beer, I told him they hadn’t got any Carling. Badger was in bits, his mates aghast. He had to explain to them, it was a private joke. Badger makes up his own lyrics to songs. He’s had whole railway carriages rocking with laughter before now and if I ever win the lottery, I’m going to get him in the recording studio because he is really funny. They got him singing one. I left him with his appreciative audience and got off to the Lord Nelson. The Dog and Moon hasn’t been open for business that long and they’re having teething troubles. A bit of hard work to go with the enthusiasm and the place will be a welcome addition to the Derby ale scene. Last season, the Lord Nelson was being renovated. The Derby Drinker had followed its progress and I was pleased to find out that not only was it now open but a good range of ales was being advertised. I wish I hadn’t bothered. It had that soulless feel about it. It was unsurprisingly empty and I couldn’t wait to get out of the place. Disappointed, I headed to a proper pub in the shape of The Alexander. I walked through the shopping mall. These things seem to suck everything you’ve got as a bloke out of you. Just by walking through it, I could feel my spirit evaporating. I dodged passed the doormen of the Alex and looked round to see who was in there. The Alexander is a head to pub. Carol and Jeff were holding court in one of the corners. I said hello, drank up and joined the throng on their way to the ground. Pride Park is easy to get to from the station but it’s a boring walk through mainly non-descript office sprawls. Everything looks the same. Identi-kit ground in an identi-kit office estate. A Harvester in keeping with the blandness. Not so much rams, as sheep. Pride Park is 20 years old now but still hasn’t and probably never will, have any character to it. Least it’s not miles away from the town centre like Reading is.

A ground as grey as the weather.

I know I should but I don’t sit in the right seat at an away game unless I’ve no option. I like to stand at the back. It’s about as close to standing on the old Kop as I get these days. The stewards were doing their job though and I was directed to roughly where I was supposed to be. A defiant, very loud, very passionate rendition of “Keep Right On” was belted out. Derby tried baiting us with “Garry Rowetts Derby Army”. We replied with Lee Clark’s Blue and White army. We were off. One things for sure. Sam Gallagher isn’t living up to the growing reputation he had before he came to us. Even Theresa May would bully him off the ball. Carsley had set us up to not lose against a side that had been set up not to lose against us. Never mind chances, there was very little skill shown either. 0:0 half time. Happy? The small crumb of not losing wasn’t much to write home about. I went downstairs to see who was about. I saw Nick. It was strange not seeing Russell with him. I said hello to Johnny Rafter and went back upstairs. I tried my luck at getting up the back, heard my name called. It was Spoons, J.K. Mikey and Darrell. There was a spare seat next to them. Now I’m not saying that the second half was boring but Mikey fell asleep twice. I just couldn’t get comfortable, otherwise, I’d have joined him. In all fairness to him, it was his first away game of the season so he was out of practice. I singled out Morrison for a fair bit of criticism in the Preston post. I’m going to add David Davis and Craig Gardner to what I said about Morrison. To me, your hidden agendas aren’t hidden anymore. Close the door on your way out lads, you’re not welcome. Birmingham City has never been a place for egos and certainly not egos that belong to players as bog standard average as you three. Jutkiewicz scored with a brilliant stooping header from a miss hit cross from Gardner. It had to be miss hit because all the rest of his distribution was awful again. 3 minutes later, we allowed Derby to equalize. Well done for keeping your concentration levels up lads. Both sides were there for the taking and both showed no ambition to win the game. Just for that, they both deserved to lose. Happy with a point? A point a game won’t keep us up. Stop the rot? The rot has already set in and has got too much of a hold. This result just papers over the cracks and not very well at that. Any green shoots that are brave enough to poke out of the pitch, will not only be trodden on but ground into the turf.

I walked back into town with Darrell. My destination was the Flower Pot, but my bladder got the better of me and I dived into the Old Bell. I indulged in a bit of people watching. Noticed a couple on their first date. They were maybe a little younger than me, not many that ain’t, I know. Definitely forty somethings. They did have chemistry and they did have a connection too but above all, they had that desperate look on their faces. I do like watching the dynamics of couples but I certainly don’t miss it. On to the Flower Pot

You love music? Proper music? Not some chatting, rhyming, noxious, misogynistic, whining, ego, ear damaging, want to pour concrete onto the recording facilities, noise? The Flower Pot is the place and it’s ridiculously comfy. I could have quite easily surfaced out of here the next day, blinking in the sunlight. Unfortunately, I had a train to catch and I still wanted to do the Brunswick. No trip to Derby is complete without a trip to the Brunswick.

The weekly branch meeting of the what happened this week club.

Good Beer, good conversation and in a relaxing environment. Sometimes, that’s all you need on a Saturday night to unwind with valued friends. Beats sitting at home watching whatever this month’s talent show is. Britain’s got baked off X factor Strictly Dancers. Bumped into Andy and Moz on the station as I tucked in to chips that weren’t as good as I’d hoped. Another away game done.