Everyone on the bus into town was either asleep or talking about it. New Street station had bodies strewn across benches. Another away day starting. My mood had taken a bit of a hit. My bank account was looking sick already. Familiar scenery helped me put it to the back of my mind. I spend so much time traveling these days that the country seems to be getting smaller. I touched down in Doncaster and worked out what platform I needed to be on. This is where it got a bit strange. First of all, the platform required was 0. That was a first. Got me thinking of Platform 12 and 3/4 with Harry Potter. Maybe it’s just a Yorkshire thing. Leeds station is confusing. The platform is about a mile from the rest of the station. Even that seems weird. A cheaply built corridor that seems never ending. When the train came, the joke was complete. Northern Rail are still using rolling stock 25 years after it should’ve been decommissioned. These things were a bus body welded on to a rail bogey. I know they are rigorously tested and all that but I still don’t feel entirely safe.

Darrell had text me to tell me they’d done the bar on Donny station. I’d got plans to do it on the way back through. We stopped at Goole. I can’t go through Goole without remembering the old Jasper Carrot joke. If Brummies are from Brum, what do you call people from Goole? 9 year old schoolboy humour but still makes you smile. The journey took me passed Goole Town and also North Ferriby United football grounds. There’s a good chance that I’ll visit both in the future. Steve Whaley met me off the train and we headed to The Admiral of the Humber Wetherspoons. This place is in the G.B.G. Neither me or Steve could work out why. More your standard Wetherspoons than anything special. Spoons, Darrell, J.K. and Mikey landed. Me and Steve had bought food. The others hit and run. We spent most of day out of sync with them. On the way to catching up with them, we spotted Carol, Jeff and John. Steve Cotterill had been appointed our new boss, the previous day. I tried to be positive about it when Jeff asked my opinion. He agreed with me. A bit of a “We’ll see”. There’s a few things coming out about Harry’s reign now. I know you always get fallout after the event but the more you get to hear, the more you wonder what the Hell is going on. I’m sure I’ve stated before that us Blues fans are pessimistic by nature, Wednesday was a nice feeling but it’s not one I’m expecting to get used to. We left the 3 amigo’s and went in search of the other Wetherspoons.

City of culture? Well it’s definitely got some impressive buildings

The Three John Scotts crept up behind us whilst we were trying to find it. This Wetherspoons was definitely worth it’s G.B.G. entry. Mikey should’ve been wearing a blond wig as he’d seemed to have left his brain at home along with his belt. He’d had to buy one in Hull to keep his jeans up. He’d also forgotten what the symbols on the doors meant and had walked into the ladies by mistake. The others had breakfast. Mikey had more than just a plate of black pudding this week. Spoons was as disappointed as I was. We moved on to the Olde White Harte. This is reputedly the place where the decision was taken to stop Charles 1st from entering the city at the start of the English Civil war. Stood in the middle of the pub, you could sense their presence. Carol and Jeff’s presence was in the corner.

Spoons told us about the T-shirts Churchend were doing to commemorate Goats Milk winning the champion beer. There was no way I was missing out on one of them. There’s one coming my way. Lion and Key was next. What a place this was. There was a fair number of Blues fans already in here. One had an impressive unofficially printed T-shirt with the Blues emblem and the Adidas Originals emblem. Fall marks for ingenuity. 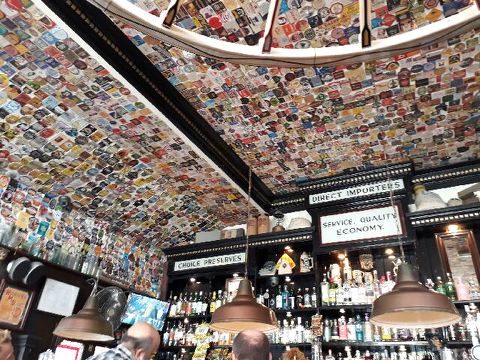 So much to look at.

Do NOT show this to your boss. Unless you’re a masochist. Think about your fellow work mates, they won’t thank you.

W.M. Hawkes was next. I sent the pic of Badgers Arse to Russell. With Badger being the nickname of one of our mates, it just made it funnier. Spoons announced he was off to make some more Goats Milk, and went to the toilet. He, J.K. and Darrell went off to Oscars. Me, Steve and Mikey stayed to finish our drinks.

For fox sake. Taxidermy in a pub?

I’ve never laughed as much in a toilet as I did in this place. I had to take care, I didn’t get wet feet. 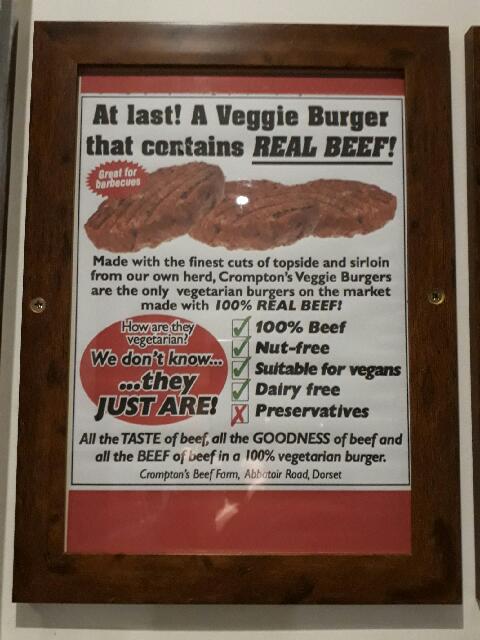 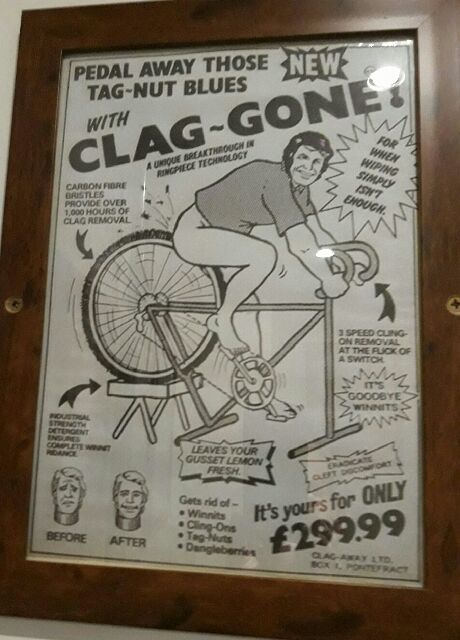 There were loads more, go see for yourself.

Just as we got to Oscars, the other three were finishing up. Along with the Lion and Key and W.M. Hawkes, this was the third pub owned by the same people. It was also the most boring out of the three. I say boring, we’d just been spoiled by the previous two places. Just as we got to the George Hotel, the other three were coming out. I got the chance to take the photo below though. 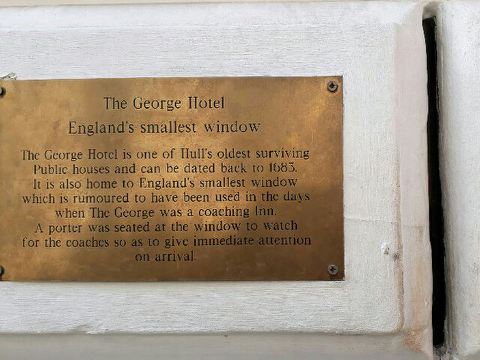 Yes, that slit to the right has glass in it and yes, someone has actually tried smashing it.

The last stop before the game was Furley and Co. Unusual name for bar, was half expecting to charged a consultation fee. I was feeling peckish so ordered a scotch egg. To my utter disgust and disappointment, it was runny. Darrell was impressed, I wasn’t. If this is Hulls contribution to gastronomic culture, then they can keep it. Whilst everyone else was wondering what to do to get to the ground, Spoons decided to walk. I joined him. We knew we were going in the right direction because not only were people wearing yellowy orange going the same way but so were Carol and Jeff. We got in the ground for kick off. 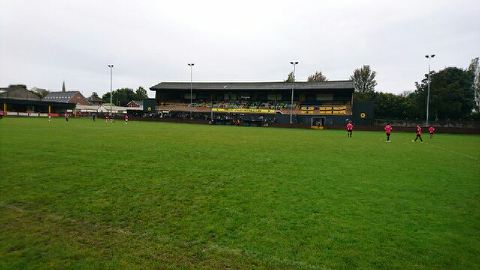 Prescott Cables. I should’ve met up with my Nephew Dave and gone here instead.

There’s many times when you’re watching Blues that you’d wished you’d stayed in the pub. Down the years, I’ve watched some absolute garbage. Of the 759 games I’ve watched involving Blues, this was the worst. I was there for Kidderminster, Swindon 6:4, Villa 5:1 away, Rotherham away 5:1, back to back home 6:0s v Palace, 7:0 v Liverpool in the cup and of course, the 8:0 v Bournemouth. These I’ve mentioned don’t come anywhere near to how I felt when I left after the 4th on Saturday. Those games, we either got torn apart by better sides or were just inept. Had we played the Hull side of 2 years ago, we would’ve had 10 put passed us. I came out of the ground angry. These players are good enough, they just didn’t care on Saturday, didn’t want to know. This after knowing that Carsley will be staying on as number two to Cotterill. There’s something that stinks rotten with these players. Worse than the bins that haven’t been emptied in Brum. We sang our hearts out. It wasn’t for them, it was for us. These players have consigned themselves forever to be viewed with disdain. You don’t care about the club or us? Don’t worry, the feeling is mutual. We also have long memories. I blinked and it was 2:0, sneezed, it was 3. There was nothing, no back bone, no passion, no response. I’ve been in hungover Sunday league pub teams that showed more spirit than this. It kicked off to the left of me between a mob or Blues and stewards, it kicked off to the right of me with Blues and Hull. With the gremlins in Blues shirts doing their best to destroy any kind of chance any new manager have of keeping us up, I left. There was no way I was going to be kept in after the game. I was off to where I should’ve stayed. I wasn’t the only one who heard the 5th go in as we trudged away. Steph text me as I made my way to the Whalebone, she wanted to find out how it could’ve finished up 6:1. The only thing that had surprised me is that we scored. I vowed to do every single game this season, I’m hugely regretting it.

I had the fudge brownie stout. I didn’t check the a.b.v., it was the sound of it that attracted me. This one’s a proper Xmas beer. You wouldn’t need many either. I did think about having another but I wouldn’t have made the train, I took a slow mooch back to the station.

This place would’ve been a hive of activity back in its heyday. State of the art technology now a museum exhibit in waiting. More ghosts but of a different era.

A pacer here, a pacer back. Driver only operation? A disaster on its way. This is the type of thing the rail unions are fighting to prevent going wrong.

I got back to Doncaster to find out they’d cancelled the last train back to Brum. Had I not had enough today? Obviously not. I asked staff of a different franchise who advised me to get to Sheffield and ask there. As if by magic, a train for Sheffield pulled in on next platform. I ran back down the steps I’d just come up and up the other side. I got to Sheffield to find that at least I could still get a train back to Brum. The plus point to all this, at least I was able to get a drink in the wonderful Sheffield Tap. Once on the train I bunkered down and went asleep. I dreamt of a team of players that care.