This was my second double game weekend of the season. I’d text my Nephew Dave the previous day with when to meet up when I touched down in London. I hadn’t heard back so I text him again. He hadn’t received my text so I resent the original text. He was up for it. Got me wondering where these missing texts go. They all in a big warehouse somewhere? Is there a mischievous bunch of sprites making texts disappear? Is it really just rubbish network service or something more sinister? Whatever it is, it’s not only strange but also very annoying. After changing buses in town, I hit the club shop to get my Sheffield United ticket. Ticket purchase was surprisingly painless for once. Back on the bus into town. I sat upstairs and had to endure yet another person who either thinks that everyone likes the same brain melting music he does or they’re super cool and if you don’t like the noise pollution they’re subjecting you to then you’re too old. News for you, we are currently going through the worst era in modern popular music. The lack of talent and imagination in today’s music is depressing. Before you go shouting “It’s your age” at me, think about what I’m saying here. I’ve been listening to music all my life. Not only whatever was current but music from before I was born. Most people have a particular decade that they identify with. Usually coincides with their formative years. I haven’t got a favourite decade (Possibly because I’m still growing up) but what I do know is that the current decade is mind numbingly irritating. There is the odd track that doesn’t make you want to rock back and forth in the fetal position whilst staring into space but those tunes are few and far between.

There was no one in the Woodman when I got in there but not for long. Jinksy, Pete and Russell landed, quickly followed by Steve and then as we migrated outside, Darrell landed. Russell had found a website run by people who obviously have way too much time on their hands and “Gifted” with warped minds. He proceeded to show us some of the cobbled together images and captions. You know you shouldn’t look, let alone laugh but you just can’t help yourself doing both. It really is moral fibre stretching stuff and my sides ache afterwards. It was on to Dig Brew. I’d been looking forward to going in here as soon as I knew it was opening. I wasn’t disappointed. If I’ve got a criticism and it really is being picky, the toilets weren’t very good. Not that I expecting some kind of Victorian engineered masterpiece but only two cubicles seems inadequate. If the smell and the prices on the menu are anything to go by, the food should be good. The beer was good. I had the black I.P.A. Something I’m quite partial to. It was good if a bit on the strong side. Pete had a lager. No not Carling. This was their own stuff don’t forget. Had a bit of life in it. He was that impressed that he stayed for another one. We moved on to the other new place that had recently opened. The Ruin. I had only spotted 2  pulls on when I looked through the window (No, I wasn’t licking it) when discovering the place before the Wednesday Wednesday game (No, not a typo) Turned out, there was four. Three were being used, One was Doombar, one was a Two Towers and the other one was unknown, presumed Two Towers. It was the one everyone had. It was ok. Certainly wasn’t the worst. Scholey came in with his son. Scholey is Johnny Schofields son. The great man’s Grandson has inherited his height. Seems to get taller every time I see him. As I was talking to the others, I did a double take with someone that Scholey was talking to. The hair might have turned a whiter shade of grey but the rest of him hadn’t changed. It was Brynn, a lad I hadn’t seen for well over a decade if not two. We hugged and caught up, I gave him Walshey’s number and forgot to give him my own. I’m sure I’ll bump into him again. J.k. had landed by then for a quick half and it was off to the Clink. L.J. rang me up to find out where I was. He joined me and Russell in the extended bit. We were talking and more to the point, running the Anchor down with Gerry, a lad who we knew but hadn’t seen lately from there. He, like us, used to be a regular in the Anchor. He, like us, won’t go in there anymore. I can’t say I don’t miss the place, but what I miss, is the old Anchor, not what it is now. The half pint that L.J. had bought himself was gorgeous but he was turning his nose up at it. We finished up at the Dog before the game, Spoons was giving out the t-shirts everyone had ordered, he kindly allowed me to owe him for mine. Good job really as selling bits of my body for cash in this country isn’t an option yet.

So to the bit I wasn’t looking forward to. Not sitting by Seeley and Steph, that’s actually more interesting than the game at times. I’d been predicting a 3:0 defeat. Morrison was captain. Maybe 4 or 5 then. I was expecting Cardiff to come at us quickly. They didn’t, we, or to state correctly, Che Adams scored. Picking the ball up, he accelerated passed a couple of Cardiff statues and cut inside before firing into the bottom corner of the Welsh clubs net. It was a good individual goal. Surely there’d be a response. There wasn’t. We looked ok, but then we did against Preston first half. Before I had chance to advise Mr Moyna at half time to leave his Blues top at home against Millwall, he told me he’d read my blog and wouldn’t be wearing it. Very sensible. Second half and I was expecting Cardiff to come at us. They didn’t. This was not the team that I saw rip Leeds apart before the International break. We went close to adding to the lead. Warnock made changes. It made no difference. It’s been said that we played well. I don’t think we did. Cardiff were woeful. Has their bubble burst? Will there be a backlash? Did this win fill me with renewed hope? Ahhh, one i can answer. No, it it didn’t. I didn’t see anything at all to be optimistic about. Yeah we won, but one swallow doesn’t make a summer. For me, it’s new manager bounce, a false dawn. Thanks to Seeley, though I’m sure he hadn’t realised because he should’ve kicked up a fuss if he had, I was in possession of some chocolate birthday cake. I’m hoping that like the Queen, he’s going to have two birthdays a year. The cake was very nice. 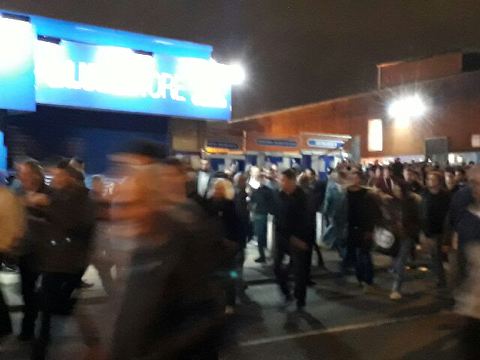 The Cardiff fans, or at least some of the more volatile ones, kicked at the gates to let themselves out. Quite an impressive show of pent up aggression. After their side’s performance against us, I could understand why. For a minute or so I thought it might have escalated into something more, same as the team again, it didn’t.

The West Midlands police synchronized walking team practicing for the upcoming Morris dancing event between us and the Villa.

With L.J. touching down late, we went for a last beer in the Wellington before he caught the train back home to Coventry. We both had a good moan about work, he’s not enjoying it anymore. I did wonder when the novelty was going to wear off. He confessed that his motivation was non-existent. He really does follow me. It pained me to hear it. Not just because I’m his Dad but because he is talented. He said how much he loved my blog but he’s a much better writer than I am. I can’t live his life for him, living my own life is hard enough and it’s not like I haven’t made mistakes (I’m sure my eldest Sister will be nodding furiously when she’s reading this.) but I do wonder where life will lead him. I just hope he doesn’t make as many mistakes as me. Anyway, on to Millwall and a chance to enjoy a drink with the always friendly locals of Lewisham before waking up in A&E.