Thanks to those lovely people at Sky, another traditional 3 o’clock Saturday kick off had gone west and it meant that either I twiddle my thumbs at home or pick another game to go to. Except for Arsenal and West Ham, all the other grounds I’ve got to do to complete the 92, I’d already planned for, so I looked at the non league fixtures. Originally, I’d penciled in Hampton and Richmond v St Albans City. I bought my advance train tickets down to London not realising that the fixture fell on the same day as the F.A.Cup 4th qualifying round. This was later pointed out to me by my northern ground hopping Nephew. (The grounds are northern he’s an adopted northerner) Hampton and Richmond were still at home but so were Haringey Borough. The more I thought about it, the more Haringey appealed to me. Once the electronic carrier pigeon who was delivering my text could be bothered to do its job, me and my Nephew were on. The morning after the night before was kicking in with a vengeance. I hadn’t had that much to drink the previous night but what I had had, was pretty strong. I could have really done with that extra hour when the clocks go back already. Whilst I would be watching the F.A.Cup, Jinksy would be watching Walsall, Darrell was ticking off his penultimate ground in Swansea and Nat Peters would be making his way to the Molyneux to watch Villa fans fight amongst themselves as their team get beat. Like I said, those lovely people at Sky.

I was expecting to be waiting for Dave, he was already in the Mad Bishop and Bear when I got there, waiting for me, well outside actually. I bought a pint of Fullers Oliver’s Island off a barmaid who made the mistake of asking me what had brought me to Paddington station, so I told her. I imagine she didn’t ask anyone else the same question the rest of the day. I joined my Nephew outside and played catch up. He’d mistakenly thought I’d bought the Daily Mail until he’d spotted the accompanying Guardian. I reassured him that I hadn’t lost my socialist values just yet. He filled me in with how as his mates Best man, he’d had to be an ambulance service for a 90 year old wedding guest who had tried diving down the church steps as opposed to just walking down them. All to get closer to someone he fancied. Do blokes never learn? No, no we don’t. We should, but we don’t. I hadn’t looked to see if there was any tube engineering works. There was and it made getting to Liverpool street a lot more difficult. We got there later than I would have liked. The Hamilton Hall was heaving with Spurs fans. I was expecting them to be drinking closer to Wembley to be honest. It made getting served a lot harder but once I did, it had to be one from the festival range. Zululand pale ale, Zululand Brewery. Well it had to be that one too, didn’t it? According to the festival notes, it was cuckoo brewed at Wychwood brewery. Regardless of that, it was nice. Dave couldn’t get his head round the contrast with the pub surroundings but then looking out onto the concourse. For a Wetherspoons, it has got more of a pub feel to it. Looking for the train details on the big V.D.U., Dave spotted a Norwich fan with Holt on the back of his shirt. Dave follows the fortunes of ex Shrewsbury players like I do with Blues. He’d heard that Grant Holt was playing non league football for someone and asked the lad if he knew. Luckily for Dave, the lad wasn’t wearing it for a bet or some strange fashion statement, and informed Dave that Grant Holt does in fact now play for Kings Lynn. We got the train down to Bruce Grove and following my written misdirections, made our way to The Beehive. This place is a superb example of brewers Tudor. It impressed Dave. He loved it. They were showing the Liverpool v Man Utd game. There’d been loads of glory hunting “We’re gonna win the league this season” Liverpool fans getting the train from New Street. At least they were at the game.

The ale range was disappointing but we were told this was because the new Spurs ground being built had taken a big part of the clientele and there just wasn’t the call for it. Will they come back? Will they have a pub to come back to? I hope so because I did like it in here. Talking of plastics, there was a Man Utd plastic in the next place. The Elbow Room. As with all plastics, he vanished on the final whistle. I’d fallen victim of Marston’s rebranding in here. To be honest, there was only two cask ales on and the other was Courage Bitter so it wouldn’t have mattered what I’d ordered. 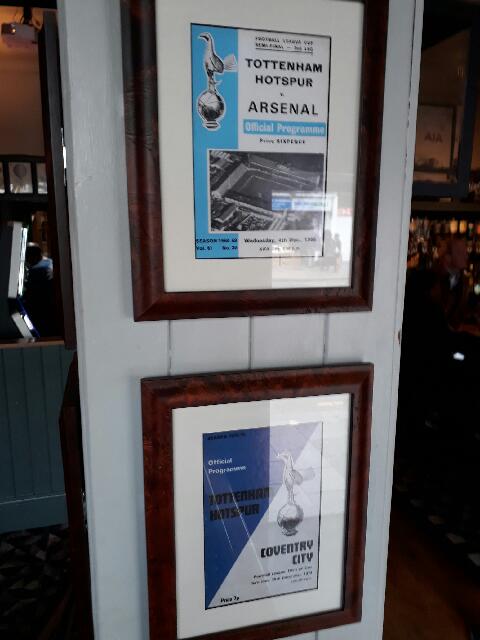 It’ll be a long time before Coventry play Spurs in the league again.

We left our calling cards in here. There’d have been a confused customer picking up a Birmingham Mail or Chorley Guardian. We got the bus up to where the new Spurs ground is being built.

These two photos don’t do the place justice, it’s HUGE!

Dave couldn’t let the opportunity to buy his Mom a present, pass by

I hope he’s got a very good hiding place for when she visits again. Honestly Sis, I had no part in it. I will admit to acknowledging that once built, it’ll knock spots off the Arsenal though. In mitigation, it’s going to have its own brewery. I hope our Chinese owners find this out. . . . . Ahhh what am I saying, they can’t even get the normal stuff right. It’s took them a year to reveal who they actually are. Don’t get me started with the manager situation.

We got the bus down White Hart Lane. Although called White Hart Lane, Spurs ground wasn’t actually on White Hart Lane. The Haringey Borough ground actually IS on White Hart Lane. Although I went to watch Telford United in their F.A.Cup heyday, I never watched them in a qualifying game. This was a first. I hadn’t watched clubs this low down in the pyramid either. I definitely didn’t moan at the £7 entry fee. The programme was £2. I’m used to paying £3. If I’m being brutal, content compared, £2 was too much but I didn’t mind. This is grass roots level. I also didn’t know a great lot about either club. About as much as the average plastic actually knows about their club, as it happens. The programme had a couple of pages dedicated to Haringey Borough’s club history, so at least I wouldn’t be so ignorant. This is Dave’s blog @davidjohnpreece1990 on his blog he goes more in-depth with both the game and the clubs histories. It’s a good read and the reason why I now follow non league football with genuine interest. 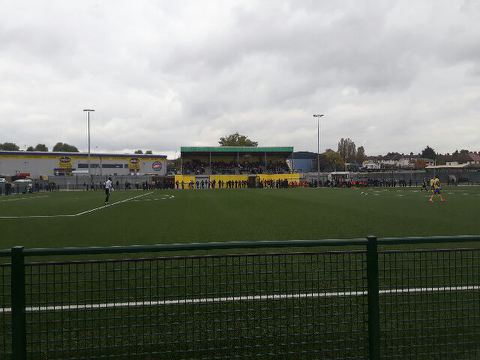 Not the biggest stand in the world but still a stand

I was completing quite a few firsts, not only the earliest F.A.Cup tie, watching the lowest placed clubs I’ve ever watched, attending a non league game with my Nephew, seeing the new Spurs ground (Albeit, being built) and the first game watched on a 3G pitch (Watching a game on TV doesn’t count.) According to Dave, the ball didn’t bounce properly. He was right. Every now now and again, the ball bounced like one of those golf ball sized fluorescent high bounce balls that your Mom banned from the house because of the damage they caused so you took it outside and lost it on about the third throw. I told him about Q.P.R.s plastic pitch. Heybridge had brought a coach load of supporters and they proceeded to make a right racket. I’m still getting used to fans singing at non league games. That was another childhood memory I shared with Dave. When watching Telford all those years ago, it wasn’t done. Another pointer to growing apathy towards the Premier league no doubt. This lot not only sang but they proudly displayed a Heybridge Swifts flag and unfortunately had a badly played drum. Did it lift the team? Well they went 1:0 up. In keeping with proper non league crowds, someone had brought their kids along. I didn’t see who the little culprit was but their chosen cuddly toy got chucked over the advertising board. Was it a protest against an offside decision? If it was, then he really needs to practice throwing at a moving target, ie:- The referees assistant. With much cajoling from Dave, said official finally chucked the missile back over. Half time came and me and Dave had a bit of a nose around. We went in the club house. I forlornly looked for a pull at the bar. Just your usual keg rubbish. There was a fair lengthed queue for the food kiosk, so we went to the one pitch side. Steak and kidney pie in hand we took up a spot on the opposite side to the first half. Dave admitted to never having a steak and kidney pie. He’d had steak pie but never steak and kidney. I almost dropped mine in shock. Second half and Haringey pressed for, and got the equalizer. Heybridge hit back, 2:1. Hit again through a definite penalty. As Haringey chased the game, Heybridge broke and scored a 4th. It was harsh on Borough. The game was a lot closer than the scoreline suggested. 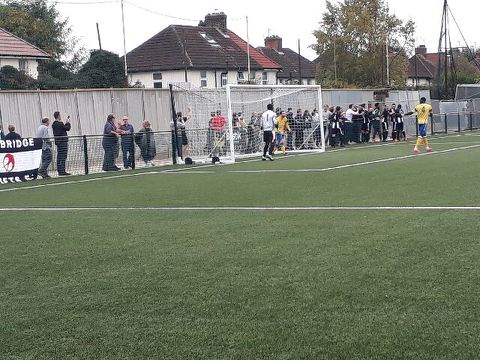 The Heybridge Ultras going ballistic after the penalty.

Haringey did manage to pull a goal back to make it a bit more respectable but way too late to be anything other than a consolation. The ref blew the final whistle on what had been a really good game.

The ground had got its own dedicated bus stop, only the bus couldn’t use it because the Ol Bill were hogging it. In fairness to them, they were booking someone for selfishly parking in the bus stop. We jumped on the W3 back to White Hart Lane station and waited for the next train. The station overlooked a group of council flats surrounding a playground. Dave remarked that you could watch your kids playing from your balcony. Fag in one hand, can of Carling in the other Shameless style, I added. I was catching the train back from Marylebone and had penciled the Globe in for a visit, so that’s where we headed. Inexplicably, other than I can be a complete Muppet at times, I’d got the train times wrong. Very wrong. Meant we could go and get another pint. With the Bree Louise shutting, I fancied landing there. As we got there, Dave started to recall a very drunken Christmas party there. He had been so drunk that his work colleagues had stuck him in the hotel opposite. I can’t say I wasn’t impressed. Both with how out of it he’d got and his work mates who sorted him out.

Resplendent in a Japanese football club shirt, back to the scene of the crime and yes, I am rather jealous of the hair.

Dave stayed on the train as I got off at Marylebone for the second time. It had been fantastic spending time with him and a great day out. I just had time for a quick half back in the Globe before getting the train back to Brum. I was woken up by a posse of Solihull Blues singing “Keep Right On” into Moor Street station.