I wasn’t really looking forward to this one. Any time off from work is always welcome, especially as I’m really growing to hate where I work, but a midweek trip to Middlesbrough? In November? What was I thinking when I decided to do every Blues game this season? I hit town. Getting through the German market wasn’t easy at the best of times but with the anti terrorism measures they’ve put up, it’s nigh on impossible. It’s probably best that we’ve got them but what’s next? Searching everyone that go anywhere near it? Police with Kalashnikovs manning watchtowers? I caught the train, stuck my headphones on and put my nose in a library book. My sister Chris who unlike me isn’t a technophobe, has a kindle. Personally, I can’t stand them. I love the look and feel of a book. I enjoy reading but I go through periods of time when I just don’t pick up a book. Other times, I chain read to the point where I hate not having at least two books lined up so I don’t run out. The one that I was making short work of was dark and gritty. Just the way I like it. An observational axe chopped slice of life. This one of a life I know of but don’t belong to. Like looking out through a window. You can see that it’s raining, you just can’t feel that it’s raining. I changed at Darlington. The birthplace of the world’s railways, albeit a freight line. Proud of its part in history, there’s a storyboard telling you about it. Had it not been so cold, I’d have been more interested but I just wanted to get on a warm train. Luckily, the heating was working on the archaic Northern Rail service that turned up. Moving through the long closed coalfields, we arrived in Middlesbrough. As I couldn’t check in until 4 o’clock at the digs I’d booked, I took in the Infant Hercules. This place is one of the first micro pubs that opened up in Boro. Three more had opened up since my last visit, I’d get to do two of them. The best thing about Middlesbrough is the people. Middlesbrough is one of the most friendliest places in the country. I got talking to the woman running it. Lynn had worked in the steel industry for 37 years. Straight from school to being made redundant. Her and hubby used some of the redundancy money to set the place up. I’ve missed out on redundancy money twice in my life because I’ve jumped first. I never have had any luck. I’d welcome redundancy from where I work. With employment agencies having a vice like grip on the jobs market, movement between jobs is extremely hard, meaning that most people are stuck in low paid jobs and employers know and exploit it. I got to where my digs for the night were. There was no sign to say it existed. Confused and not a little anxious, I rang the place up. Apparently, I needed to go and get the keys from the agency. This was a first for me. I trapsed to the agency. It became clear that I’d booked into some kind of limbo dumping ground for the DHSS homeless. I also didn’t realize that they wanted a deposit for the room. It was in the small print that I hadn’t read or hadn’t seen. The problem was, there wasn’t enough in my account. I put the charm on. It worked, I got the keys. I trapsed all the way back. Do you think I could get the keys to work? Would’ve helped had I’d have used the right one for the right door. Thankfully, a Blues supporting couple I know by sight and were stopping at the same gaff, took pity on my idiocy and helped me out. I hit the ale trail again. The first place was one of the micro pubs that had opened up since the glorious 0:0 draw I witnessed at the Riverside two years previous. The Chairman is more your bistro type place. The food did smell nice mind. Plus it had two T.V.s showing the Chelsea game, not that I was bothered. I usually take a fair few photos during an away visit but without sounding harsh, except for the people, there’s no reason to visit Middlesbrough. Talking about the people, there was a couple in the Chairman, she was drinking a pint and he was drinking a glass of wine. Not a sight you come across all the time but good to see. A break from the stereotypes. He actually looked a bit like my real ale drinking eldest Nephew. Not that he isn’t partial to a glass or five of wine. Least it wasn’t Carling. The next place on my list was the place I wanted to go in most. Slaters Pick, yet another micro pub but this place has got the pub feel absolutely nailed. 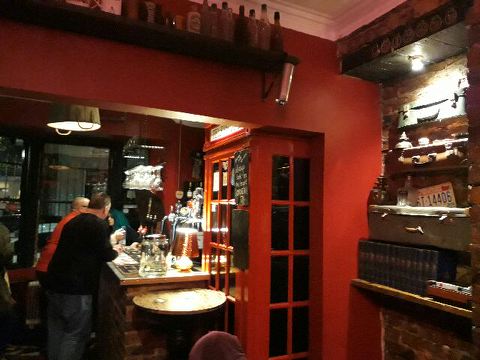 The cash register was set up inside the phone box. For anyone younger than 25, before mobile phones, we used to queue up to use these things. They were playing an Oasis album. I didn’t realize how much I liked Oasis till listening to the album. They’re no Roses though. I could’ve stayed in here all night. Two things stopped me. First of all, I wanted to take in Sherlock’s again and I’d stupidly vowed to do every single game this season and believe me, the season seems to be getting longer and longer each game. It’s said that time flies when you’re having fun. That 90 minutes is increasing by the game. Sherlock’s hasn’t changed since the last time. Still brilliant but it had just lost its number one tag to the Slaters Pick. It’s run by a couple of Boro season ticket holders. I didn’t get to talk to them this time but I’m sure the one recognised me. I don’t suppose they get too many with my accent in there. Time was ticking on so I took a deep breath and took my chances with the weather. The weather tried its best to extract that deep breath from out of me. It was horrendous. It was smashing it down with rain, and the wind? I swear I was passed on the way to the ground by a bus shelter. There were people clinging to it. It’s times like these when you know your addiction is beyond help. It was a relief to get in the ground. Mainly because I’d managed to survive being blown into the air and deposited somewhere the other side of Hartlepool.

I knew Dave, Rob and Leo were at the game and it wouldn’t be hard to find them amongst the hardcore barmpots that had made the trip. 399 barmpots to be exact. Daz phoned me. Like me, another barmpot. He was checking to see if I was one of the few. When I was a kid, my Mom told me that if I hadn’t got anything nice to say about something or someone, then don’t say anything at all. I should just leave this bit blank then. Truth is, and my brother and sisters will testify to this, I never used to listen to my Mom. (Probably why I kept doing daft things) That new found team spirit that had been so refreshingly evident on the previous Saturday, had vanished. Normal service resumed. Apathy rules again. The first was down to the greasy Pole. Don’t mention Kuszczak to Leo. He would rather have his own sister in goal than Tomasz. He’s got a point though. If nothing else, her kicking has got to be better. Couldn’t be any worse. In between Boro’s first and second, they gave us the ball, sat back and invited us to do our worst. For what seemed like half an hour, we passed the ball crab like from touch line to touch line without going forward. Nobody wanted to be the one that gave the ball away and nobody had the courage to go forward. Middlesbrough got bored, took it off us went up the other end and scored. I spoke to Daz at half time, went downstairs to see who wasn’t about and joined the other three for the second half. Cotterill made changes. Changes that didn’t make sense. Changes that didn’t work. The only team that was going to score in the second half wasn’t us. Boro almost did but didn’t. How they didn’t, I don’t know. The best opening for us fell to Maghoma. It was a good chance but he was never going to put it away. I could hear the gears and cogs inside his head grinding from where I was, such was his confusion as to what to do. so another 2:0 defeat. I might just start putting money on us to lose 2:0 every week. That’s what seems to be happening. 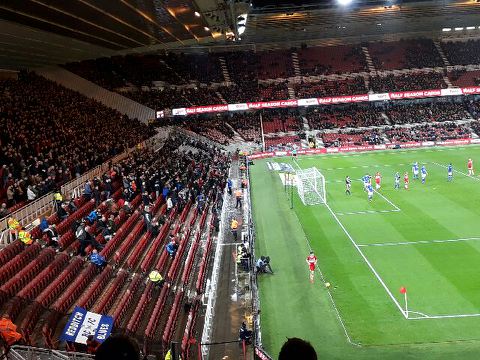 Your grounds too big for you, but then, so’s ours.

As I was leaving the ground, there was a stand off between a couple of lads. I don’t know what had been said and I wasn’t going to hang around to see the outcome. It’s a strange walk to and from the ground. It’s like it’s cut off from the rest of the town. You have to go through a couple of subways and over a level crossing. I made my way back to the Slaters Pick. The barmaid was the same one as before. Had a gothic punk thing going on. A Siouxie Sioux clone. Mesmerizing. There was a band on. Complete with a Sax player. More of a jam session than a gig. They played “Moon Shadow”. I couldn’t help but smile. It’s a tune that Badger will absent mindedly sing from time to time. To be fair to him, he’s all over it. He’s got genuine talent has our Badge. The only thing that let them down was a lad that thinks he can sing. A third rate wedding singer at best. I gave up listening to him and went back to the digs. If I hadn’t already woken up then I would’ve been woken up by the people in the next room talking quietly. You don’t get much for £25. Least it had a shower. I dropped the keys back at the agency and went in The Swatters Carr, a Wetherspoons, just as it started raining. The breakfast filled a gap. I caught up with what Worzel had to say about the previous nights game. The more I read or hear his interviews, the more he sounds like a west country version of Lee Clark. He thought the only difference was Middlesbrough and Assombalonga in particular, putting their chances away. He reckoned that we made more chances. He must’ve dreamt them up during the night because I never saw any chances except the one for Maghoma. Breakfast and pint finished, I went for a mooch round the town centre. It’s a sorry looking place. Very drab. Very run down. The drop in temperature only made it even more inhospitable and in spite of the friendliness of the inhabitants, I couldn’t live in the place. 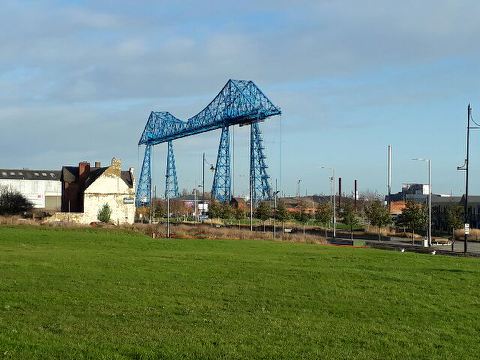 You give a kid a Meccano set and this is what happens.

Every train out of Darlington was delayed. It was that chaotic that I ended up getting the wrong train back to Brum. I got on the preceding delayed train thinking it was my delayed train. Unsurprisingly, the guard didn’t make a big thing of it and let me stay on till New Street.