I’ve usually got an itinerary when I’m going to an away game or ground hopping, so it felt a little weird making my way into town knowing I hadn’t got one. Although I hadn’t been to Bramall Lane for at least fifteen years, I know Sheffield that well that even with knowing I was doing a couple of new pubs, I knew roughly where they were and so wouldn’t get lost. Jinksy text me to ask what train I was on to Sheffield as he was on the train into town. I knew most of the lads were going to be on the one after mine so it was nice to have company. I’m glad he did because he told me about a mutual friend of ours. I’m not going to reveal who it is but I will say he’s a supporter of both Wolves and Hibs so I suppose it’s in keeping with the perceived view of the vast majority of those clubs fans. After not seeing one of his first cousins for a number of years, he bumped into her at a family do. They hit it off. Too much in fact. That well that they ended up in bed. Now I’m not an Angel when it comes to my sexual history. Absolutely far from it but even I wouldn’t cross that particular line. I mean, he’s even checked to see if it’s illegal. Never mind that it’s immoral. Oh, and she’s married. I don’t know whether to be appalled or impressed. In reality, I haven’t stopped laughing since I was told about it. The bloke is a legend. The Sheffield Tap was, as always, the first place to get hit. We’ve even got a favorite table in there now. We were joined by Spoons, Ian, Darrell, Mikey and J.K. once their train had docked and the day was up and running. Jinksy had attended the vigil for the 21 Birmingham bomb victims. It made for a sober conversation but it really is scandalous how the families are still having to battle to get justice. It’s clear that there is still a cover up in operation. It’s also clear that the families are quite rightly, not going to give up. It’s an issue that unites Brum and the families have our support. We moved on to the Sentinel Brewery Tap. 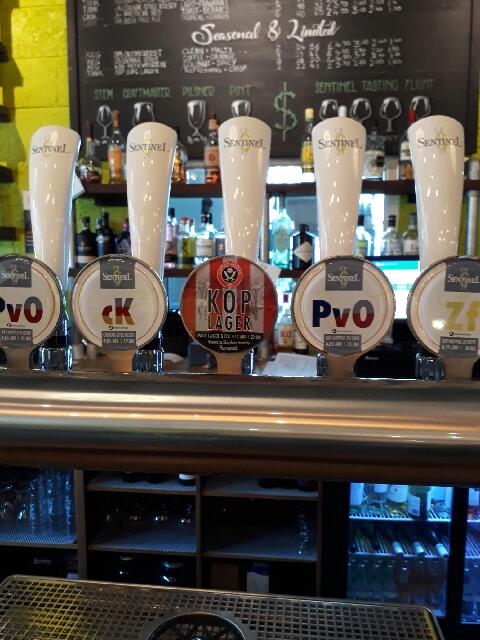 Blades territory by any chance?

I took this place in last season after the Rotherham away game. It didn’t seem as expensive this season. Mikey reckoned it was because I’d been to cheaper places first. I hadn’t thought of it that way. That’s why he’s a teacher by trade and I’m a Minion in a warehouse. Banana!!! Steve joined us off his train. I didn’t know until now that he’d not only been in one of the pubs that had got blown up minutes before but also shared his name with one of the victims. 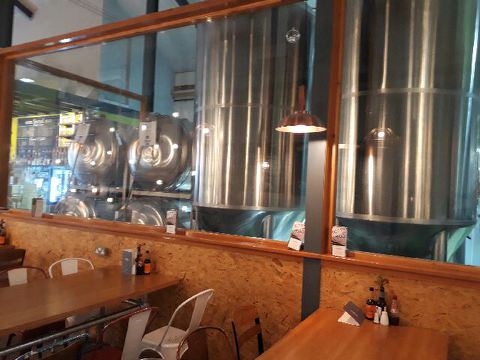 State of the art brewing. Just not as good as Churchend. 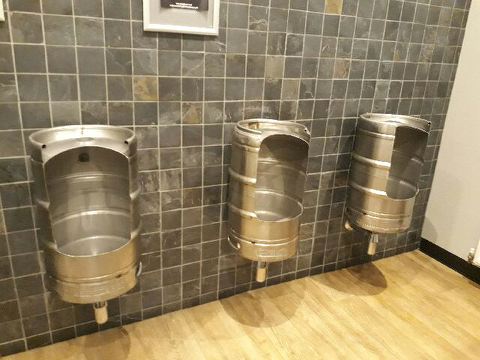 Another pub that produces Carling.

The Rutland was next. As I’ve stated before, my favourite. Talking of favourites, we all seem to have soft spots for different non league teams. Clubs we follow the results of. We decamped to the Devonshire Cat. Well, me and Steve were going to give it a miss to attack the pubs we hadn’t done in Broomhill. Nat shouted us back so we had one in there, just to say hello to him. Even then, we were only going to have a half in there and ended up having a pint. We did actually split from the rest then. Remembering it was a fair walk and it had started to rain quite heavy, we took the bus up the Glossop road. We must have been in a rich vein of conversation because neither of us recognised the stop we needed until the driver announced to us that we’d got to the last stop before turn round. Me and Steve are getting really good at doing this sort of thing. We walked back to where we should have been. Still scratching our heads as to how we’d managed it. The Fox and Duck was the first place we did up this neck of the woods. This was one we didn’t have time to do last time. It was definitely worth doing this time though. Excellent range and the place had a good feel to it. On to The York. A bit more of a sterile atmosphere in here though the fish dinners were rather pungent. The next place had impressed both of us last season and it didn’t disappoint this time either. The Itchy Pig is a micro pub that doesn’t pretend to be anything it’s not. 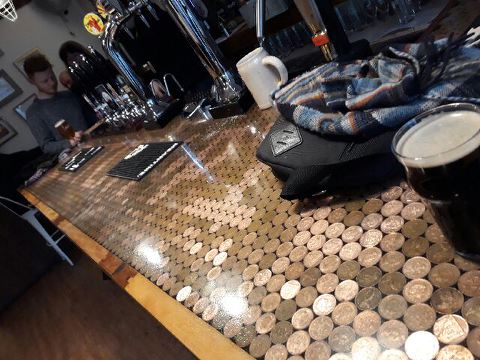 Clever use of 2p coins and if things go pear shaped, they can use them.

This place also does flavoured scratchings. I got a bag to go and stuck them in my pocket. Another pub we didn’t manage to do last season was next, The Broomhill. This was a proper locals pub and there was a fair sprinkling of Blades fans. Least we were on schedule time wise. We got the bus back down the hill, polishing off the scratchings on the way. We still had enough time to go back to the Devonshire Cat, so we did. Judging by the amount of Sheffield United fans in there, we’d got it just right. Nat had mentioned earlier that he’d been talking to Ol Bill drafted in from Middlesbrough. We’d even joked about being top of the football related arrests league two years running but I still wasn’t expecting the escort that they’d put on for us.

We made use of it and walked over the island in it. Knowing how these things get slowed down, we ducked back out of it and got in the ground. Overkill? Maybe, maybe not. Both clubs fans have played up this season so the fixture had that box office violence potential. I didn’t see anything go off but then, I wasn’t really looking.

We didn’t look like scoring and in all honesty, we didn’t look like we were going to get the ball, let alone keep hold of it. I thought I was safe to go to the toilet. Just as I’m down stairs, we score. Jeremy Boga, 1:0. I haven’t missed a game all season. We’ve scored 10 goals and I’ve missed three of them. With the way it’s going, I’m just happy that we’ve scored. 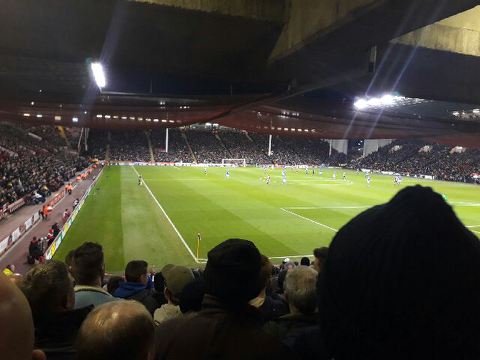 Half time and I saw the Noonans. Spoke to Steve and went back upstairs. I was a bit shell shocked that we were winning. It was never going to last. I’m only surprised we held on as long as we did. Not only that but we didn’t implode after Sheffield United equalised. They keep the ball well, always trying to move forward. Look worth their league position. I actually think we played them on a bit of an off day. I’ve since seen the goal and the keeper looks like he could’ve done better. Whistle gone and we’d doubled our points tally away from home and finally managed double figures in goals for the season. Was it a deserved point? Not really but then it wasn’t undeserved either. It was just nice not to have lost again. I just want to know why it is, if they’re trying every game, why it is that we’ve gained 15 points from the teams in the top half and only 1 from the bottom half. 9 points from the teams in the top 6. Smells as fishy as the food in The York.

We were confronted by a whole battalion of police outside the ground. As many as Millwall. As many as Villa at home. If Christmas lights are blue and fluorescent then they’d been switched on and they were lighting the way. All I wanted to do was go and get a drink. I’d got another two pubs I hadn’t done in mind. The first one was The Dog and Partridge. I noticed they were selling copies of Yorkshire’s Real Heritage Pubs. £5 each. I’d missed out on a copy in Doncaster last season when I was ground hopping there. I wasn’t going to miss out this time. I sat in the lounge flicking through it. Just up the road was my last drop in before the train home. 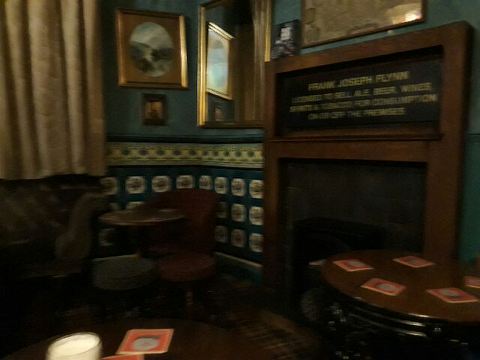 The Grapes was packed in the bar but totally empty in the lounge. I was starting to feel it was cursed or haunted until finally I was joined by another couple. Even then I half expected one or both to walk through one of the walls. Thankfully, they didn’t. I made my way back to the station to get the train home and bumped into Jinksy and Nat. Jinksy shared my headphones on the train back and Nat, well Nat crashed. It’s the only time he’s quiet. 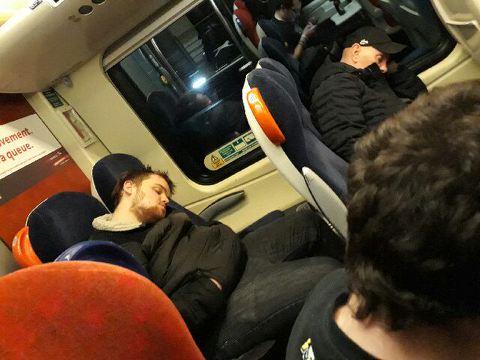 We woke him up at New Street. Otherwise, I think he’d still be asleep till after the Wolves game. Maybe even Christmas.