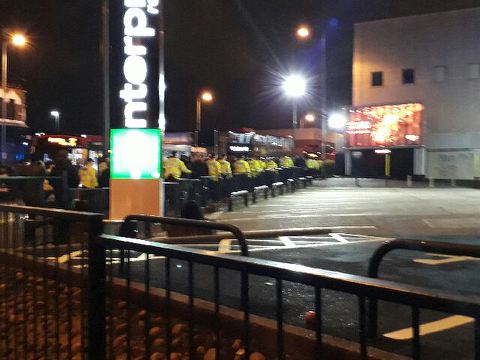 Wolves looked organised and confident. Runs off the ball. Passes with purpose. You could see why they were top of the league Blues looked the exact opposite. Passes went astray, tackles missed. The effort was there but we were running round like headless chickens. You could see why we were in the bottom three. Wolves scored but it didn’t look over the line but then I am biased. All supporters are when they’re watching their own team. Halftime and it probably should have been more. I got talking to Martin, a fellow block elevener, on the concourse. He said his missus had text him to say she’d watched it on Sky and it was over the line. You can’t argue with technology I suppose, even if I still do. He wants Garry Rowett back. I don’t. He reckoned that 80% of Blues fans want him back. I did a straw poll when I got back to my seat. Justin agreed with Martin but the rest didn’t. Second half started with Jota replaced by Gleeson. We were better organised and were better going forward too but we never looked like scoring. It had been a feisty game and the bookings started. Harlee Dean collected the full set. Two meant one and eleven became ten. It seems to me that referees favour teams at the top of the league. It’s not a conspiracy paranoia thing either, there’s a general consensus with fans from other clubs as well as Blues that this happens. I’ve been ground hopping watching clubs I’ve no allegiance with, and seen it. Anyway, it meant that Wolves could breathe a little easier as they saw the game out. They’d got their win. Hard fought but still a win.

For whatever reason, the Ol Bill had blocked my usual cut through down the back streets in to town, so I had to walk the long way back. I was that hungry I got something from McDonald’s. I was that hungry, I actually enjoyed it. I caught the 51 back from town. It was heading to Walsall. I assumed that that was where the three Wolves fans were going, who also got on the bus. They looked a bit flustered and lost. Did I mention rather scruffy too? And they wonder why we call them Dingles.