A couple of days previous, Steve had informed me that Cross Country were going to be on strike the day of the game. Having first, checked to make sure my ticket would be valid, secondly, finding out what the revised timetable was, I headed to Sunderland. I got down to New Street early to find that the train that was advertised as 9:03 to Newcastle, was now only going as far as Derby. Not a good start. A group of Blues gave up on the day. With beer time now at a premium, I headed for the Briar Rose. It was open but not to serve alcohol. I tried the Square Peg. The same as. Not serving until 9 o’clock. This wasn’t looking good. I toyed with the idea of phoning Si Noonan and asking if I could get on the disco bus, but settled on seeing how far I could actually get by train. I touched down in Derby to find that there was a train to Edinburgh in an hour. I and the rest of the Blues fans that had decided to risk it, headed towards the city centre. A bit of luck. The Victoria Inn was open. Half a dozen of us ventured in. Usually, this pub is home fans only. We were neither home or away, and it was ridiculously early anyway. After a pint of Bass and a pint of Castle Rock later, it was back to the station. Both Steve, who had decided not to risk it and Dingle Dave text me. I confirmed to both that I was still attempting the game. With seat reservations obsolete, I grabbed a seat in first class. I was never going to miss that opportunity. I would make the game but now my mission was to get another beer at least. I touched down in Newcastle. I asked at the information desk just to make sure the last train back, was still 17:44 from Newcastle. It was. It would be tight but would make it if I left the game early. I was confident that Blues would be losing, so it wouldn’t be much of a wrench. I headed downstairs to the Metro and caught the train towards Sunderland. Had the 9:03 been going to Newcastle and not just dumping us all at Derby, I’d have been able to do a couple of pubs but that wasn’t going to happen. Thanks to having internet on my phone, I got off at the Stadium of Light station and with phone in hand, headed against the flow of people going towards the ground. After a bit of a jog, I would just have enough time to throw one down my throat. I’d found The Avenue. An entry in the G.B.G. As I went through the door, I was confronted by a face, I never expected to see. I don’t know who was the more shocked. I think my ex’s eldest lad, was slightly the more shocked. It was good to see him, if I’m being honest. I always liked him. In fact, I was friends with him before my ex and it had been him that had actually introduced me to his Mom. Yet, I still liked him. It turned out, that the pub was L.C.’s (No, not Lee Clark) local. A really good place too. L.C. filled me in with what he was doing and how he’d been. He’d just turned 30, so I bought him a pint. If both us and the Mackems get relegated, then I’m definitely going back in there. Good range, kept well and there was tellys all over the place. I could have easily had another three or four in there but I said T’ra to L.C. and followed every one else to the ground. 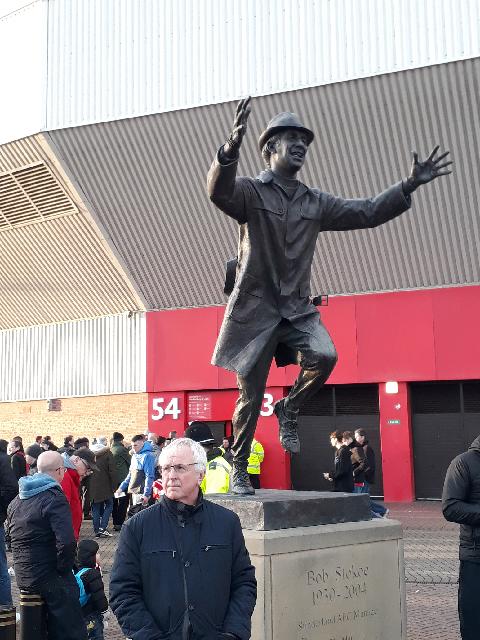 Another ground with a statue of a legend outside. That’s the bloke on the plinth, not the one in the glasses.

I walked virtually all round the ground before I saw the tell tale fluorescents. Not before asking one of them if there was any danger of us being kept in. I was assured that there wasn’t. Having got in ground passed a flat mushroom (A joke between the stewards apparently????), I climbed the steps to somewhere just under the clouds. At least they’d laid on some amusing reading matter to take your mind off the need for breathing apparatus. 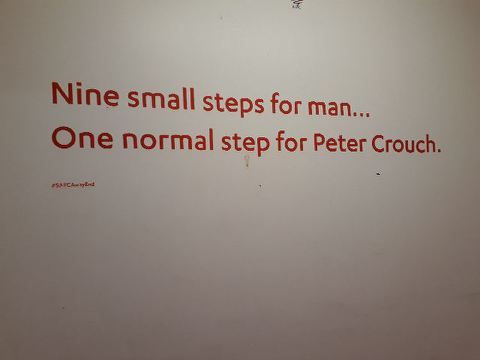 A mere shuffle for Nikola Zigic. 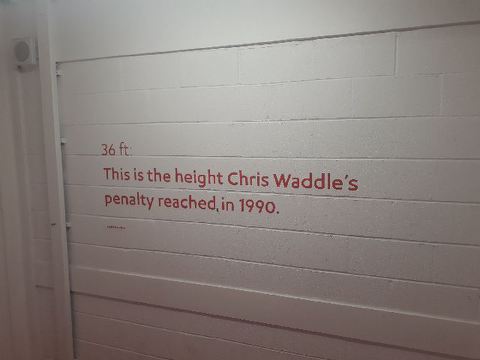 I bought a fairly tasteless meat and spud pie from the kiosk, saying hello to Daz and Sid who’d traveled up on the disco bus. 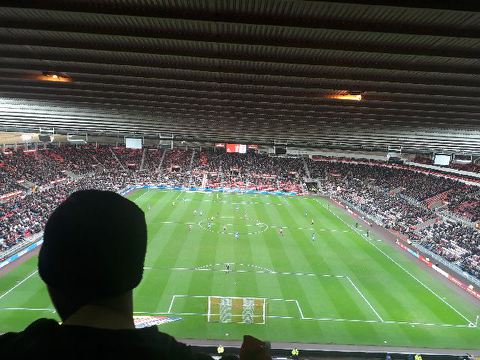 It was an open game for a change. The problem was, that it was an open game between two awful teams. If it wasn’t for the stands being in the way, I’m sure that both Jota and Boga would’ve tried playing even further away from one another. Somehow, Gardner managed to put a decent through ball to Gallagher and although he did his best to mess it up, the defender made an even bigger mess of clearing it, and even Gallagher couldn’t miss. Two goals in two games. Not just Blues, but Gallagher. Five minutes later and the advantage was wiped out. The game was still pretty much end to end but the standard of football from both sides didn’t point to either team getting out of this mire. They were both that poor, that I’m sure they were all competing for the worse player of the match award. Half an hour into the game and I was told by one of the Blues fans on the train up that the 17:44 from Newcastle had been cancelled. Great. Just perfect. I went through all the ways I could get home. Lack of internet service, didn’t help. Half time, I spotted Daz. Was there any space on the disco bus? He’d find out. I spotted Dave Moyna. He’d come up with Rob in the car. No space but he had still got his space on the officials, because they wouldn’t give him a refund. Unfortunately, his coach ticket was in the car. He reckoned that Sam would let me on. Might even remember what coach. Then I saw Spoons and Ian. A sight for sore eyes. If anyone could get back on a train, this pair would. Ian text a colleague on the railway for a way back to Brum. He suggested Sunderland to Carlisle and then back to Brum from there. I was convinced there was engineering work on that line. Spoons was suggesting Manchester and I had been told of a route through Liverpool. Whichever way, we would have to leave the game early. The second half started. Dave text me to tell me, it was coach 4. I have a side of my personality that likes to live a little dangerously. If you’re not living on the edge, then you’re taking up too much room (Or is that, Mushroom?) Gallagher got booked for simulation. Seemed harsh to me. I was about a hundred and twenty yards away mind. It just looked like Gallagher couldn’t stop himself from colliding into the keeper and ended up on the floor. Not a foul by either. If Jota and Boga were playing in a five a side team, I still don’t think they’d look to pass to each other, or even look to get in to position to receive a pass from the other. Spoons and Ian made their exit. So did Gallagher. Second booking. We were hanging on now. At one point, the furthest player forward was N’Doye. He looked like Bambi on ice. I kept an eye on the clock. Usually, Blues would have been losing 2:0 by now. Typical of them not to let me give up on them. Thankfully, Steve Cotterill knew what the crack was and took both Jota and Boga off whilst bringing Maghoma and Davis on. With no proper attacking nous on, I took this as my que to leave. 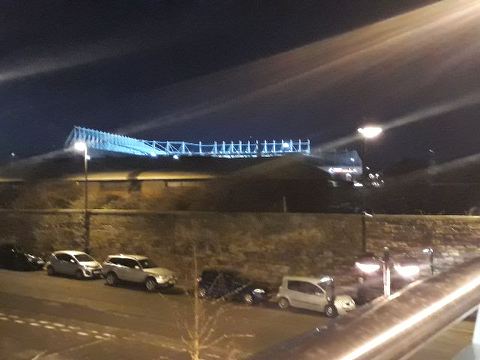 “Chuck a bit of art farty photography at it”

I got the Metro back to Newcastle. Blues had finished 1:1. Both Bolton and Burton had won. We really aren’t helping ourselves. As I got off in Newcastle, I Spotted Spoons and Ian again. We went to the Centurian on the station and plotted our escape route. Newcastle to Carlisle, Carlisle to Brum. Spoons had been a victim of a caustic soda splash back at work. His right eye looking very sorry for itself. Hazard of the job. The Centurian was a tea room that been boarded up for years. Meaning that the elaborate and ornate decor, gathered dust. Both the ceiling and tiling is extremely easy on the eye. The lighting they’ve used in there, make it seem like some kind of seedy nightclub though. The beer also being more inline with a nightclub too. We got the train to Carlisle. If I mention that it’s run by Northern Rail, then you know what kind of train turned up. On the journey, we got talking to an Annan based Blues fan heading back there and one living in Carlisle. This was one of those rare occasions when they would get home before us. The guard checked my ticket. We explained to her about the cancelled train and the journey up. She’d only heard about the Cross Country strike from another passenger on a previous service. Because Ian works for Network rail, he gets so many £10 anywhere to anywhere return tickets per year. Him and Spoons had been on the train since 7 o’clock that morning and had made Newcastle quite early. They’d used services ran by seven different rail companies. The denationalisation of the railways was to create competition. What it did, was to create chaos. Most people who travel on trains, don’t know how bad it is. Train ticket prices differ greatly from company to company on the same line and none of the company’s actually work with each other. Some, won’t even talk. When you have station staff, not knowing what’s going on, what chance have the passengers got? We had twenty minutes at Carlisle. Time for a pint in the station bar. We were told it had been shut at 6 o’clock. It was 7:30 and one of the inhabitants of the bar had almost a pint. Something smelt fishy, and it wasn’t the food. Reluctantly, we gave up. We got the Virgin service down to Brum. Virgin have an ale brewed for them. It’s not bad. We attacked the trains supplies. We whiled away the time discussing how the mix of personalities in our band of ale trailers works. We’ve all got different opinions on a whole range of different subjects and are respectful of each others opinions. We have a whole range of different things we’re all in to. Especially music. There’s not a single genre of music that at least one person doesn’t like. We look after and out for each other. There’s not really one particular leader. Democracy is very much the order, and talking of democracy, we have different political beliefs yet can debate without fear of reprise. The banter is only ever teasing. Each of us have qualities that are useful to the group and membership is by no means exclusive or all inclusive. No passport photo needed. Just a bunch of friends of all ages and backgrounds, enjoying each others company. Oh, and good beer. It had been an eventful, long day but strangely, a good one and we’d made it home.