A 12 o’clock Sunday kick off meant an early start for what is essentially, my nearest game. A potential five minute walk was abandoned for a bus and train journey, liberally sprinkled with a few pints. Not as many pints as I would’ve liked either. I got off in town, getting my train ticket for Witton, so I didn’t need to get it later. I took a slow walk up to The Figure Of Eight, the Wetherspoons on Broad Street. The idea, was that as it would be the quietest Wetherspoons outlet in the city centre, it would be the best chance of getting served. After taking in the local architecture that I usually rush pass and take for granted, I met up with Steve, who was waiting outside the door. It was about five to nine. After asking the barmaid when they’d be serving alcohol and feeling like I’d got a nonexistent drink problem, we sat at the nearest table to wait the four minutes. At least it was warm. We weren’t the only Blues fans in there but most in there were Villa. Team sport has its origins in tribalism. You can refute that if you want, but it’s true. There’s no getting away from it. That’s why the vast majority of local derbies are so passionately fought. It’s them and us, in its rawest form. There is always subtle differences between clubs identities. Villa fans are different to us. Not in the disparaging kind of way, I might add. No mickey taking here, just observation. Things that us Blues supporters see as qualities, Villa fans don’t understand. Not because they lack intelligence, but it’s not in their psychological make up. We view them in a similar vein. We don’t understand their football allegiance and what they value about their club. After chewing over the previous days football results, we walked back into town and to The Wellington. It was all Blues in there, bar Dingle Dave. J.K. was on a beer with a purple hue. It looked similar to Darrell’s cider mistake. Carol, Jeff and John landed, as did Jinksy and Mikey. We let Mikey know where and when to meet for Brentford away and he remembered, he hadn’t ordered his ticket, so he did it on his phone. Dave mentioned that if Wolves win their next game, they can’t get relegated. Like us with Blues, his optimism with Wolves, has taken a right battering over the years. It is actually dawning on him that Wolves are actually a half decent team this season. Half decent enough to win the championship at a canter. Effectively, they only need to win half of their remaining games, to win it. I can’t see them winning half their games, they’ll win a lot more than just half. As the conversation ebbed and flowed, a certain person amongst us admitted that they’d had to call it a day with their cousin. Apparently, the sex had been amazing but that their cousin had become too clingy. She’d taken it hard. . . . . . literally, by the sound of it. We made our move to the station. I am never going to enjoy an early kick off, never mind one on a Sunday. Everything is rushed and snatched. No slow build up, an eye on the clock. It’s not civilised, but then, football fans are still not really seen as civilised. Viewed with suspicion, treated with contempt. Our civil liberties taken away from us on a regular basis. A living legacy of a previous generation. J.k. was off down to the platform before we’d had the chance to tell him he was getting the wrong train. I say wrong train, it was one that would be full of Villa and we’d get there slightly earlier. I saw Si Noonan but not Rob. Rob couldn’t make it. On the short train journey, we talked about the age old Blues/Rangers and Villa/Celtic connection thing. There’s a little cross over but the roots of both clubs were in the two religions. Blues/Protestant and Villa/Catholic. It’s much more a football allegiance now but it’s still there and probably points to another difference between us fans. We touched down. 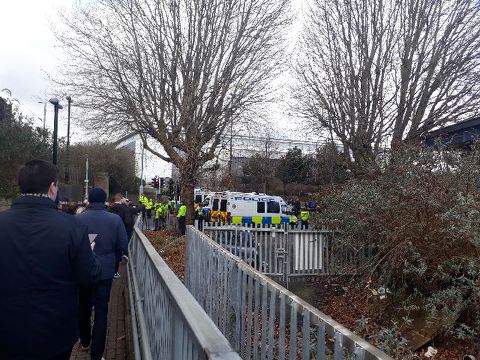 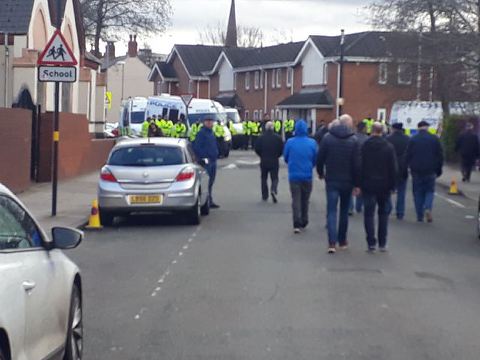 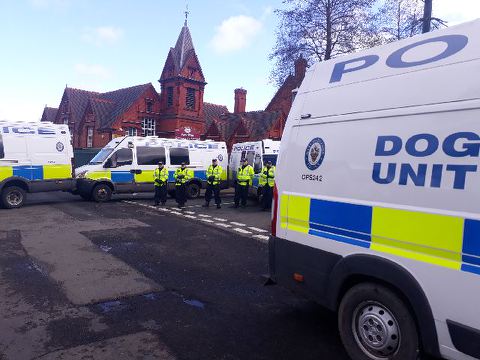 Yes, even in the toilets. Even in the ladies, I was reliably informed.

I paid £25 to be treated like a prisoner. The only thing that was missing was the shackles. The “Frisking” I received was distinctly over-zealous. He couldn’t have stripped my sense of human rights away any more if he’d have put surgical gloves on and done a full cavity search. That’s the crux of the matter though. We have no human rights. The authorities can do whatever they want and we have no voice, no platform for protest and they know it. Stationing officers in the toilets was oppressive at best, disgusting at worst. Were we spectators at a sporting event? Because it certainly didn’t feel like it.

I stood with Jinksy, Nat and Mikey. Villa were all over us for the first twenty minutes. We were hanging on. Each minute feeling like an hour. We finally managed to work out how to cross over the half way line and then preceded to for the next 20 minutes. Chances were at a premium but one in particular stood out, and it fell to us and Gallagher. On another day, it would have hit the inside of the post on the way to the back of the net. On another day, it would have rebounded off the post in such a way, that Gallagher could’ve finished it off. It wasn’t one of those days. Instead, the rebound came back at him too hard and he couldn’t wrap his foot round it. The second half was totally different. Villa sat back, soaking up our lack of invention. Although he made an attempt to relieve Grealish of one of his feet with a crude tackle, N’Doye looked like a bloke that had been signed up in the pub the previous evening because we were short of a couple of players. He never got anywhere near any of the Villa midfield. To my knowledge, he could still be running around the grounds of Aston Hall, chasing (And not catching) pigeons. As a midfield enforcer, he made a damn good lamppost. In fact, had he just stood still, he’d have been more effective. They scored. As a football fan, there’s no worse place to be, than your nearest neighbours ground, when they score. The feeling is sickening. There’s no where you can look. The painful thing, is that we didn’t respond. Didn’t look like we were going to, or even could, equalise. The only one bit of true brilliance, finished us off. Much as I don’t want to put this, their second goal was a bit special. It’ll be one that they will talk about, for a good few years to come. I hope I never have to see it again, but I will admit, it was good. N’Doye got a second booking and thus, got sent off, in the dying minutes. I left when the added time was revealed.

I got the train back to town with Russell and then the number 50, getting off just round the corner from The Spotted Dog. J.K. got the Mayo Gaelic football game on, but I couldn’t get into it. Mikey and Darrell landed and then, Jinksy. With the Gaelic football finished, we got the screen turned over to the Scotland v France six nations game as they were winning. I don’t remember how, but I ended up talking social politics with Darrell and Jinksy. I decided to call it a day and get myself off home. I came back out of the toilets to find a Villa fan who obviously hadn’t been to the game but had watched it on the T.V., trying to get a reaction out of the rest, by talking rubbish. They really aren’t like us. They’re not magnanimous when they win. We’re almost apologetic. I just looked at him and shook my head. On the bus home, I could hear a Blues fan downstairs, a little worse for wear. The last thing I needed was aggravation, I just wanted to get home. By the time I’d got to my stop, he was offering any Villa fan who fancied it, a straightener with him. He would’ve took the whole bus on. Another difference between us. Rightly or wrongly, we’ve definitely got the more volatile fans. Still not enough to vindicate the policing though.