As predicted, there was snow in the air. The beast from the east. It was also Paddies day. Great planning. I got into Brum and scuttled off up to The Wellington. Worcester Pete and Jinksy were already in there. Jinksy bought me a pint. More of what happened directly after the Brentford hospitalization came out. Either that, or I had got back to a stage where I didn’t need instructions any more. With the process of mending, every day is slightly different. You’re a little bit more forward than you were. You ignore thoughts about how clueless and clumsy you actually were but you look at everyone else thinking you’re capable of being at their speed when it’s obvious your not. Like a toddler who wants to run but hasn’t actually quite managed how to master the walking bit. we commandeered what is starting to become our table without us actually realising yet and were joined by first Steve and then J.K. J.K. was less conspicuous in his Mayo shirt than usual. Except that the day gave us more excuse to pretend he was a plastic Paddie. Who needs friends like us? We left the Saturday shopping scrum to itself and moved on to The Woodman. Paul joined us. It had been the first time since I’d seen him at Vauxhall. I wondered/hoping it would maybe trigger any memories at all with what happened. Not a thing. Not the slightest little thing. I’ll just have to look blankly when people ask me about what happened. I have quite got the blank look off to a fine art, so that shouldn’t be a problem. We moved on to The Digbrew. By the time we’d got here, the snow was not only making itself known, it had become annoying. They’d even had to put the shutters down on the Digbrew unit. We had actually thought it was closed at first. It’s still in its infancy so it wouldn’t have been a total surprise had it been shut. Thankfully, it wasn’t. Bryn and his Son were already in there. I had a quick chat with them. They were talking about how bad some football club owners are compared to how they conduct their own businesses. I liken most football owners to supermarket customers. They know what they want but once they’ve picked up the basket or trolley, they end up getting side tracked. See things they like but don’t actually need or even want. Owning a football club has so many factors involved. So many variants that can go wrong. The owners ego gets massaged. Depending on the owners psychological personality, it can go wrong. Drastically wrong. I’d like to think I’m an aficionado of the game these days, I’ve been around long enough and certainly been obsessed with the sport long enough. Read the books, got the t-shirt, (Gave up with the brand new replica club shirts, cheaply made, expensively sold. Workers exploited, go to a charity shop and buy second hand ones and you’re helping the charity) If only the Euro lottery would be nice to us, my fellow blog writing, ground hopping Nephew will show you how it should be done properly. We were blessed with the first ever visit to Digbrew by Spoons. The Digbrew is a work in progress but definitely trying hard. Spoons is definitely someone they could learn from. I’m like a kid meeting my favourite player when I listen to Spoons talking about brewing. He was in there, not only to check the place out, but with it being Paddies day and also, England were playing Ireland in the 6 nations. Even Spoons didn’t fancy his chances in the Spotted Dog. We made quick plans to meet in Digbrew after and scuttled off to The Clink. The weather had definitely made it a day for scuttling. We grabbed our usual shelf in between the door and the fridge. We could’ve done with a nice open coal fire. With the Spotted Dog being off the agenda, we walked up to the ground. With the extra only £10 to get in fans, and it being another new managers first home game, (This one being Garry Monk) we thought it was wise. Programme and fanzine later, I was in the ground.

My recent absence had been noted and the snow had put a few of the season ticket holders off. Or was it yet another change of manager? Cotterill wasn’t that well liked. His press conferences were very much Clarkesque, and his football as bad as Rowetts but it wouldn’t have mattered who they had put in charge, you become expectant of the proverbial socks at Christmas. Talking about expecting, I have no enthusiasm any more, so I’m trying hard to do this do a service to this game. 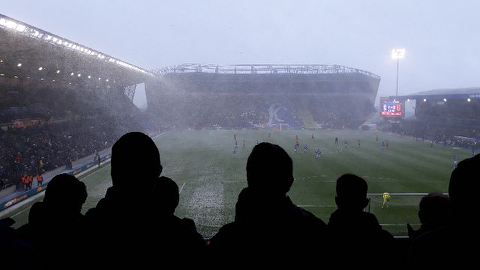 Do not adjust your television.

There’s no disrespect to any of the regulars around me, especially as they’ve had to watch the same as me, but I haven’t been exited, interested or expectant with a home game since Chris Hughton was manager. When the prices are full prices and the gaps around the ground make it feel like some kind of friendly or early round cup game, which is most games, the atmosphere is actually the worst I’ve ever known. How so many people can make so little noise, I don’t know. Has it been any surprise that Blues have been on the downward spiral they have? How do players become enthused. How do we become enthused with the players? The club needs a great big shake up. A manager with the same vision as the owners. Owners with the same vision as the supporters. Supporters having the same vision as the players. Everyone acknowledging each others identity. Sharing that identity, respectful of each others identity. As a club, we’ve become so fractious that it just isn’t enjoyable anymore. We scored, I celebrated as I usually do a goal but with something missing. I didn’t leave it at Vauxhall station either. It had packed its bags and left, way before then. Hull looked like they weren’t bothered. Like they could afford to lose this one and not worry. I wondered if their fans saw it that way. We scored another couple in the second half. We actually hadn’t played that well since the second half versus Leeds. I hadn’t really enjoyed it though. It was a win. A comfortable win, but I wasn’t feeling any better than mildly satisfied. We hadn’t lost. I saw the Noonans as I was coming out of the ground. They had gone from being apoplectic the previous week at Cardiff to swaggering out into the swirling snow. Being Blues, I’m pessimistic anyway but I can’t help thinking we’re just lurching from one chapter of ineptitude to yet another.

The hasty plan of going back to Digbrew wasn’t for me, the snow had got to me and I wanted something to eat. I just made the bus from town and warmed my hands on a big bag of chips.