Coming out of my flat, I found myself having to run to get the bus. It’s something that my body is definitely complaining about more and more these days. I could go on a fitness regime to be able to do this sort of thing quite easily but as I’m not interested in eating healthily, spending time at the gym or out jogging, my mind is going to have to realise that my body just hasn’t got the basic requirements to run for a bus anymore. As with it being a British Bank holiday, it was keeping with tradition. Rain. Town centre was inhabited by a skeleton of bank holiday workers. Most trying to contend with an altered bus timetable. As I hunted for an open paper shop, I was enveloped by foreboding. I had forgotten my headphones. It’s a cruel trick that our minds play on us. Only when we’re safely far enough away from where the item we need is, are we allowed to remember it. Always too far away, with not enough time to go back to get it. Even with having a decent paper to read, I couldn’t shut out the annoying banal conversation, my ears were having to contend with from a group who couldn’t shut up. I got off at a very wet Preston, to change for what is now, another British Bank Holiday tradition, a rail replacement bus service. Twenty five years of continual neglect by successive governments before incompetent private companies were allowed to take over. As Preston North End were at home, there was a heavy police presence. I went for a mooch, just to kill some time before the bus to Chorley. I wasn’t aware until I looked at the fixtures, that Preston were at home to Derby in an early Sky game. The fixtures have been chopped and changed so much by both the media and the influential, mega millions owned clubs, that they’re all over the place. Money talks regardless of whether what is being said, benefits the individual and not the majority. The highest paid, most pampered players have to have more than 48 hours recovery time because their value is too important to overstretch and burn out. Never mind that supporters have to completely alter their lives. Loyal, committed supporters who have the temerity to want to watch their club at whatever venue the clubs playing at, are now an inconvenience. The sterile, faceless media viewers are where the new money is. Subscription is a much more attractively lucrative option to the season ticket. A season ticket that is just a credit card. A number. A voice that doesn’t get heard. It won’t be long before your game will kick off at a time that will be in the early hours of the morning, because it’s being shown live in the afternoon, in a country the other side of the world. It won’t matter that the attendance will be a record low, just as long as the television revenue will be the highest ever received. Money talks. My Nephew Dave was holed up in The Henry Tate Wetherspoons when I got to Chorley. Chorley is such a comfy town to live in. I’m not surprised that he met his wife from there or ended up living there. We launched into conversation. We just don’t meet up often enough. It’s something that since my accident, I’m vowing to change. We moved on to Pearsons. A Marston’s pub. After a quick one, we went to our first micro pub of the day. Chorley is a town that has embraced the micro pub phenomenon. Every time I go there, at least another two have sprung up. The first we went into was The Shed. I wondered how many people would claim they were going to their own shed but were actually going to this place. This place wasn’t your usual shed type place though. More a coffee shop/wine bar feel. The beer had peach back notes with fuggles hops coming through. Next was The Toastie Tavern. They had a rack with bookies slips in. As they were from BetSid, I had to have one as a souvenir and proof that the place actually exists. On the way to the ground, I was able to say hello to my niece in law Steph and dump my bag. As they had had their wedding reception and also the kids christening do at the club at the ground, I’ve wanted to do a Chorley game.

Bet Sid What? What do want to bet me? 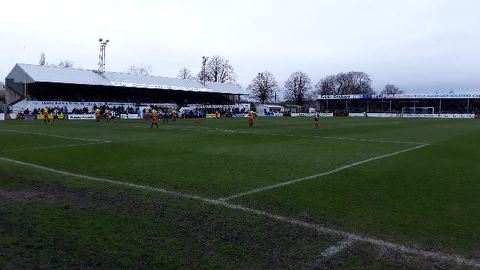 A ground worthy of being in a higher league.

Both me and Dave have day dreamed about owning a football club. A small club that would benefit the community and climb the leagues and be successful. Chorley is that club. Chorley is that town. The people are proud of their town. The businesses are proud to be associated with the club. Dave had already seen what I was now seeing. I would and could never stop supporting Blues or Hearts but talking with Dave, we share the same ideals and ideas. We definitely could make Chorley work. I could also see us working with what they’ve already got in place at Chorley too. None of the egotistical dictatorship owners that are in place at some clubs. None of the colours changing, badge changing, name changing, stadium relocating on a whim. I dislike out of town grounds that are nowhere near a train station. They shouldn’t be allowed to be approved by a council unless all transport links are already in situ. The movement of supporters to and from the stadium is the most important thing about a stadium. There is far too much reliance on supporters having cars. Local public transport is ignored. Try going to watch Oxford, Reading, Wycombe, Forrest Green, Coventry, Leeds, Bolton, Doncaster, Northampton, Milton Keynes. On to the game of football we were there for. Chorley were playing the better of the two teams, so it was no surprise that they took the lead. Thoroughly deserved. The rain started to come down again. I had been earlier concerned that the game would be called off. A lot of others, including the Moors game at Tranmere that the other ale trailers were going to, had fallen foul. We moved round the ground to the other end. There was none of the pitch protection at the lower levels. There’s little money that gets filtered down from the Premier league and what is filtered down, is done so reluctantly. There’s not enough help given by clubs from the Premier league not just in terms of financial help but also in technical help. Both the F.A. and the Football League should be pushing and working towards a level playing field. None of this them and us scenario that exists between the two associations now. The whole of football in this country should be working better with one another for the good of the games future and not just trying to get as rich as they can individually, as quick as they can. As Chorley got their second, I noticed there wasn’t the blatant cheating that you get at the top level now. None of the gamesmanship. No shirt pulling, no positional fouling. There wasn’t any of the snide time wasting that goes on. It was good honest football. Played by players that weren’t being paid anywhere near the thousands that the top players get paid. Players who hadn’t got the state of the art club gyms to train in. Players with second jobs who weren’t just going through the motions before jumping into their sports cars and driving to their huge detached house with the remote controlled gate, somewhere miles away. It had been a good game of football between two teams who were trying their hardest. It might not have been too far away in terms of league positions but in reality, the haves and have nots in football have never been further away from one another, as they are now.

A pub, that you never want to leave.

Leave it we did. We had a roast dinner to get home to. I can’t help but add, it was extremely nice too. Well worth leaving a fantastic pub for.