It was a lovely day, weather wise. Recovery with my head injury is certainly not straight forward. I get really good days and really bad days. Like Blues this season, but not with as many managers. The previous day, I’d had a bad one. I was still feeling fragile. Hitting town early and the weather being rather pleasant for once, I took a slow stroll round the financial bit of town. I was still in The Wellington before anyone else though. I was joined by Worcester Pete and Taffy. We chatted about the present state of my head. It’s very much play it by ear. Though one of my ears seems to be working on reduced wages. We were landed on by some of the Norwegian Blues. It’s always good to see any of the Scandinavians. This lot show proper commitment in my eyes. It’s not like jumping on a bus to get to a game. It’s not like we’re even successful. Two major trophies in our history hardly points to glory hunting. We turned to beer talk. Not your fizzy mass produced tasteless rubbish. I was on a triple choc stout. Jinksy and Steve came in and the conversation turned to football. I couldn’t remember if Steve had a spare for Q.P.R., he had. I went outside to phone L.J. He sounded more fragile than I’d been feeling. A heavy previous night on the chemical fizz. He couldn’t make the game and had to ring off pretty sharpish to paint the inside of his toilet bowl with the contents of his stomach. We’ve watched enough appalling Blues performances down the years to have given up and left the game before the end many times but only one of us, (Not me) exclaimed they were off to buy a Lawn mower. That particular game is now folklore now. It even has it own commemoration. That’s all I’m going to say about the bizarre matter. With the weather being nice, we made use of it and sat outside of The Woodman with Mikey. It’s at the stage of the season where the better teams are in with a chance of converting their good work into trophies. I like the way one particular team play their football however, it’s completely wasted on its fans. A set of supporters that I cannot abide. If you’re expecting them to be our nearest neighbours, you’d be wrong. Very wrong. These lot deserve to be lambasted in a post on its own. Not in this one though. It was on to a new place. Kilder is a Clink like craft ale joint. It’s bigger and does food, though it was still in the process of setting things up. It’s also a lot nearer to town. I can definitely see this place taking off. It’s definitely going to be one I’m going to use in the future. 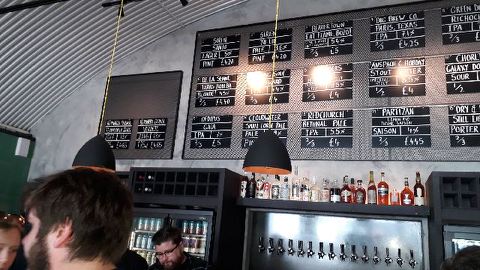 No Carling. Not even craft Carling.

Ian and Rich were checking the place out too. Quality attracts. By that, I don’t mean quality of clientele but the quality of the beer. On to the Clink and there was a beer with the name Jambo in it. I couldn’t help myself. It was calling out to me. I had only had a packet of crisps so I left for the ground to get something to eat. I would have had to have been that hungry, I would be eating my arm before getting something to eat before Brentford. Since, I’m so much more mindful. Not eating properly, or even at all, caught up with me. Well, the floor caught up with my head. As the Tardis isn’t available, I can’t go back and find out exactly what happened and why, but my theory is that not eating properly certainly didn’t help and I certainly ain’t going to get better if I keep ignoring the need to eat. I had a street vending version of a double bacon cheese burger that had probably been cooking on and off since 11 o’clock and then made a move to get in the ground. I was early. I’m known for being a bit late these days. In the days of novelty and hero worship, I would have been in to feel and see the build up to kick off. Those days are long gone. My fellow season ticket holders were surprised to see me, as much as I was expecting.

Sheffield settled the quicker and took the lead. When Lee Clark was under austerity measures, Mark Duffy was one of those players that had been brought in but hadn’t quite fitted in. He was discarded when his contract had come to an end. His reaction showed that he hadn’t been happy at being discarded. He was milking his moment. I could understand being disgruntled with the club but couldn’t understand why he was taking it out on us fans. An equaliser soon after from the unusual source of Roberts helped though. Although both teams were fighting at opposite ends of the league, the game was a lot closer than the false positions seemed to point at. The Blades had worked hard to be where they were but in reality, had probably over achieved. Us on the other hand. . . . . For the neutral, it was a good game. To the committed, there needed to be a winner. Maghoma was put through and he finished. Something that he had been known to bottle, depending on the occasion. He’s been a different player since Christmas. He actually looks like a proper player. Someone who cares and isn’t on a jolly up. Like a twin brother, we didn’t know about. We collectively, sarcastically, asked Duffy the score. It was very much kick it anywhere after the goal. Willing the time to run out. Watching the referee intently for decisions. The scores going our way just added to the importance. Football is supposed to be entertainment, yet as fans, we clamor for that final whistle, when we get taken over by the moment.

I came out of the ground elated. Considering the season we’ve had, and that at times, I’ve been convinced that we were dead and buried. Relegation, a certainty, we were not only in a position that we could get out of this, but quite a strong one. A win at Q.P.R. and we could break the proverbial cigars out. All I could do was smile. Not because we had won, but because Blues had done it to me again. You can never gloat and you can never give up. A uniqueness of the club. I went back to The Dog. We’d took over the big table in the garden. Life was a happy place. Not quite contented, there was still work to do, but it was close. We had faith and belief with what was going on at St Andrews. With the F.A.Cup semi-final being on, we drifted in to watch it. I wasn’t particularly interested as I don’t like the way the one teams manager is getting them to play. Mourinho and Klopp should change clubs. Their style of football just doesn’t fit with their clubs fans. With the game just being a minor distraction, mere background music, me and the Blues/Rangers lad that I can never remember the name of, talked 80s Blues, whilst Jinksy listened, either enthralled or bored. I drank up and happily got myself off home.