I ran for the bus. With my ongoing recovery, I thought hard and quickly before I did so. This was the last away game of the season. That’s not why I decided to run for it, by the way. This was going to be my last trip. On the one hand, it had flown by, on the other, it had been eventful. All seasons are when you actually make the effort. I will post a review, once the dust has settled and I’m twiddling my thumbs. I’m unsure whether I’m going to carry on with my blog next season, and no, I’m not waiting for someone to beg me to carry on. A bloke who I work with, will have to use some other literature, to help with his daily bowel movements. I had enough time to get something to eat from McDonald’s. For someone who doesn’t use these establishments usually, they’re confusing. Every time I go in one of these places, it’s changed, updated, made quicker for the gadget reliant. One of these days, I will be served by a computer and robot whilst a scruffy youth, behind me, covered in acne, waiting to get served, sighs at my ineptitude. Normally, it’s cheaper with advanced tickets, to head down from New Street and return from Marylebone. It was the other way round with this trip. There was no Blues around. I even checked my tickets again to make sure I’d got it right. I even wondered if I had enough time to go and get a copy of the Guardian for the train. In the end, I didn’t need to. The train pulled into the station and I spotted the lads. I joined Spoons, Ian, Darrell and J.K. and then Mikey joined us at Solihull. one of the threads of conversation that we passed the time away with, concerned Blues strikers. The fact that we’ve never really had any prolific ones. Never mind your 30 goals a season ones, most seasons ours struggle to get into double figures. We just don’t produce them, don’t stick to us, and have an unerring ability to disappear, after being prolific for other clubs, and then go on to be prolific for other clubs afterwards. Like a football Bermuda triangle. We walked to the Met Bar, a Wetherspoons close to Baker Street. After that, we hit the tube. I was expecting to get either flashbacks, or be gripped by panic. I had nothing. Not a thing. I didn’t know whether I was relieved, surprised or worried that I hadn’t had a reaction. It wasn’t Vauxhall, so maybe that was it. I was determined to take it a bit steady, just in case. Our first destination was shut and in all honesty, the choice of ales we could spot, spying through the window, was fairly uninspiring anyway. I joined Spoons in getting something to eat from the McDonald’s on the corner, down from The Lyric. A completely different set up from the one in Brum, but no less confusing. We went in The Crown first. 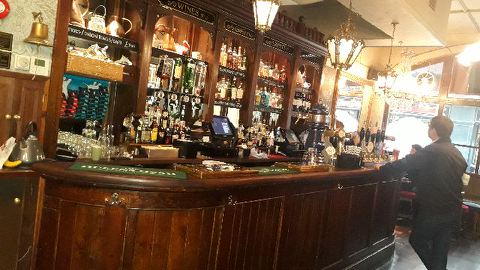 The barmaid was expecting Spoons to plump for Robinson’s Trooper. Spoons is nothing, if not a total surprise. He doesn’t fit, and rebelliously, never will, the stereotype. You won’t be amazed by that build up, that he chose something else. I’m not a huge fan of Trooper, though I love the history behind it. Look it up if you’re interested and intrigued. The Lyric was next. A great pub and one me and Steve went in after one of the London games of last season. It was on to the Coffee Shop

No coffee, but plenty to catch your eye.

The only clock that mattered once.

I had to explain to Mikey, what this was, and how it worked. I even had to explain what happened before these were invented. It’s all computerized now, especially for a teachers salary, but I still fondly remember those days. I certainly miss the weekly pay slip, complete with the money that came with it. It’s just a sterile monthly bank transaction now. This is a pub I’m heading back to though. I didn’t see everything, a veritable collection of social history. An afternoon browsing the things on display is a must for anyone into their modern history or someone in their later years, like me, who harks back to their youth. We battled through tourists and shoppers to the Argyll Arms. A typical Nicholsons pub. Not one of the better ones, but better than your Brewers Fayre, or Hungry Horse. We got on to public speaking and the Camra AGM, I could understand why it isn’t for everyone, whilst Ian was more critical. We also got on to Cunk on Britain. A brilliant brilliant parody. Something I suggest watching. We got back on the tube, still no reaction, we got off at Notting Hill and visited The Champion.

Spoons with a glass of champagne.

The Champion is more your up market, middle class/Yuppie friendly kind of place, not for me.

Did he, or didn’t he? It’s not like you could ask him.

We got back on the tube to the ground.

Loftus Road is not only the worst ground in London, it’s the worst ground in the country. The policing and stewarding is the worst, and the ground is an abomination. By the time I had got to the turnstiles, I had had my ticket checked three times and had been searched twice. Tempers were getting shortened. Patience was, at best strained, mine included. By the time I had actually made it to roughly where my ticket was stated for, I’d had enough. I spotted, or more they’d spotted me, Steph, Just and Dave. That would do, I stood with them. You had to stand, because the sight lines were so poor. 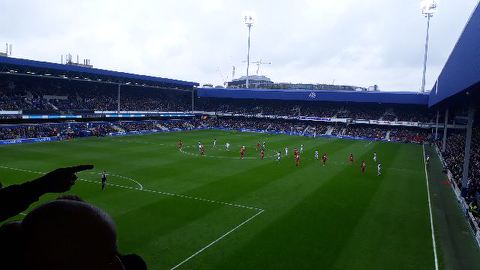 Safety certificate out of a Christmas Cracker.

The game started but the Blues didn’t. Remarkably, we scored. Unremarkably, they equalised. The unbridled joy, short lived. We played like someone had tied laces together, put boots on the wrong feet and dipped others in cement. We looked scared. Too nervous. The occasion had got to us. The cigars were put back. Half time and I hoped the dressing room talk would be inspired. It wasn’t. Chances weren’t falling for us, not enough bravery on the ball. They scored again. We didn’t look the same side that we had since Monk had taken over. Holloway did a good job on us. Nullified the attacking menace of Jota and Maghoma, left the lack of attacking nous of Davis and N’Doye, to it, and targeted the lack of experience of Harding. If there was to be another goal, however much we wanted it to be us, it wasn’t going to come from us. The third finished us and me off. I made my way out of the deathtrap waiting to happen, and headed for the tube. I caught up with a despondent set of Noonans and then as I carried on, caught up with Daz, George and Sid. There was a spare seat on the Disco bus, but I didn’t fancy it. I wanted to fit in another couple of pubs before the train.

I went looking for The Angel Of Bow. Where I expected it to be, it wasn’t. I was starting to lag, so decided on just doing The Wenlock. A great pub off the beaten tourist path. I was wearing a hoodie, I actually bought off the second hand clothes stall on the market, specifically for the Stone Roses gig two years ago. It made an impression on the barman though, who was full of genuine appreciation of it. It’s a garment, I only trot out, every now and again, usually on special occasions. That way, I can keep it in good condition and get the wow factor. Proper vintage eye catcher. I got back to Euston with enough time for one last drink and something to eat. 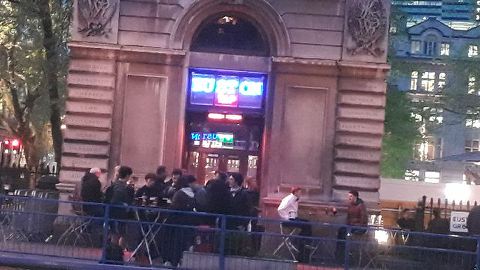 Micro pubs, they just get everywhere.

The Euston Tap is just out of reach of the Carling brigades lack of imagination. I had a half of cider (No, not that Dark Fruit fizzy rubbish) outside in the pleasant evening fading light and joined the throng of commuters on the concourse, searching  for the imfo, they needed for their train, pasty in hand. For that person with the dry sense of humor, whom I’m not entirely sure, is interested, or not, it was a West Country Ham Hock and Cheddar cheese one. Once on the train, I wedged my headphones in, and fell asleep, waking up just in time to get off back in Brum.