I shouldn’t moan that Sky saw fit to televise the game, I could still get back after the game. I shouldn’t moan that Sky saw fit to televise the game, Friday evening saw Middlesbrough at home to the Baggies. The population might be friendly, and the place is enjoying an explosion of micro pubs, but you wouldn’t want to have to stay over. I know, I did, last season. Moan I will though, Sky show the fans that trapse to the game, nothing but contempt. I have grown to despise Sky, and how little thought that goes towards the supporters who watch home and away. Each season, each contract renewal, brings even more games to be rescheduled to accommodate Sky, or B.T., or whatever new media vehicle wants to cover games. I’ve grown bored, it’s past saturation point. I got into town, and hit New Street, to get my train ticket. Heading to go and get a lottery ticket, I saw Ian. Wearing shorts, he looked more ready, for a rave night, than a trip to Nottingham, to watch Blues. We both hit the bookies, I don’t know why in my case, I never win. We got talking about Northern grounds, how they just seem more traditional. They’re probably not, just seem that way. We headed back down to the usual meeting place, and were soon joined by J.K., and then a hungover Jinksy. Mikey was the last to arrive, strangely without food. A Wolves fan went passed us. We preceded to rip, how fickle Wolves fans (Except Dingle Dave) are, apart. As I’ve pointed out before, each clubs set of fans, have their own personalities. Wolves could be on a three game losing streak, win the forth, and they will be claiming that they will win the league. They could be on a five game winning streak, lose the sixth, and they will be bleating, they will be getting relegated. It’s how they are. New Street station is the busiest junction outside London, it means that there’s lots of different supporters that go through it, having to change trains. The eyebrow raisers, are the single obscure ones. A Rochdale fan for instance, when you know they’re playing at home. We got the train, talking about non league football. Amongst other strains of conversation, it came out that someone, (Jinksy’s Mom) had discovered that Clare Balding, looks like Sandra Burke, from Fat Slags (Viz comic) fame. I actually quite like Clare Balding as a sports presenter, but the similarity is spooky. J.K., found the comparison photo, that had been sent to him by Jinksy’s Mom on Facebook, and contrived to drop his phone on me, had it been a Nokia 3310, it would have done some serious damage, requiring medical treatment, as it was, I barely noticed. We touched down in Nottingham and made our way to The Crafty Crow, opposite the gates of the castle. A Magpie Brewery Tap, although the main theme, followed the crow, with crow images adorning things throughout. Although the beer was good, the place was quite soulless, sanitized. On the way up to The Hand And Heart, the conversation turned to the old Saunders team, the football the team played, pretty much finished my Brother off, with watching Blues, it was excruciatingly boring, off the pitch, the team was quite tight knit, and their antics have become legendary. Ian, regaled us with a story about Noel Blake, who was at school with his Brother, apparently, their school, had a run in with a neighboring school, Blake scaled a 12 foot fence, to get at the pupils of that particular school, on his own, and then proceeded to wade into them. From what I remembered of Noel, I could believe it. The Hand And Heart, was a repeat visit. 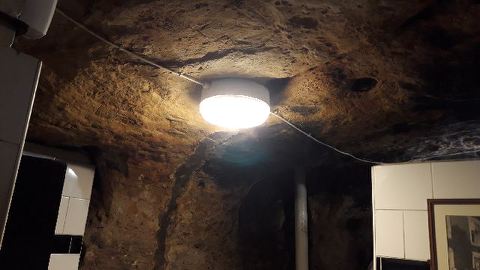 The back bit of the pub, as you can see from the photos, has been hewn from sandstone, to make the pub bigger. It was done at a time when, that sort of thing, was allowable. John came in with a mate, I hadn’t seen before, he had come up from London, but was without Carol and Jeff. Gravity took us back down the hill, and over the road, to Room With A Brew. The corresponding game, last season, was one I was in no fit state, to go to, (After Brentford) so it was a new one for me. A micro pub with a book theme, definitely a conversation point. It made me realize that I really need to read some of the classics, watching the film, is just a cop out. There was a shelf full of board games, and we had a game of Boggle, or as we renamed it, Bogle. In our version, all words, had to be football teams, (Nicknames allowed). The place was definitely worth another visit. Salutation was next, it’s still a rock pub. A place that is always on Spoons’ list, although not as into it, as much as a few of the regular ale trailers, if I’m in the mood, I’m quite partial. We holed up in the garden, and got talking to a local couple about music, and favourite gigs, we’d been to, gigs that made the hairs on the back of your neck stand up. Not surprisingly, we all had different ones. The Malt Cross was shut, so we went across the alley, to The Roebuck (Wetherspoons), shame, because The Malt Cross, is visually, my favourite pub in Nottingham. It’s been created in an old music hall, and retained a lot of the original features. According to the bouncers on the Wetherspoons, the owners, were waiting a couple of weeks, so they could pay a bill at a lower cost. After a quick half in The Roebuck, we went in The Ned Budd, a typical city centre type place with definitely no soul. To say I wasn’t impressed, is an understatement. The next place was much better, a place at the end of the old station concourse. Beer Headz was another new place for me. Great range, great beer, and ridiculously handy for the station, I could find myself in there, quite often, if I watched either Nottingham football clubs, or just going to the cricket. All grounds, on each others doorsteps.

“Anybody fancy a game of cricket”

The City ground is a strange set up. To get to the away end, takes you miles passed the home end. By the time you get to the turnstiles, you could be forgiven for thinking that you’ve walked to Meadow Lane. 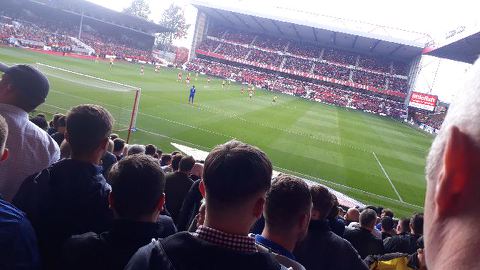 “A mishmash of a ground”

We settled much better, out of the two teams, and were playing like the home side. This was a new feeling at this ground, it’s one we’ve got a history of being rubbish at, going back to when I was a kid, and Brian Clough was deemed God. We were definitely using the ball better, and it wasn’t really a surprise when we went 1:0 up through a header from Jutkiewicz. Mikey seemed to come from nowhere, and jumped on me. I spotted the Noonans, and celebrated with them too. Because of the ridiculous kick off time, I had fallen under the misconception that it was later on in the evening, and wondered how they were getting back to Telford, until they reminded me what the actual time was, yep, I felt stupid. Halftime, and I went to see who else I could see, Badger was holding court, and then I spotted Dave Moyna. It was the first time I’d been able to catch up with him, this season. He was with Steph and Justin, but no Seeley. After a quick Hello, I headed back. The second half was very much the same as the first, we were bossing the game. I’d been saying before the game, how I didn’t rate Che Adams, so it was obvious that he would score, if we were going to get another goal, we did, he did. Had we managed to hold on to the 2 goal lead for another couple of minutes, I think we would’ve won. As it was, a good strike, cut the deficit. Monk made changes to keep the momentum going, instead of shutting up shop, it back fired. With only a couple of minutes of normal time remaining, Forrest got the equaliser. It was a poorly defended goal, with Lee Camp being the biggest culprit. The game finished 2:2, and after being 2:0 up, it was a flat feeling, but we all would’ve taken a draw, before the game, that’s what we got.

We wondered back to the station, just missing one train, so me and Ian went back to The Beer Headz, the rest must’ve left the ground early, to catch the train we missed. The train back was a stopper, and was jam packed. The Carling brigade had got their provisions for the train, and the sound of ringpulls, being snapped, filed the carriage, and the songs started, the transport police got on too. It was going to be a long trip back. The train spilled out its contents at New Street, and saying goodbye to Ian, I headed for the bus.