It’s not for me, trawling round car boot sales, or D.I.Y. stalls, or garden centres. I’m never going to waste a precious Bank Holiday, doing something that, absolutely appalls me. Even the thought of spending time with either a decorating, or gardening implement, in my hand, fills me with a dark foreboding. With a full fixture list of Non League games to pick from, I was always going to go ground hopping. After enduring a party including noisy, exited kids, on the bus, I hit town, with its Bank Holiday commuting workers. I feel a certain amount of empathy, with them, most doing jobs, that are not necessary for a Bank Holiday. I live in a city that has embraced the idea of global brands, the older I get, the more rebellious against this, I’m becoming. We are being channeled to comply, without knowing it. The reason for this rant is simple, the number of truly independent fast food outlets in the centre of town, is dwindling, complete with choice, and ultimately, quality. I managed to find one of the last surviving “Greasy spoons”, still open, and purchased a bacon and sausage sandwich on extra thick white sliced bread, like it was contraband. I caught the first of three different connections, up to Altrincham. Virgin, ran the first one to Crewe. As the service was pulling into the station, it went passed a train destined for the Elizabeth line, when it opens. I noted the pantograph on top, and the bogies underneath. I couldn’t help thinking that the swap from top to bottom electronic connection, will fail at some point. As I stood waiting for my next link to dock, a heritage excursion went through, it was some of my fellow passengers reactions, that drew my attention. One of these, is on my wish list. The next service docked, it was run by a franchise, I used to use, a lot, Arriva trains, Wales. It felt kind of strange, getting on, I was being transported through my memory, let alone towards Altrincham. Getting off at Chester, I was to embark on the longest, and potentially, most perilous.

I’ve written, (And spoken about, as it happens) about these trains. They’re not allowed to venture south of Crewe, due to safety reasons. An empty train was being driven back to the depot, only as it slowly hit the buffers, on a siding, the carriage/cab, detached from the bogie. Luckily the driver was unhurt, but these trains are still being used. The service, (Ran by Northern Rail, who else?) stopped at every station. What concerned me the most, was how slowly it went over the viaduct, at Northwich, it felt dangerous, and I’d like to think, that I’m a seasoned (Some would say old) railway commuter. Eventually, we made Altrincham, and I was quite relieved to alight. The unique, familiar sound of a Manchester tram horn, welcomed me to the North West. The Tavern On The Green, was first, and it seemed, I was its first customer of the day.

“How new and old, can live together”

The beer was well kept, and you could see that it was making a fine effort. The decor was a collision of new and old, it made it tastefully cool. I drank up, and moved on to PI, the third, in a small North West chain. A micro pub/wine bar, full of the usual nice touches.

The Old Market Tavern was next, a rough and ready rock venue, with an absolute cracking range.

“Out of reach of the axe men’s”

I got talking to the barman (It’s usually a barman, or barmaid, I end up talking to, when I’m ground hopping), he told me of the plans that the owner had got. Apparently, they were putting a substantial amount of money in, to increase the space, for when they had a band on, as well as upgrading facilities. My only question, were they keeping the range? A resounding absolutely, came back. I wished this place was closer. I went next door to the Orange Tree. I walked straight back out, it had one guest ale, and I wasn’t confident, it was going to be any good. I walked back to the market hall.

“Now THIS is a market”

I wasn’t expecting this place to be open, especially, as it was a bank holiday. I don’t know who the genius was, that had the foresight to open this place in the first place, as it is now, or whether they were the reason why it was open on a bank holiday, but I applaud them, ney, I drop on my knees in a ‘We’re not worthy’ pose. In the corner of this piece of Heaven, Jack In The Box, is situated. I stood with my pint, watching all ages and groups, eating, drinking and chatting, in a relaxed ‘European’ style, with a Northern twist. It was another place, I wished was nearer. My last port of call, was Costello’s Bar. The brewery tap for Dunham Massey. The beer was excellent, and so was the service, but it was soulless. It’s not a place you could sink in, relax, spend an afternoon. It’s a shame, because the beer and service, is indeed, excellent. It was the first time that day, I’d encountered Leeds (Sorry, Guiseley) fans. With the colours being exactly the same, they were very much interchangeable, with being a suburb of Leeds. I drank up, it was time for the real reason, why I was there.

As a Blues fan of a certain age, I have bad memories of Altrincham. I’ll leave it to you, to do the research for as to why. A few posts ago, I mentioned the demise of football programmes, not only being on the horizon, but moving closer to reality. In my late teens, programme cabins were at every ground you went to. I honestly didn’t think there was any left. In my search of a programme for that days game, I was directed to the Altrincham one. By just walking in, I shed 35 years. I can’t begin to tell you how I felt, but I could’ve done a lap of the pitch. I didn’t know whether to blub like a girl, whose perfect boyfriend, had popped the question, or laugh hysterically, whilst jumping up and down like Tigger. 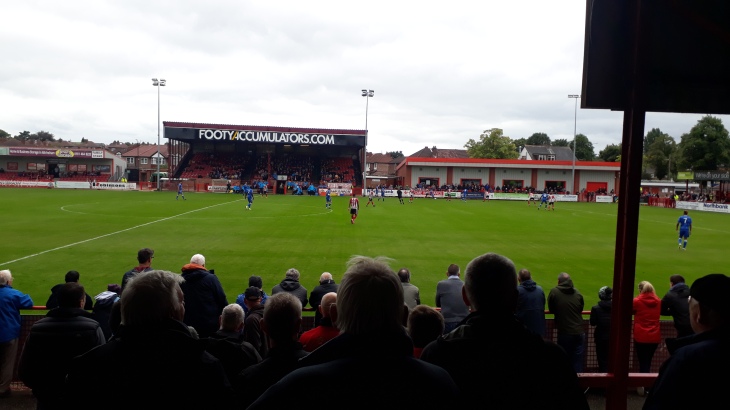 “Did this lot really beat us?”

The game wasn’t exactly great, but then, I’ve watched worse. The best two chances fell to the home side. They rightly had a goal chalked off for offside.

“This is when you know, you’re at a non league game”

I went and got a pie. Halfway between a Pukka and a steak pie, up in Scotland. I’m thinking of taking an empty suitcase up to Hearts, next time, bringing as many pies back, as I can. Halftime, 0:0, and I went back to the programme cabin. I came back out with a few gems.

“3:0 to Chorley, when the F.A.cup meant something”

Second half was a little better. Altrincham went 1:0 up with a far post header. To the delight of the Guiseley/Leeds fans, they equalised through a sweet strike from outside the box. Both teams cancelled each other out, and the game finished all square. It had been worth it, just for that programme cabin.

I was hoping to go to another micro pub after the game, called The Rustic, it was shut, it was supposed have been open, I went back to the place that wasn’t supposed to have been open, The Jack In The Box. It was a different way back home to Brum, Northern line to Stockport, and then Cross Country to Birmingham. 5 trains, and 4 different companies. Before privatisation, they used to produce a book, twice a year, that had every timetable in the country in. It was the size of the full edition of the Oxford English dictionary, or a standard sized bible. Each timetable was numbered, it wasn’t numbered by page. It’s easier to do it on the internet, but I miss those timetable books, sitting there, working routes out. At least Altrincham, has still got a programme cabin.