I hit the Wellington, half expecting, our usual table to be occupied by Jinksy at least. They were all up the other end of the bar. Paul Mason was with Jinksy and Pete. Jinksy had met up with Nat Peters at the Forrest game, and things had got messy. We were soon joined by J.K. and Taffy. One of the Norwegian brothers came in, with a friend, I hadn’t seen before. As did Steve. We’re already making plans to meet up with the Baggie ale trailers. It’s been well over 10 years since I drank round Stoke, and got picking Paul’s Stoke ale pub knowledge. We decamped to The Head of Steam, and watched the cricket. I love test cricket. You can put the 20/20 where the sun don’t shine, but test cricket is fantastic. How the weather can play a part, how a pitch can change, as it’s played on. Let alone, all the other variants. There’s no other game like it. The Lunch interval led to the channel being changed, and we headed off down to Kilda. I had a right shock in here. My name got called, and I looked round to be confronted by a lad, that I hadn’t seen, since the old Kop terracing had gone. 24 years previously, in fact. Even with the glasses and grey hair, I recognised him in an instance. I’d bumped into Brynn, last season, now I was bumping into his Brother Craig. We couldn’t help but share some of the drunken antics we’d got up to. Comparing memories and filling gaps. I followed the rest down to Dig Brew, and soon joined Brynn and Craig, reminiscing about the Cooper and Fry years. The rest left me to it, and went for a last one in the Dog, I’d spent too long talking, to race over to the Dog and then hot foot it to the ground, in time for kick off, so I took a slow walk to the ground. 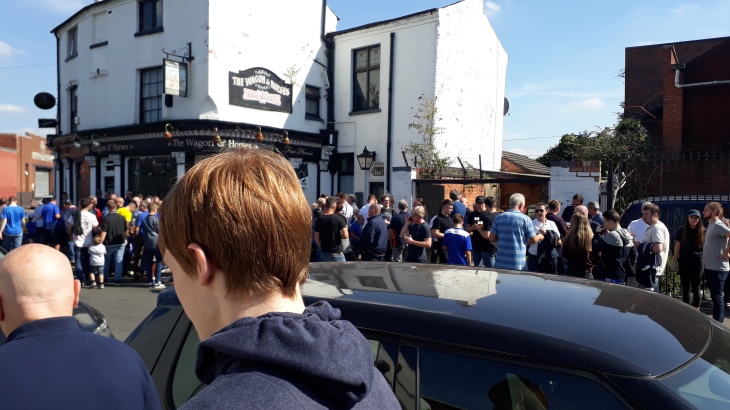 “A bit of sun bathing”

Aida caught up with me on the way to the ground, we should’ve turned back to the pub.

I went back to the Spotted Dog after, all the ale trailers were in there. I got talking to Darrell, about pubs in Stevenage. I’m doing this place, international weekend. Tron came in. It’s always good to see this legend. We all got talking about ground hopping again. I’ve spoken about how many grounds, this bloke has done before. He must keep his own personal records, and had totalled up how many grounds he’s actually done, in this country. Including Scottish, and non league, it stands at 137. That really is an amazing achievement for a football fan in this country, but like I’ve stated before, Tron is a Norwegian, still living in his home land. Readers of this rubbish, will have worked out, that I’m not Gary Rowetts biggest fan. Amongst the ale trailers at least, my disdain for his football style, and by association, him, proceeds me. Andy, a Stoke City fan, who I know from watching Warwickshire, text me. Both he, and his Brother, are having to put up with Rowett now. A few texts went back and forth between us, as I drank up, and got the bus home, I feel sorry for Andy and Chris, and probably all the other Stoke fans, but I’m glad that Rowetts failings are being exposed. (Andy and Chris, have already had enough) The sun is starting to set on him. The unofficial fan club at Blues, is thankfully, speedily dwindling, the more stories from his tenure are revealed.