I walked into town, I hadn’t got the change for the bus. The first part of the journey was New Street to Euston, it had worked out, that I missed the engineering works, that had shut Euston down for 3 consecutive weeks, a route that I’ve done many times. I touched down in London, and sped through the station, down to the underground. One thing I’ve worked out over the years, the majority of passengers on the train that you were on, all make their way down to the underground too. The quicker you can get down to the underground, the less congested it is. I took the Victoria line up to Finsbury Park, and then changed to the Overground.

After a swift platform change, I got on a Great Northern service (No, not THAT Northern), yet another franchise, another tick off for a train spotter, I suppose. We sped passed the Alexandra Palace, An impressive, imposing building, that I had only seen on the television. We were going too fast, to be able to snap a photo, but then, London gets faster, every time I go down there (Or I’m getting slower). We touched down in Stevenage, and I  headed in roughly the right direction. This was already a place, where I should’ve written down more detailed directions. I finally made it over the footbridge, that links the new town, to the old town. (Certainly not in the same league as Edinburgh, in more ways than one)

“The only thing of note”

The Standing Order, is one of two Wetherspoons outlets in Stevenage, after a bacon roll, I headed back to the new bit. The next place was the temptingly named Old Post Office. The name was the only thing of character. A Green King owned place, with televisions everywhere, showing Sky sports (The test match). I counted 7 screens in total, with England playing in the football, I’ve no doubt, it would’ve been full, come kick-off time. I headed back to the old bit of Stevenage, and breathed a sigh of relief, once I’d made it over the footbridge, getting a lottery ticket on the way, I watched a little of the test, on the phone, that the shop assistant had propped up on the counter, he’d been at game, for the first days play. Jealous? You bet I was. The next place, on my not very long list, was the strangely named, Rump and Wade. The Rump bit, I assumed, being a steak term, but Wade? That threw me at first. Anyone with a grasp of British history, will recognise the name.

Wade’s portrait, I spotted on the way to the toilet. My pint was the first out of the barrel, so the young barmaid, had to run some through, before she could pour it. Turns out, that she’s started to drink real ale. She’s obviously a novice though, because she likes Sharp’s Doombar. She smiled, as I screwed my face up, I reassured her, that given another 6 months, she’d be screwing her face up too (And still not look as ugly as me, doing it). Her tastebuds are waking up, which is never a bad thing. The next place was worth the hassle of finding it. The Dun Cow, is a nice community pub, on what seems, a nice, old estate, none of your new builds. It would definitely be a place, I would use as a local, not that I ever want to live in Stevenage. The Mat Taylor, predicted rain, had not materialised, in fact, seeing that we’re now well into September, the glorious summer we’ve had, is showing no signs of running off, just yet. I love the sun and heat, hate the cold and damp. Watching a narcissistic colleague at work, who views the forklift truck, as his own personal possession, melt, during the summer, was particularly satisfying. Chequers was the last place in the old bit, that I went to.

“This really is a Green King owned pub. Honest”

By far the best Green King place I’ve been in. I’m not used to such a range of guest ales, and commented to the licencee, who stated that the place was a flagship for the brewery. Why Stevenage, I don’t know, but I certainly wasn’t going to moan.

After savouring, a pint of coffee stout, I made my move for the ground. I wish I’d ordered a taxi, not because it was miles from where I was, but because of the sprawling maze of car parks, non descript, retail outlets, and branded restaurants. I felt that I was walking through Hell, by the time I had managed to get to Our Mutual Friend, I had broken out in hives. My good friend Darrell, had recommended this place, I was disappointed. First of all, the glasses, were plastic, bad start, secondly, most of the beer had run out. It wasn’t a big game, with a small away support, (2,282, was the total attendance) so how had the place run out of 4 different ales? Plastic glasses? Really? To say I wasn’t impressed with Stevenage, is an understatement.

It was £15 to stand on the home terracing, or £22, to sit in the away end, I took the cheap option, and wished I’d spent an extra £7 to stand up, like the rest of the Macc fans. Had it had been the same price, I would’ve definitely been in the Macclesfield end. Even with being in the home end, I wanted Macclesfield to win. 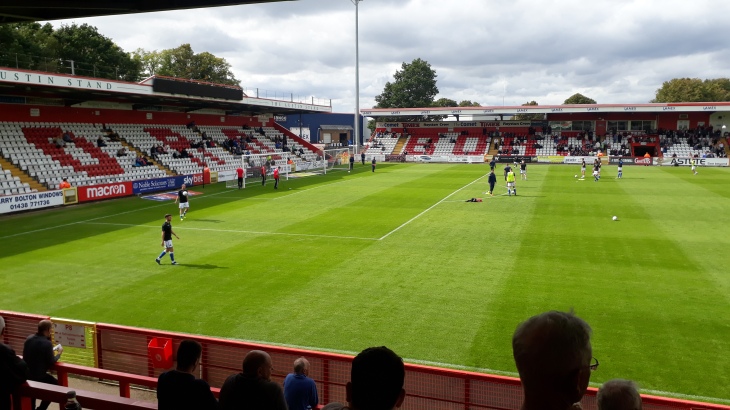 “And this huge away support, vindicates plastic glasses?”

“Or the home support?” 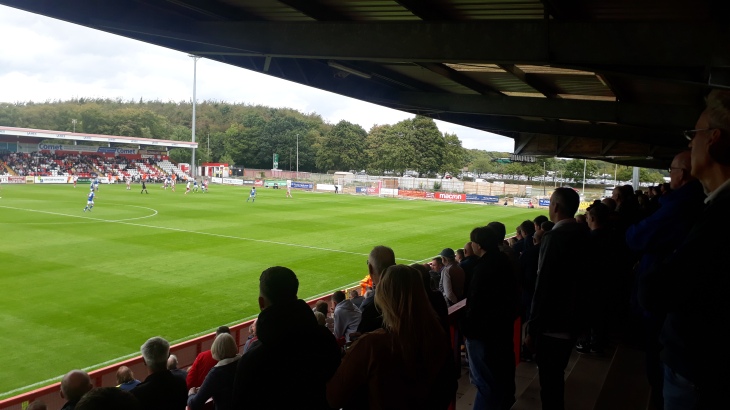 “Is there any point building the rest?”

The Silkmem, showed early promise, played some good stuff, including a sumptuous ball from right back to left wing. Stevenage managed to fight their way into the game, started to look like the team, that was in the league last season, and not, the team that had been promoted, they even hit the post. It was end to end, and then the home team went 1:0 up with a near post header. It took a bit of the stuffing out of Macc, and they went into the interval, still trailing. Second half, and Macclesfield went in search of the equaliser. They didn’t get it, and their challenge fizzled out, Stevenage, were happy with 1:0, like they were making do, it seemed to reflect the town as a whole (More like hole)

I snaked through shoppers and their vehicles, trying desperately to search for landmarks, I could remember, from before. I thankfully, made it back to the station, and got out of Stevenage, as fast as I could. There were more stops on the way back to Finsbury Park, but I didn’t care. I had enough time before my train back to Brum, for a last pint, with the Bree Louise, not being open, I went to the Royal George, instead of the Euston Tap, I walked in, to catch the final couple of overs, in the days play. After a pint of porter, and grabbing a pasty, for the train, I headed back to Brum, glad that I’d ticked Stevenage off, hoping, I wouldn’t have to ever have to go back there again.