The inuits have fifty words for snow, I don’t know why we haven’t got the same amount for rain. It was in between light rain and drizzle, make your own word up. After hitting the Welly, I was expecting Mikey, not Jinksy. He was off to the beer festival at the Inn on the Green, and then over to watch the Moors play Ebbsfleet. I met up with Mikey at New Street, and then on the way through the ticket barriers, I bumped into a lad that I used to work with, about 6 years previous. With time not on my side, it was a far too quick a catch up. Especially with him having his three kids with him. We vowed to get in touch for a better catch up, chances are with life though, it won’t happen. I have no idea how what happened next, happened, as Mikey was as clueless as me. We were joined on the platform by Badger. Whilst we were chin wagging, we conspired to somehow, be completely oblivious to the train we needed to catch, pulling in, and then pulling out, right in front of us. Badger caught his train to Cheltenham, whilst we spent the next 20 odd minutes laughing at our stupidity. We finally got on a train, and made it to Tamworth. I once worked on a market stall, one day a week, in Tamworth, but never got the chance to visit the place properly. I’ve also been through Tamworth station many times, but never got off. I had no idea, that there was a high level, and low level, the tracks cris crossing. As Mikey was at the cash point, I put my head round the door at The Phoenix, and wasn’t impressed with the Marston’s style range. We went to the Tamworth Tap. This was more like it. Especially with a friendly barmaid. 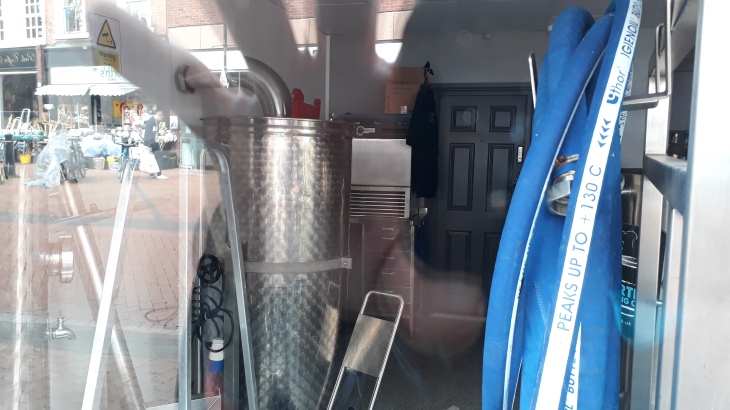 We went to the Kings Ditch next. My only gripe with this place, was it was too small. Everything else was excellent. 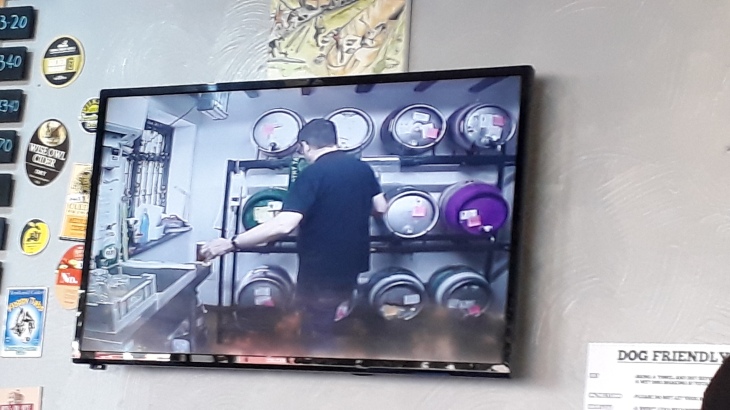 “Now THIS is reality tv”

A genius idea. Forget Sky sports, this is what entertainment should be in a pub. We were informed by a couple of Lamb’s fans that we sat next to, that it was Non league day. I’d heard of it, but to me, it was just a Saturday that Blues weren’t playing, and I was determined to watch a game. With only having 3 league grounds left to do, I’ve branched out into the non league scene more. I basically want to do as many grounds as I can. We went to the Sir Robert Peel next, and last before the game. It had two Church End beers on. I had the Coffin Stout, swilling it round, to see if I could taste Spoons’ socks. All I got, was a beautiful creamy, coffee stout. Mikey ‘Punked’ me, or to put it in the right context, ‘Trumped’ me. He got me to turn round to look at America’s hideous president, on the t.v.

Tamworth have got a 3G pitch. On the one hand, they are a good idea, and so much better than the original ones that we had to endure, cheap to run, and hard wearing. They are, however, a plastic hybrid. What happens to all that plastic, once it has to be changed? It maybe a better universal use of plastic, but it’s still plastic. Redditch weren’t looking like a side, at the bottom of the league. The Lambs weren’t looking like a side from halfway up. They still took the lead though. I was expecting some kind of capitulation, especially as Jinksy had already seen Redditch play this season, and basically, said they were awful. Sometimes, league positions lie, Redditch equalised, and were looking the much better side. We moved for a different view, with the score 1:1 at half time. 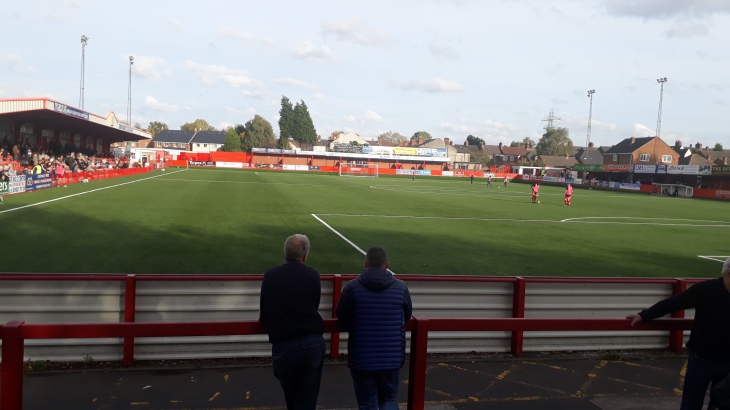 The Redditch fans that were next to us, celebrated their second goal, and nervously, kicked every ball, thereafter. I don’t know why, because Tamworth were labouring to pull it back, and Redditch just got stronger. They comfortably made it 3:1, with a good finish, and the lot next to us audibly relaxed. (It sounded like they’d been collectively holding their breath) The home fans drifted off, with the Lambs slaughtered, (Sorry, couldn’t resist it) the second from bottom club, securing a well deserved away victory, against a mid table team, who seem to have deeper problems.

We went back for another pint, and an agreement, that Jeetan Patel, deserves a stand named after him, at Edgbaston, at the Sir Robert Peel, before getting the train back to Brum, still mystified, to why, I hadn’t realised about the station and track layout. We met up with Jinksy and Badger in the, unsurprisingly, busy Pint Shop, a new place that has opened up. 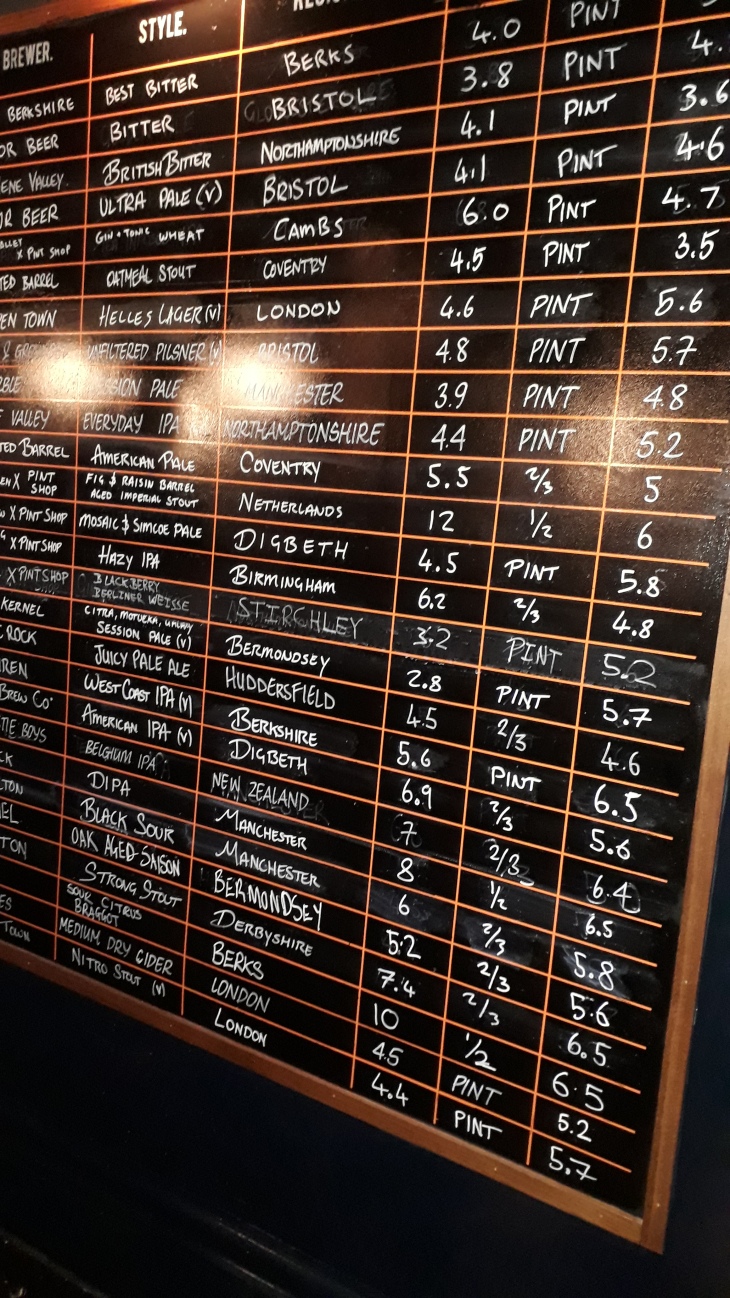 I announced that this posts title was too easy to miss out on, and up there with something that the Sun would have as a headline, much like the classic “Super Caley Go Ballistic, Celtic Are Atrocious.” Badge called it a night, leaving the three of us. With the Welly being so far away, (It’s directly next door) we decided to get a taxi, (Course we didn’t) the 17 steps, to it. (Peter Crouch, would do it in 8) It’s been announced recently, that Paul Gascoigne’s induction into the Scottish football ‘Hall Of Fame’, has been cancelled, due to concerns over his health. His health problems have been well documented, but it seems strange that this has been done. Gascoigne was a tremendous player for Rangers, and as far as I’m concerned, deserves to be in it. You don’t need to be Einstein, to know that Jinksy was in agreement. It led to a discussion on how much of an impact, the English players signed by Rangers had. Their contribution was huge, at a time, when Scottish football needed its profile raising. Gascoigne was probably the biggest, in mine and Jinksy’s eyes. It was my time to call it a night, and I caught the bus home. One of a party of teenagers, thought it a good idea, to spark up a spliff, until, all of his mates, lambasted him, for his stupidity. In protest, en masse, his friends got off, leaving him to trail behind, like a scalded child.