Rowett should have one fitted round his wallet, to stop it getting fatter. This self promoting, fraudster, is getting found out. Thanks to Mikey, I’d got a ticket for this one, only my third away game of the season. I’d also acquired a cold off a bloke at work, who has generously been passing the germ around to everyone. Whenever I start at a new job, my immune system, seems to take longer, in finding the new premises, and colds seize the opportunity to attack. I haven’t been able to plan that far ahead since getting the sack, so I hadn’t already got my train ticket, luckily for me, the fixtures haven’t been too bad. The ticket was cheaper, than what I was expecting. Darrell was his usual early self, early enough to visit the bookies, after a quick hello. When I got back, he’d been joined by Ian, and a, these days, leaner looking, Jinksy. A few posts ago, I’d written about the new trains, that were being trialled, to be used on the new Elizabeth line. In my experience, whenever a dual purpose invention gets introduced, it has initial problems, doesn’t matter, what it is. Chaos had been caused earlier in the week, when one of the trialled trains, had rippled the overhead lines down, with its pantagraph. We chatted about the fallout from it, as we waited on the concourse, before getting the train. We touched down in Stoke, with one of us, (I won’t say who, for fear of reprisals to him) still stating his opinion that the women from the place, are the ugliest in the country. As I’m no art gallery exhibit myself, I couldn’t comment in agreement, and just let him get on with it. The White Star, has been advertised, as opening at 10 o’clock, according to the cleaner, who saw us waiting outside, it wasn’t opening till 11. It was Wetherspoons voucher time. On the way, me and Ian ducked into a shop to get a lottery ticket. I spotted an Oatcake on the counter, (Not the food, but the fanzine) as these things have almost completely died out, (Much like programme cabins) I bought one. If nothing else, it helps you to confuse the local fight club. Although The Wheatsheaf, is now in the G.B.G., the beer was kept too cold, as we walked into the place, I’d noted the usual hooligan loved labels, and a little later, as we waited on our taxi, (Which thankfully appeared, in what felt, seconds) our accents had drifted over to a group of knuckle scrapers, hanging around outside the entrance. Regardless of the presence of a police van across the road, and an even nearer presence of police on foot, ‘minding’ this group, we were asked for the time, and then where we came from. In these sort of situations, there’s no point trying to hide who you are. None of us, indulge in the hooligan lifestyle, and the time seeker, could smell blood. We couldn’t get in the taxi to civilisation, any quicker when it turned up, agro averted. The Arnold Minchin, another Wetherspoons, meant voucher time again. Steve was waiting for us, we’d finally spotted Whaley. (No red and white hooped jumper) we recounted the close escape, from the previous place, as well as thinking Up, a potentially embarrassing name for Jinksy’s bank transfer to Nat Peters. The vast majority of real ale pubs, open up at 11 o’clock, we’d made use of Wetherspoons opening hours, and could now move on to the juicy stuff. Lymestone Vaults was first, with the breweries full range. Unfortunately, the Black Jack guest ale, I fancied, had turned to vinegar. Ian fell victim with the same choice, I made do with a different choice, and added a pork pie. The pie looked better than it tasted. The next place was more like it, and I encountered my first colloquial use of duck here.

“The Modfather would’ve been proud”

Wellers is a good micro pub. A place you could easily stay longer in. We moved on to The Bridge Ale House, another micro pub.

A must visit place, one that the Stoke lad a fortnight previous, had recommended. 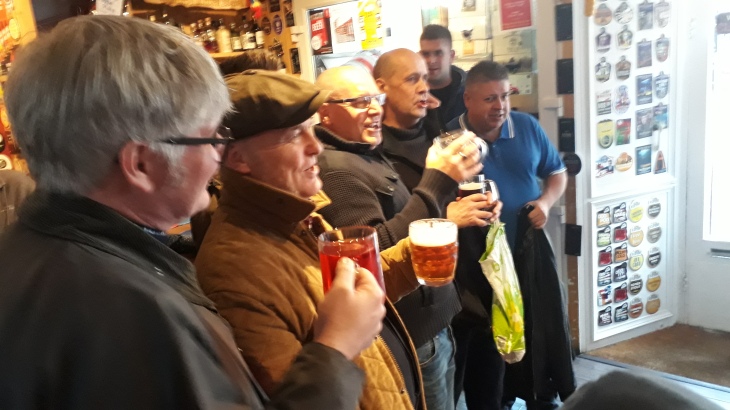 “Paul and his Ugly Crewe

After I gave Paul an update on my health, (He was one that was concerned about me, after my accident) he and his crew broke into an impromptu performance of ‘Ugliness’, changing various words to ‘Happiness’ They decided to grab a taxi, whilst we grabbed a drink at the Hop Cellar. A place that’s a bottle shop. Very much more, a continental style place. We’d timed our trail, just right to get our own taxi to the ground

Rowett hasn’t had the brains to alter his style of football. In football management, a certain system, will only get you so far. A good manager, will adjust accordingly. An arrogant one, will believe his system is the perfect one. Every other manager, and coach, (And most football savvy fans) have worked out how to play Rowetts beloved system, and now know, how to set up their own team, to beat it. (Providing they have players with a modicum of skill) Give Rowetts team the ball, and then pick them off, when they run out of Rowett attacking ideas (Long ball, long ball and long ball). His teams have strict boundaries, in which to work with. He picks subservient players, to cope with those boundaries. It only works to mid table security. Never going to be relegated, never going to get promoted. With Monk allowing Stoke the ball, the first half was pretty attritional. I went down at half time, with the score at 15 each. (Take 30 goals off that total) I was accosted by Preston Martin. We had a good rant about Rowett. We took so long about it, we heard a roar from the Blues fans. We both raced up to find, that Blues had scored. Seeing that the game was actually the reason why I was there in the first place, I decided to watch the rest. We held on fairly easily in hindsight, but then, we are talking Rowett system.

Although I’d indulged in a little singing, (Complete with a bit of Rowett baiting) the cold that I’d had passed on to me, had mischievously decided to have fun with my vocal chords, and I found myself sounding like a Brummy Marge Simpson. I wasn’t to know, until I tried answering the phone to Jinksy, after a bit of a wander, I found the White Star. The others came in, and a hungry Ian, was seduced with a pizza, off the pubs menu. A local female Jeremy Kyle guest, set her eyes on him. . . . I couldn’t help but leave him in her clutches. I walked back to the the station and got my self something to eat. I was joined by a very inebriated Darrell. He was all for carrying on when we got back to Brum, but being a good friend, I convinced him to get off home, before he got any worse. I joined Jinksy and Mikey in the P.O.V. Whenever we play Stoke, memories of the same three games always crop up. Younger viewers will go misty eyed with the 5th round cup game at the Britannia, (I have no idea what the pre sponsored name is, otherwise I would use it) then there’s the 7:0 game, (Yep, Blues scored 7) then there’s THAT game. I’m not going to bore you with the reasons for the lead up to the game, just to say that it was eagerly awaited. It was officiated by Roger Wiseman. How on earth the bloke managed to get that far up the referees ladder, I do not know. In fact, I don’t know how he graduated up from junior (Not the Scottish version) football. In all my years of watching football, before or since that game, I’ve never witnessed such an inept refereeing performance. (Nothing, even remotely close, either) Every decision he made, was opposite, to what he should have given. He was awarding Stoke things, he should’ve given Blues, and Blues things, he should’ve awarded Stoke. It got so bad, that the only way you could watch the game, was with reverse psychology. The pitch invasion was actually down to an incident involving heavy handedness from a police officer, towards a Blues supporter of primary school age, and the resulting reaction, from enraged, older supporters around It. It quickly evolved into a full scale riot, fuelled by an hour long topical news programmes worth of variants in its self. Mikey got my version of that day, and the lead up. Well a version narrated by Marge Simpson anyway. I left Mikey halfway up Corporation Street, to get our perspective transport home.