When I was a kid, and buses were pulled by horses, as a family living in Bridgnorth, we used to go on shopping trips, the favourite place seemed to be Kidderminster, once we’d moved over to Wellington in Telford, the shopping trips fell off. I still hold a fondness for the place though, and with a free weekend due to Internationals, Kiddie playing Chorley, it became an attractive fixture, I was to be joined by Dave, driving down from Chorley and Val and John, driving up from Yiewsley, the first time I’d seen them, since they’d had to put up with me after my accident. Time flies so fast when we have to fill it with things that actually aren’t important, leaving not enough time for things that are important, so I was really looking forward to it. Before I go any further, with tongue very much embedded firmly in cheek, I can’t let recent news concerning Blues fans pass, without congratulating the boys and girls who all contributed to us topping the national arrests tables for, what is now the third season running. I don’t condone violence at all, and I’m certainly not the only Blues supporter who feels the same way, I, like most, am law abiding, and have a warped sense of humour and sense of irony, so it’s with this, that I say, at least the Blues are good at something. The train took us through Blakedown, a place me and my Brother once ended up at, after catching the wrong train, after our first away trip to the Hawthorns, things worked out ok, but even now, I can’t help smiling at what happened, every time I pass through, or hear the name. I touched down at Kidderminster, and ducked into The Swan, I didn’t stop, as the range was uninspiring, Seven Stars was next, a place I’d been in before, only it’s altered since last time, again, the range wasn’t all that good, they’d got rid of all the used beer clips, that used to adorn the walls, and emphasis is now on food, I wasn’t impressed. I popped in Penny Blacks, a standard Wetherspoons outlet, I’ve become a beer snob, I settled for a half of Shepherds Neame’s Bishops Finger, nothing else appealed, and I had a little time to kill before the good places opened. The screen on my phone froze again, as I tried accessing the tinternet, it’s infuriating how manufacturing only builds things with a too short shelf life, to make you replace things, that they know, will become essential to you. It was too early to stand outside the Weavers at the Park, so I nipped in The Castle, for another quick half, after being greeted by a curious, suspicious, barking dog, the size of which, would have picked me up and tossed me round, like one of its toys, I sampled a very nice beer from Bewdley Brewery, if I had been disappointed by the previous three places, I was pleasantly surprised by how the Castle had improved, The Weavers at the Park is different gravy though, it’s excellent.

The place has the best selection of cider, you’ll find anywhere, it also has so much that catches your eye, 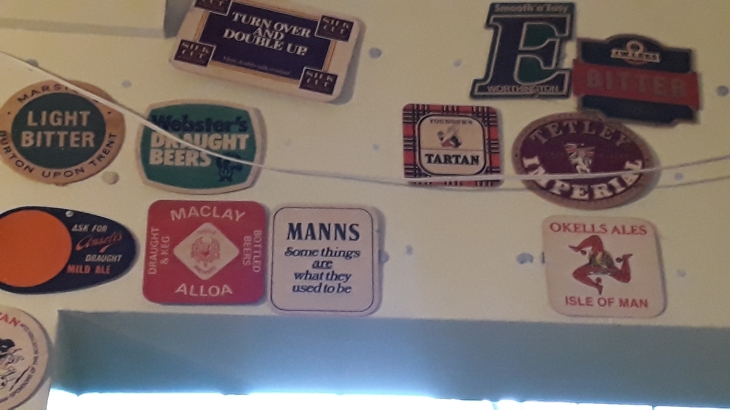 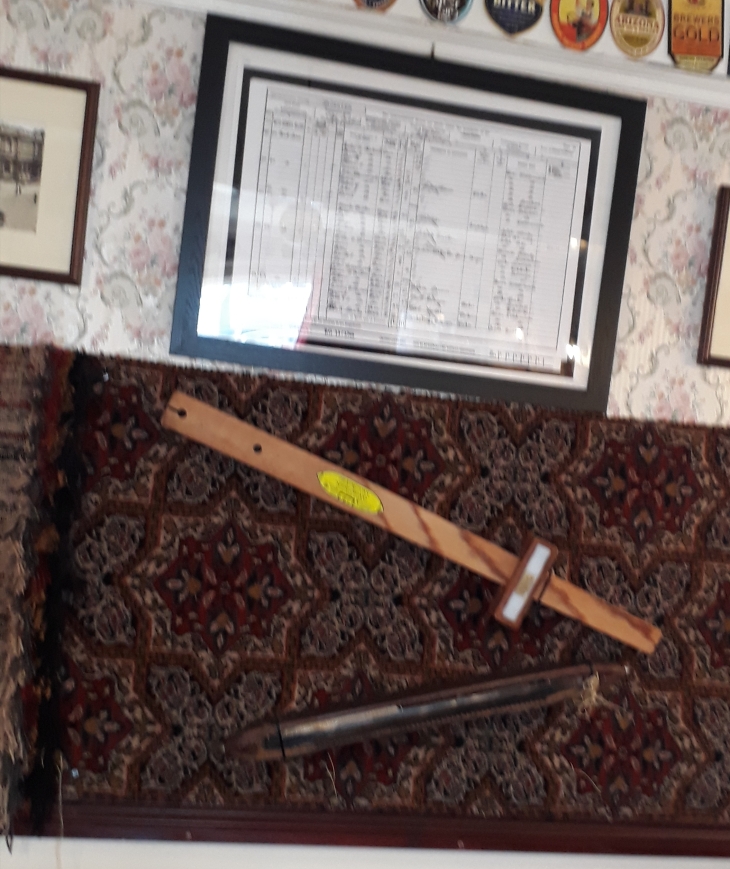 “For the workers of the day”

“With a code to live by”

I wanted to visit one more place before meeting up with Dave, so dropped in The Golden Lion, and wish I hadn’t bothered, leased off Marston’s, it still had most of the usual Marston’s range, another quick half, I answered my unfrozen phone to Dave, and I met him outside The Weavers Arms, a micro pub in a new build row of shops. The outside doesn’t reflect, what is really, a traditional type name of a pub, don’t let the look of the place from the outside, put you off going inside, not only will it not disappoint, it will delight. Dave was resplendent in his Chorley shirt, and I chucked him the programme I’d bought him, from the magnificent programme cabin at Altrincham, yet forgotten to give him the previous week. We were joined by Val and John, I’m used to meeting up for a Shrewsbury Town match, so it was strange seeing them without anything blue and Amber. John’s Niece, Rachel, has called her son, Edward James, exactly my first names, and in the same order, when I heard the poor kids predicament, I instantly felt sorry for him, cursed from birth. I’m not going to bore you with family talk, but we never stopped, we moved on to the King and Castle, a pub within the Severn Valley Railway station building, we carried on with catching up, it’s what we do as a family, when we do meet up, we never stop talking, vow to meet up more, and then life gets its hands on the calendar, and keeps flipping the months over,

Kidderminster’s ground is, like Halifax, without doubt, big enough and good enough, to be in the league. With where they’re in the National League North, and Chorley having had a bit of a blip, in what has been, a brilliant campaign, the game had the makings of a really good game, not that me and Val were actually paying much attention, we were still playing catch up, Chorley took the game by the scruff of the neck, from the start, but it took them to half way through the first half, to take a deserved lead, I expected some kind of response off Kiddie, it didn’t come, as the Mags controlled the game, as me and Val carried on catching up, Chorley doubled their lead in first half injury time, the food at Aggborough is the best food, you’ll find at a football ground, anywhere in the country, the only problem, is what to choose, as the choice is mind boggling for usual football ground fair, John had Shepherds pie, I made a mess of a roast pork bap. We went back up to our seats, Chorley hadn’t brought quite enough fans, to vindicate opening the terracing, for more catch up, and the second half, Chorley swept in a well worked third, as me and Val chatted happily, still catching up, the forth goal was due to some ‘Keystone cop’s’ defending from the Harriers, we didn’t care, it had turned out to be a wonderful game, from a Lancastrian point of view, and me and Val were still catching up, we were still catching up, when the ref signalled the end. To be honest, with being 4:0 up, the Mags had been able to relax towards the end, otherwise, they’d have scored more, such was their dominance. Jamie Vermiglio is managing a hard working side, sprinkled with enough guile and skill, to walk the National League North, I thought the bubble might’ve burst, but they blew away a side that will still be challenging at the end of the season.

I said goodbye to Val, John and Dave, and could’ve easily spent more time with them all, but they had longer journeys in opposite directions, than I did, and I fancied going back to the Weavers Arms. I text Mikey, on the train back, over getting tickets for Solihull v Blackpool, which he duly sorted out, because he’s brilliant like that. I bumped into Badge getting off the bus, he’d got his reward for completing the Post Office Vaults beer passport, with him, asking him if he’d finished Combine Harvester/Pair of Roller skates (Depending on your preference), he gave me a rendition, it’s another Badger classic.