I know I’m an absolute sucker for the 80s football casuals style, clothes wise, but I look around at what anybody under 40 is wearing, and it’s straight out of the si fi programmes and films of the 80s. I remember watching, and thanking my lucky stars, that the styles were just on celluloid, not any more though. I hit The Wellington, Steve was already in there, and so was Gary from Hereford, me and Steve had been right, we had spotted him the previous Saturday at Acocks Green. I thanked Steve for the Christmas card, as Jackie, then Paul came in. The talk was inevitably, about the equaliser at the Hawthorns, complete with a good peppering of puns involving the word hand, don’t worry, I’m not going to list them all. None of us are really bothered about the Premier league, the obscene amounts of money that fly around It, has already ruined football in this country, and we very often rant about it, Saturday was no different. J.k. came in, and mentioned Blackburn, most have decided, with the R.M.T. strike hitting Northern Rail, to head over to Southport v Moors, I’ve already got my advanced tickets to Manchester, and going to take in Salford, according to J.K., there’s a 17:10 out of Blackburn, and a 19:10, after the nightmare of Sunderland last season, I’m not chancing it. We headed to Head of Steam, where Spoons and Taffy were holed up in the corner, near the door, I mentioned to Spoons, that there hadn’t been a clip on the Gravediggers, in the Welly, it had still all gone though, *Sidenote* Spoons and Nigel at the Welly, don’t get on. Kilda was next. 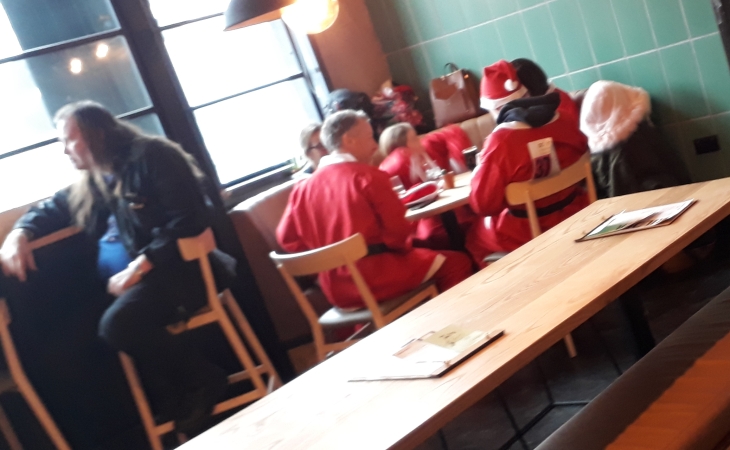 I had been sorely tempted by the peanut butter imperial stout, but at 10.5% a.b.v., and imperial stouts having a spirit taste, I wasn’t convinced on it, especially when pressed, the barman, said it had a Turkish delight taste to it, I had a strawberry sour, instead, we joined Spoons, who not only was on the peanut butter imperial stout, but gave us a taste, it was nothing like Turkish delight. Dig Brew was next, the place is definitely getting popular, Aida was in there, and I got talking to Jack, on how we moved up from drinking fizz, to the ale, I also got talking to Taffy about how my job was going, I’ve slid into it, quite seamlessly. We came out, bumping into Mikey, the time kicking on, we got the bus the last few yards, as it was slightly quicker than walking.

I could try and pad this bit out, but in all honesty, I’d struggle to. First half was rubbish, second half was rubbish, Bristol City were rubbish, but they scored, our best chance was a surging run from Maghomma, which ended up with a waved away penalty claim, oh, and the atmosphere was rubbish too. That’s it basically.

I went back to the Dog after, and after getting my Camra voting form signed, I joined the rest, including Jeff, I’d missed him, at the Preston game, I gave him a heart felt hug, and told him not to stop coming. It was really good to see him, though sadly without Carole. We all shared the latest news on Blackburn, and the alternative plans we’ve all got for it, and with how well Norwich are doing, tentative plans for there too. The ale trailers had been light on the ground, before the game, it was one of those fixtures, that wasn’t really a must go to, we were evaporating away afterwards too. As football days go, this one wasn’t going to last long in the memory. I even looked at getting something to eat in town, from one of the fast food places near to my bus stop, and through a sheer lack of enthusiasm, gave up. At least Jeff was back.