Originally, I was going to go to Livingston v Hearts, the game was moved to the Friday by B.T., and it meant stretching the finances too much, so I fell back to doing Blackburn v Blues, got my match ticket, train tickets, splitting at Manchester, as Blackburn’s utter rubbish for real ale, then the R.M.T. in their dispute with Northern Rail, called industrial action for the same day. Although I firmly support the strike action, after having a nightmare with Sunderland away, last season, I wasn’t confident that the same scenario, wasn’t going to repeat itself with Blackburn, so I chose Salford v Gateshead in the F.A.Trophy. I met Badger on the bus into town, swapping plans for the day. He was to catch the 7:30ish train up to Manchester, I got my advanced tickets for Norwich and Colchester, now that Sky had seen fit to move the Norwich game to the Friday, and met up with J.K. He was attempting Blackburn, as was Spoons, who turned up with Jude, who definitely wasn’t going to be. We swapped the latest news on trains and times, nothing that was said convinced me, that I hadn’t made the right decision to bail on Blackburn. Steve turned up, another that had decided to give uncertainty a miss. I woke up on Friday afternoon, to a text off Darrell, to say that the Norwich game had been moved, and that he’d already booked his hotel room, apparently, he’d booked it 10 minutes after the news of the game had been officially announced, typical of our Darrell. Me and Steve left Spoons and J.K. to their adventure, and caught the Liverpool train, chatting about Steve’s holiday to Krakow, I left him at Crewe, he was on his way to Southport v Moors. Someone had left the freezer door open overnight, as it was biting cold, and I was happy to get on the Manchester train. Someone had obviously done the same thing in Manc, as it was just as cold. Manchester’s changed a bit since my second visit, I can’t really remember my first, but then I’m thinking that about a lot of places these days, (Aren’t the policemen looking younger?) I was going to have a pint and breakfast, with City playing Everton in the early kick-off, it wasn’t really viable, and it was just nice to have a pint in The Piccadilly Bar, in a glass that wasn’t made of plastic, mainly full of City, there was a sprinkling of Everton in there. I went down to Victoria to get my ticket to Salford. 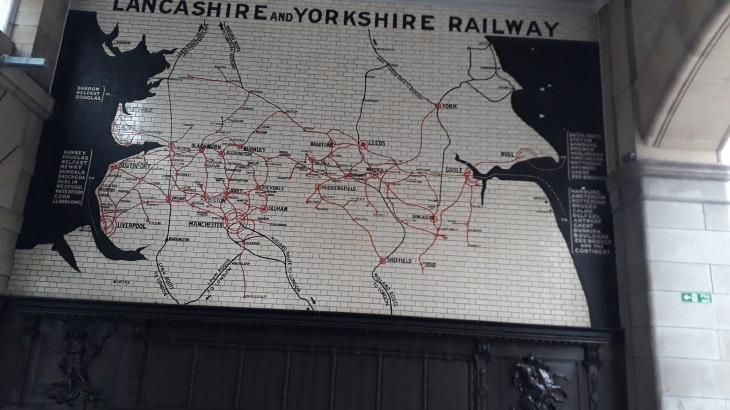 Just after I’d bought my ticket, I received a text from Jude, J.k. had text her, to text me, that the Salford game had been postponed, frozen pitch. After cussing, I wondered why Gary Neville couldn’t have thawed it out with the hot air he spouts, but ascertained that, he would’ve turned it into a dessert. Badger rang me and I met up with him in the bookies, as I contemplated my next move, we went in my favourite pub in Manchester, The Grey Horse, A Hyde’s pub, a dot of a place, but just the friendliest. Badger had a hot cider, I went to the toilet, and produced some warm Carling. Both Oldham and Rochdale were at home, out of the two, I fancied hearing the Stone Roses over the tanoy again, but after reading they were after volunteers to work on getting the game on, and seeing that Altrincham were at home to Stockport, a return visit to that programme cabin, became attractive. I left Badge to his cider and caught the tram to Altrincham. I revisited the Tavern on the Green first, a comfy place, before taking in The Rustic.

“A sheep in Wolf’s clothing”

The place was shut last time, so I was looking forward to doing it, I was disappointed, it wasn’t really my kind of thing, very similar to the Wolf in Brum, but not the same feel, a place you’d take a lunch date.

Jack in the Box, is the kind of place, different to the Bob Inn, in Chorley, but like Bob, somewhere that you can have that not so sneaky pint, whilst out shopping. Most of the last visit, was still pretty fresh in the memory, the pub re-visits, weren’t causing my hopeless sense of direction, too much consternation, I went in Costello’s, thankfully, there was no Abbott’s, I missed out on the stout though, as it had gone, just as I got to the bar. I usually don’t turn up at a ground, until the players are lining up for kick-off, I was going to make an exception.

After my first trip in the programme cabin, I settled down to shiver through the first half, though I missed what turned out to be the only goal of the game, and scored by Stockport, as I was producing more Carling. Hunger got the better of me, and I had a Wrights steak and kidney pie, before returning to the cabin. I could spend weeks, months in there, if like me, and you have a football geek inside you, then take a visit, I won’t say make sure you buy something, because you won’t be able to stop yourself, I couldn’t. I spent the second half, after using the home support, that had moved round, as a shield against the freezing wind, still shivering. Conditions not making for all that good a game, there were moments of good football, but no end product. The goal I missed, was to prove the difference.

I warmed up, on the tram back into town, getting off at a different stop, but amazingly, not getting lost. Marble Arch, was my first port of call, a beautiful place, with a tiled floor, that slopes down to the bar, I would’ve taken a photo, but it wouldn’t have shown up. I got talking to an old City fan that had come down from Scotland, a couple of decades previous, along with a couple of United lads, we had a good natter about football rivalries, and knowing that a certain friend of mine, will want to know, the City lad is a big Rangers fan too. I bid farewell, and went to The Angel, my second favourite pub in Manchester, another place that’s ridiculously friendly. I had just enough time for a quick half in The Piccadilly Tap, a place with good beer, both cask and key keg, (None of the mainstream fizz) a place that is handily located for the station. I snuggled up on the train, it had been a good day, but certainly not what I had had planned.