Sometimes you wake up on a morning of a match day, with an overwhelming feeling that it’s going to be a good day, both in terms of having a cracking day out, but also the result, I’d woken up with that feeling. I did the usual stuff, bus, lottery, bookies, and spotted Spoons and the rest, in amongst a busier than usual concourse. Jude was on her way to Worcester for a leisurely day out with a couple of friends. Most of the inhabitants of the concourse were catching the same train, a train whose passengers were bemused at seeing it fill up, the same surprised expressions adorning faces of everyone that got on at every stop between Brum and Wigan, where about two-thirds got off. We avoided the Wetherspoons like the plague, we’d all done our research on opening tìmes, and the idea was to keep away from the Carling Brigade as always, one of which, had already been astonished by our refusal of a free bottle of Stella, on the train going up. The bottle shop that we were hoping to start with, unfortunately, wasn’t extending the ‘drink in’ option. Probably a good decision, but meant a change to the plan. We dived in the Royal Oak, expecting to be the first ones in there, we weren’t, we were nowhere near in fact.

As the pub filled up with more and more Blues fans, we migrated to the garden, where Steve gave me the Cracovia shirt, he’d managed to procure for me, on his recent trip. One of those seaside comedy cartoon boards where you stick your fizz-oggs in the cut out holes, to have a photo taken, had been placed in the garden for idiots to have fun with, there’s now a photo of me and Jinksy floating round cyberspace. We moved on to The Raven before the next train from Brum had unloaded its human cargo, had we been a minute later, we wouldn’t have been able to see the bar, let alone get to it. The day had all the ingredients, to turn messy. I got talking to Paul and Son Ben, as the rest filtered out, to the next venue of choice, I tend to do much too much talking, and not enough supping, and end up trailing the trailers, the day was turning into one of those, we moved on to The Tap and Barrel, a place that if you didn’t know was there, wouldn’t know was there, yet another quirky little micro pub, Nick and Colin found it ok, but were obviously relieved to see us, again, I spent far too much time talking, and not enough time supping, the rest went off to The John Bull Chophouse. Although Blues didn’t play Wigan last season, it’s a place that had already made an impression on me, and a small place, it may be, but I know it quite well, so wasn’t going to do the usual trick, and get lost trying to find the place, all the rest were already in there, as I got to the bar, a Black Sabbath track filled the air, I turned to see that Spoons had commandeered the jukebox, track followed track of classic heavy rock. The Chophouse is an old boozer, in an even older building, haunted or just oddly shaped, and built without the aid of a spirit level, I don’t know, but an empty glass decided to throw itself on the floor next to us, a mirth filled barman cleared it up, it was an obvious, regular occurrence, we claimed Spoons choice of tracks. The rest went off to The Anvil, I wanted to take in The Doc’s Symposium, as it had been shut the last time I’d visited Wigan, as it had been a midweek game. Paul and the ugly crew were in there, after a swift half, and a swapped review of where we’d been, I took a couple of photos, on the way to Wigan Central. 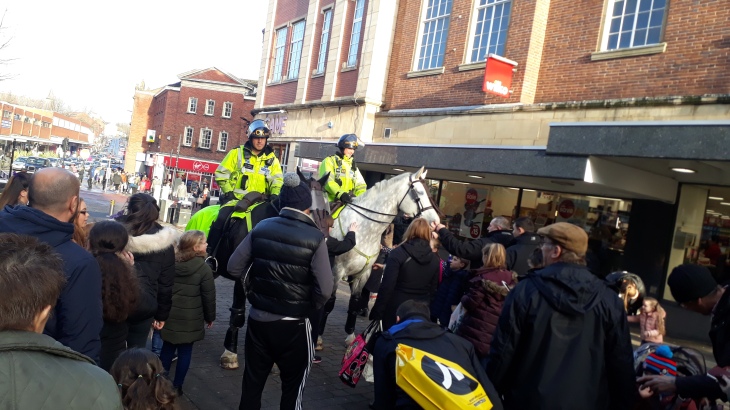 They were all in Wigan Central, one of my favourite micro pubs, the railway theme, is a must for any rail enthusiast, and probably just any rail traveller, in advancing years like myself. 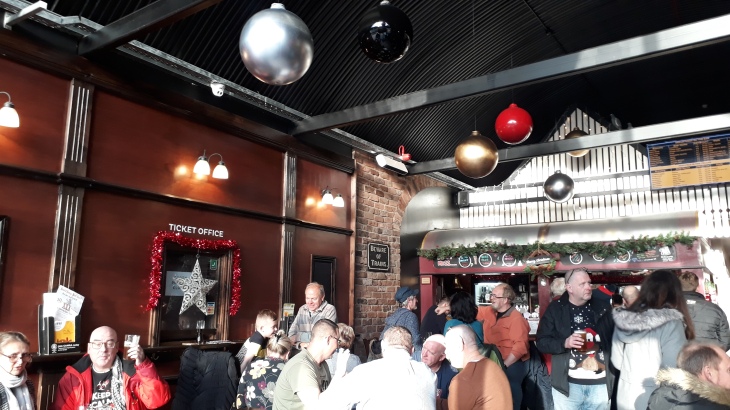 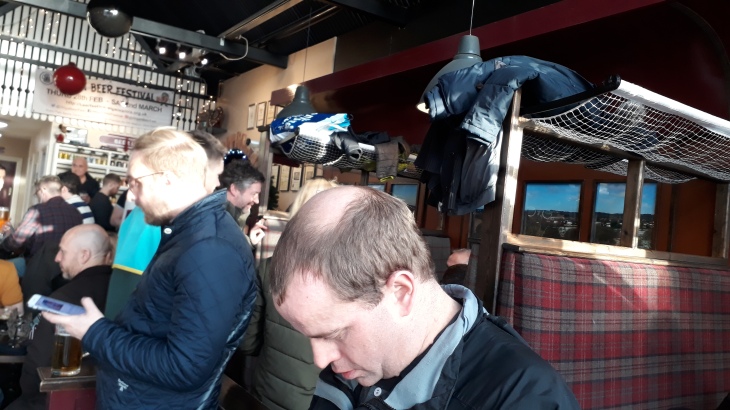 I walked to the ground with Darrell and Spoons, Darrell stopped to take a photo of the famous Wigan Pier, I almost did myself, but in all honesty, I would’ve rather have been there at the time, we don’t seem to have sub cultures anymore, social media has put paid to it, cut and paste was something you did with a fanzine, not a click of a cursor.

We started slow, a good jinking run by their left winger, needing to be defended, the home crowd and its drummer, making a bit of a racket, though you could tell that they knew they couldn’t compete with the massed ranks of Blues fans that, for whatever strange reason, had decided to make this, a must go to game, we had a chance through the middle, duly dispatched by Adams, the confident mood I’d woken up with, was satisfied with itself, the goal settled us down, and fixed a silencer to the drum in the home end. Without too many scares, we were gifted a corner in injury time at the end of the first half, that no one seemed to be in a hurry to take, it might’ve been a cunning plan, as Wigan had switched off, by the time the corner was eventually swung over, and they didn’t bother marking Morrison, who swept the ball in, a 1:0 Halftime lead, morphing into a 2:0 Halftime lead. I went downstairs to see who I could see, and caught up with Badge, someone asking for a selfie with the superstar, as I spoke to him, I spotted Brynn, Son of Brynn, and Birdy, recalling the pubs we’d been in, before the game, age now getting the better of Birdy, a fleece and jumper, covering his trademark polo shirt. We headed back upstairs for a second half  that was more or less, an after lunch snooze, Wigan toiled, we always looked like we could step up a couple of gears, if we needed to, one good move, resulting in Mags twisting backwards to get his head on the third goal. I’ve got my own ideas, as to why both Morrison and Maghomma are both performing again, but performing, they are. They’re not just going through the motions anymore, a comfortable 3:0 victory, only blighted by a booking to Craig Gardner, five seconds, (Yes, that does read, five seconds) after he’d come on as sub.

I made my way back into town,  with the intentions of taking in a couple more pubs, but lagging, I found a cafe, and grabbed myself something to eat, a ham and cheese barm cake, (Bap, roll, . . . Insert your own colloquial name, for what is exactly the same thing) feeling better, I went back to Wigan Central. Brynn, Son of Brynn, and Birdy were already in there. Birdy’s chiselled good looks might have a fair few more lines added these days, but back in the 90s, one of his hobbies, amongst Blues, and skiing holidays, was chatting up barmaids, not the ones who fawned over him, but the ones who played hard to get, the harder they played, the harder he chased, he thawed out, total ice queens, but once he’d turned them into a puddle, he lost interest, and moved on, he brought some gorgeous girls down the Blues with him, from time to time, but it was a rarity to see them twice. I timed it just right, to get the train back to Brum.

I caught up with Steph, Just, Seeley and Dave on the train, Seeley being as good as gold, something I can’t say about Mr Moyna, who let it out, that he’d had a smooch with a woman he works with, on the works ‘do’, “Nothing wrong in that”, I hear you cry, there is, if the woman in question, is married. I know I haven’t got the best of pasts, in fact, it’s a down right terrible one, when it comes to the opposite sex, but tut tut David, tut tut tut. I hit the Post Office Vaults, When I got back, Mikey and Darrell, were already in there, Jinksy and Badge joining us, off the next train, Ian slightly behind, we were all joined by Andy ‘Poo pants’ and his new girlfriend, who I’ve shamefully forgotten the name of, strange that I never forget Andy’s nickname though, he’s living in Hemel Hempstead these days, so it was great seeing him, and also looking a lot happier too. Once they’d gone, Badge went, and so did Darrell, Jinksy and Ian got talking about the mechanics of politics, but not philosophy, me and Mikey, interjecting, every now and then, before Jinksy and Ian left, as did me and Mikey. That feeling I had woken up with, had been well and truly vindicated, it had been one Hell of a good day.