It’s been a long while since going straight to an away game after coming off a night shift, and never actually from Brum. When I say straight from, I mean no proper sleep, I’d be going in the region of 34 hours without sleep. You could probably say that it’s extreme football watching, similar to any kind of extreme sport, adrenaline pushes you to see what you can do. I like to think of myself, as slightly more sensible these days, and did actually have plans to grab sleep on the train down to London, I cat napped for roughly 20 minutes. Because of that, and not trusting myself not to nod off on the Tube between Baker Street and Liverpool Street, I stood all the way. Once at Liverpool Street, the rest of the day, wouldn’t be too bad. I met up with Darrell as planned, in Hamilton Hall, the Wetherspoons at the station. After a pint, and L.J. texting me, on the hunt for a ticket for the Villa home game, I got something to eat on the train. All London stations are pretty much identity kit, when it comes to food outlets, and I purchased a pasty, something I usually have on a train home. Steve wandered up from the next carriage to say hello, as we travelled to Norwich, before re-joining Spoons and J.K., touching down, we all parted, they were in the Premier Inn, and could check in, 2 o’clock, I had about 40 minutes before I could, so made use of it, by going to the Jubilee, a nice little back street pub, not too far from the guest house, I was in. Checking in at the Abbey Guest House, I was asked if I had an allergies concerning breakfast, ‘Only sprouts’ was my answer. After dumping my gear, I text Steve for location,

teaming up with them in the Artichoke, all except Spoons who’d tentative designs on a trip on a heritage diesel loco, it wasn’t to be, and we intercepted him, going passed, Darrell updated me on the Villa tickets, offering to order one on his phone, pressing £30 in his hand, I took him up on the offer. I really should drag myself into the third millennium, but I’m far too reluctant to leave the second. We hit the trail to the Duke of Wellington, or just the Duke to Spoons, as he just will not acknowledge anything to do with Nigel, from the Welly. After the Duke we went round the corner to The Lord Roseberry, and although they’ve kept a lot of the original features, ripped it open plan in keeping with modern taste, somehow it had kept a calming ambiance, it felt comfortable. Although Lord Roseberry was nagging at me, it was only once he’d been googled, that the penny dropped, there was a Hearts connection. Whalebone was next, not the one in Hull, one a short walk away, then The Fat Cat Brewery Tap. I was truly disappointed with this place, 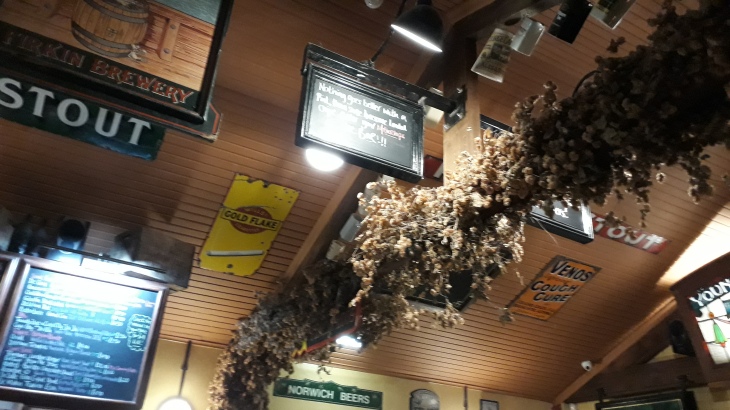 “Not because of decor”

“Not the extensive range”

No, what disappointed me, was that I was too early to sample a mint chocolate stout that was going to be available soon. I wondered if I could just camp out in there, whilst I waited. I’d been in the original Fat Cat, but not the Brewery Tap, both are an ale trailers dream. We upped and moved on to the Leopard, real ale pubs come thick and fast in Norwich,

Plasterers was next, a pub I’d actually already been in, when I was just starting out on ale trailing.

“All Ian’s kids, in the bottom photo, well they looked like him”

You could easily do a four day ale trail, do nine pubs per day, and never visit the same one twice, Norwich is that good. Coupled with the Second hand record and book shops, vintage clothes and toy stalls, that make your head spin round, when go passed, the place is excellent. We took in The Ribs Of Beef, and this was where I hit a wall, I needed food, so did Darrell, so we left the other three  and went in search of something that tickled the tastebuds, a pizza swayed Darrell, I fancied a Cheese and bacon wrap. I felt my energy levels get boosted as soon as I’d polished it off, I was up and running again, enough to join Spoons who had caught us up, on the way to the Coach and Horses. Spoons spotted Jeff and John, when we got in there, no doubt Carol would’ve been with them, had she still been with us, but it was just brilliant seeing Jeff at an away game, and both me and Spoons each hugged him. I know it’ll sound clichèd, but Blues is like an extended family, we look after each other. I’m sure other clubs supporters are similar, I just know it’s what Blues do.

I met up with Rob, Leo and Dave in the ground, and decided to stand with them, Steph had told me at the Boro game, that Dave’s Dad had died, and it was my first chance to give him my condolences. I only met his Dad once, but he came across as a good bloke. Norwich are oozing the confidence, their season has given them, they are playing on the front foot, their pressing game swamps you, 1:0, our equalizer was as surprising it was instantaneous, Adams is running red hot at the moment, his finish reflecting the conference Norwich were expressing, Norfolk’s finest just carried on doing what they’ve become rather good at, and they took the lead again, quickly followed by a third, by half-time, they were out of sight, we’d been methodically destroyed, and although being a Bluenose made for painful watching, it was vastly less painful than watching a mind numbingly boring Middlesbrough beat us. I’ve been watching us for almost 40 years, come April, it actually will be, in that time, I’ve had the pleasure, and at times, endured watching a number of goalkeepers, I’ve seen better than Camp, but seen worse, Leo on the other hand, hasn’t seen worse, and has taken a dislike to him, that’s probably an understatement, he hates him with a passion, even applauding when the lamented Mr Camp catches the ball. I gave up trying to play Devils advocate. I am similar with the Gardner boys though, Gary being replaced by Craig, but with no difference in their wasteful play. Gary’s early good performances, evaporating like morning dew.

“Switch those lights off, I’m trying to get to sleep”

I had spotted an Indian takeaway just up from my digs earlier, eating half when I got in my room, leaving the rest as my eyelids were getting heavier by the second, and I had visions of falling asleep in it.