Ordinarily I would’ve been watching Blues. After all, they were away, I prefer away games, however, it was Q.P.R., an awful ground, with awful stewarding and even more awful policing. It doesn’t make for comfortable watching. There are certain places I’m done with going to for differing reasons, for instance, Blackburn, because of a lack of Real ale pubs, Q.P.R., because of the stated reasons as to why I don’t like the place. There’s a few clubs fixtures that I’ll check on for a viable alternative, one of those clubs, is Solihull Moors. Under a previous guise, Ebbsfleet were called Gravesend and Northfleet, Gravesend residing in a part of the country, I hadn’t visited much, though the place names had been intrinsically woven into the works of Charles Dickens, and who isn’t familiar with his work? I’m not alone in my dislike of a trip to Q.P.R., and wasn’t going to be alone on a ground hopping trip to Gravesend either. After getting my advanced train tickets for Hull away, I met up with Spoons and Jinksy, the conversation easily flowing between us, making for a quick and enjoyable ride down to Euston, disembarking, we walked to St Pancras, to the Barrel Vaults Wetherspoons, to meet up with Steve. Whether you like them or not, Wetherspoons is firmly established in the fabric of the country now and whether you like them or not, there’s a market for them, and Tim Martin who was vocally pro brexit even before the announcement of a referendum, has grown the chain up. It’s formulated, and not everyone of them is good, but they have their place, for us ale trailers, they make for a good start to the day, you know they open early, do real ale, and they’re cheap. Like not shying away from his views, Martin doesn’t take a back seat either, he’ll drop in unannounced absolutely anywhere, on one of his places, to check on standards. You can be as disparaging as much as you want, but the formula works extremely well. We got the train the last leg to Gravesend. Like a lot of places in the four corners of the country, Gravesend looks tired, I like browsing round charity shops, and there’s enough of them to choose from, in these tired towns. The first pub, The Three Daws, although advertised as opening at 11 o’clock, wasn’t, and with the others on our list not opening till 12, we headed to the one option you can rely on, The Robert Pocock Wetherspoons. Barnsley were playing at Gillingham, and there was a fair smattering of them in Gravesend, after a pint, we started on Steve’s itinerary, we first ventured into the Compass Ale House, a micro pub of the waiter variety. I’ve been to several of these continental style set ups now, and am still undecided as to whether I like them.

“Talk about trying your patience”

One thing I did like about this place, was it’s no mobile phones policy, even though the stress head of the family, had decided that this would be the time to text me. 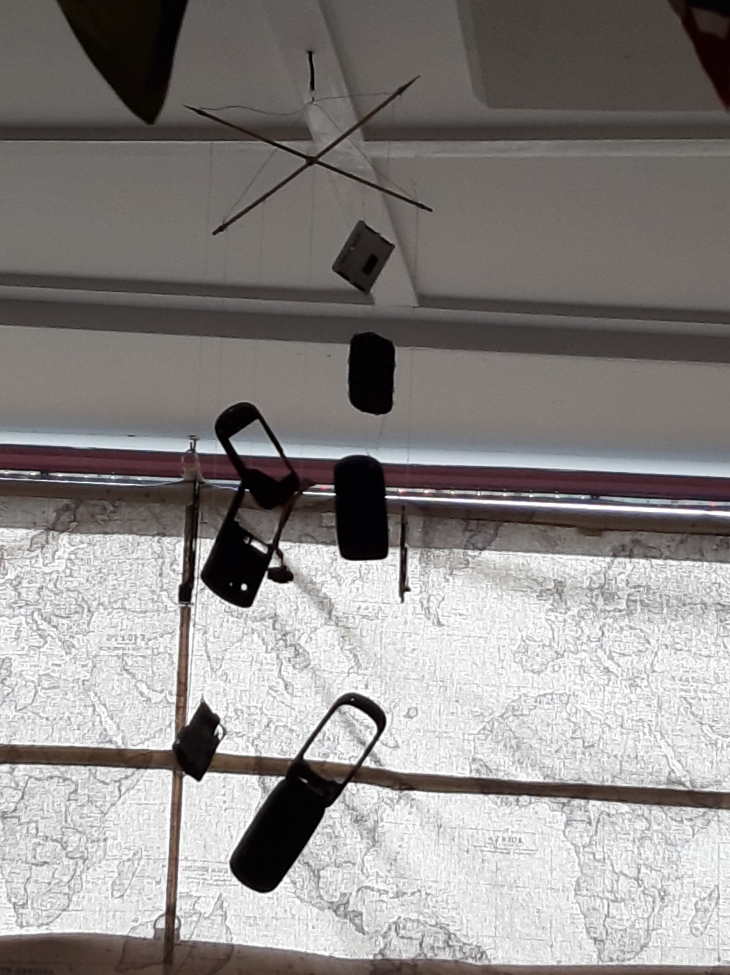 “Anybody got any superglue?”

Invictus was next, a mix of cask, key keg but thankfully, no Carling. Our accents had been noticed and after a quick conversation with a local, confirmed that the directions that Steve had got to the next place, were correct. 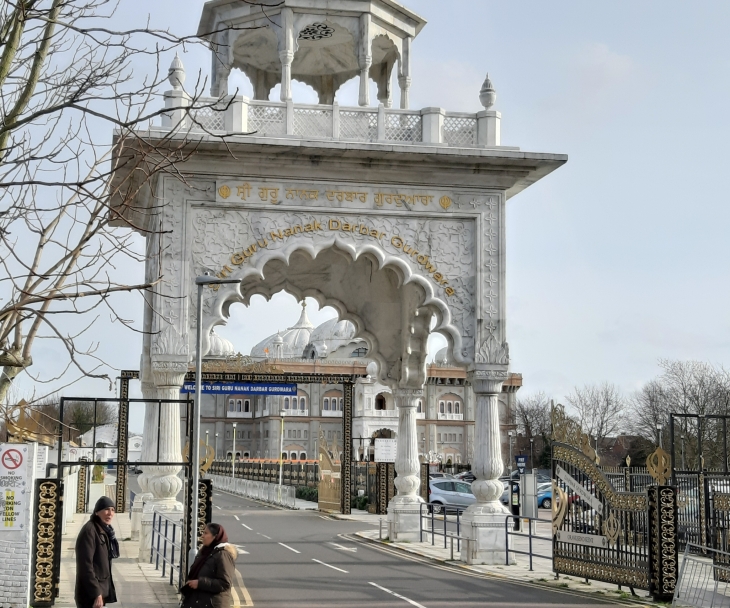 “Sikh and ye shall find”

The Jolly Brayman was close to the place in the photo, the photo doesn’t do it justice. A huge, spectacular temple. I’m not religious, don’t see the point, but I’d be lying if I said that I wasn’t impressed with the place. The Jolly Brayman was much more your traditional pub, built when people were a lot shorter, even I felt tall. I was pleased to see that they’d got Skinner’s Betty Stoggs on, I wasn’t pleased to see that it had turned to vinegar. A lot of the time, For an inexplicable reason, the best place seems to fall last. The Three Pillars is a subterranean bar residing underneath the Masonic hall, we refrained from rolling up a trouser leg, ready for the secret handshake, and took to the steps down. This place felt comfortable, the beer choice, varied and well kept.

We could’ve stayed in here till closing time, which probably explains why we ended up missing the train back to Ebbsfleet International, and grabbed a passing taxi, well not so much passing, as it was inching along in the traffic jam outside the station.

First thing that I was instantly happy with, was that we could pay cash at any and every turnstile. I was able to get a programme, and a good one it was too. I was even able to get bacon on my burger, surely the clubhouse would only have Carling.

“Beauty and the beast, the stands that is, not Spoons and Jinksy”

Solihull are having an amazing season, and it was easy to see why, Tim Flowers has got them well organised and playing well. It’s also no wonder that there was a smattering of familiar faces, Blues lads and ladies who were watching the Moors, and following what was happening at Loftus road. Whilst the Moors looked to be walking to a routine victory, Blues were making hay in west London, 1, 2, 3, 4:0 A first half hat trick for Che Adams, before Q.P.R. pulled one back, as for the Moors, it would just be a matter of time till they opened the scoring. Half time, we had a look in the clubhouse, they’d got real ale on. A pint of Bath Ales Gem, made its way into my mit, as I looked at the latest scores on one of the many TV screens. Even the bad connection meaning that the screens kept flickering, didn’t pour cold water on my contented mood. True, it was just my luck, that Blues would choose a game that I purposefully wasn’t going to, to go goal crazy, but at least they were winning, by the time I went back to watch the game, the Moors had taken the lead, Q.P.R. were fighting back too. A comfortable second half, exploded in added time, when both teams squared up to each other, once the dust started to settle, the referee reduced the numbers down to ten each, Q.P.R. had got the bit between their teeth, pulling the game in London back to touching distance, the remaining players in our game were struggling with keeping their tempers, and losing, the teams taking it turns to have their numbers reduced even further to single figures, Q.P.R. got an added time penalty, what surprised the Blues fans amongst us, wasn’t that we’d squandered a four goal lead, it was that our keeper saved the penalty, Blues had won, Moors had won, happy days. There’s an extremely good chance, that Solihull Moors could secure automatic promotion to the football league, in terms of infrastructure, they’re light years away, they make Forest Green look positively huge, but football only really takes notice of results, not size. There’s part of me that applauds how well they’ve done, and are doing, but the other part of me feels that because of facilities, or lack of, they shouldn’t be anywhere near the league. It’s not down to me though, and I couldn’t help financially, even if I did feel so inclined.

Regrouping outside the ground, we headed for a pub Spoons knew about, The George and Dragon, it used to house the Caveman Brewery, which is what had appealed to him, it had moved on, though the pub was still there. The rugby was on when we got in, and I pointed out a local in a retro Umbro Rangers tracky top to Jinksy, who inevitably got talking with. After a pint, we got a taxi back to Ebbsfleet International station, retracing our way back to Euston, we parted here, I fancied a quick half at the Tap, before getting a pasty for the train, where I bumped into Andy from the old Forge mob, when Maureen had got it. I usually only ever see him in the ground at an away game these days, so it was really good catching up, although he did say that the usual opressiveness you get from stewards and police, wasn’t in the slightest bit, evident, that didn’t help with the sightlines being still rubbish mind. Even with Blues winning, I still wasn’t overly bothered, that I’d decided to go to Gravesend to watch the Moors, I’d still had a good day, and I’d done yet another ground.