I pencilled this one in, as soon as the fixtures came out, I might have a Blues season ticket, and will get one as long as I have the money to do so, but except for a few fixtures, I don’t mind missing a home game. In the three seasons I’ve actually managed to see Hearts, I’ve grown to love a trip up to Edinburgh, watching the boys in maroon, just adds to it. St Mirren, a club I’ve never seen before v Blackburn again at home, wasn’t much of a contest. The train ride up, was enjoyable, gawping out of the window at fantastic scenery, in between reading a fanzine style football mag called ‘Late Tackle’, meant that the 4 and a bit hours, sped by quicker than you’d think. I got off at Haymarket, went and picked my ticket for the game up, having a browse round the club shop, once I’d done so, wishing I’d had extra money to buy something, consoling myself, that I wasn’t going to be one of those ‘one game a season tourists’, who clutches a plastic bag full of souvenirs, in the pub. Kay’s Bar, was a change from the Roseburn, I’m still in the discovering Edinburgh stage, it’s in the undiscovered bit of Edinburgh that tourists don’t tend to venture, it’s a haven for locals to relax without being inundated. 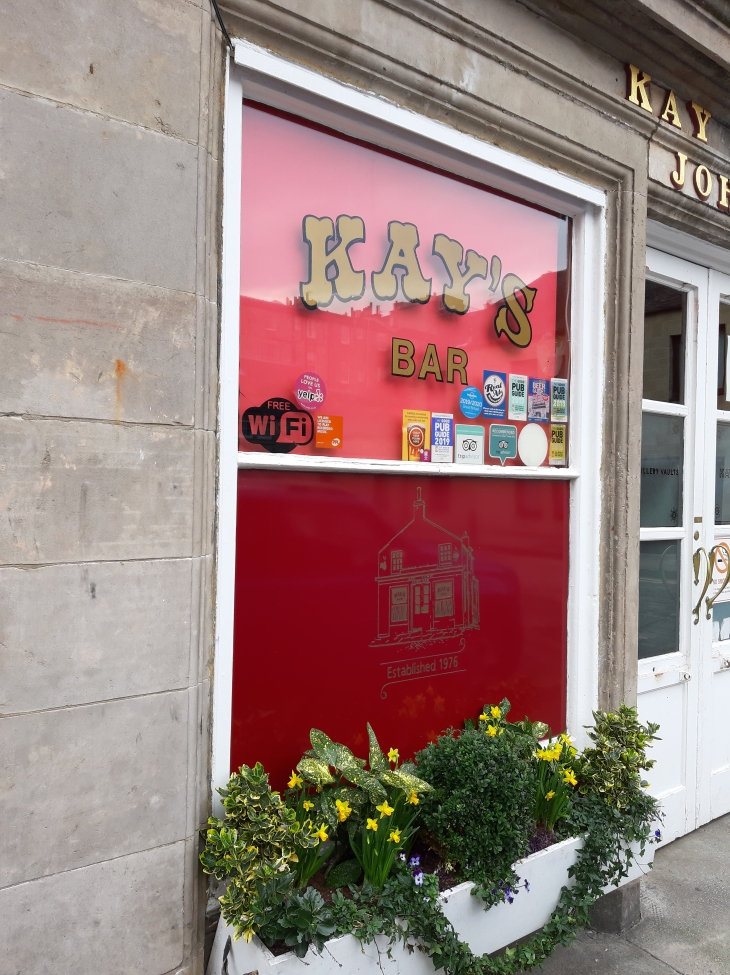 The sight of my ex Sister in law’s name, would send shivers down my brothers spine. It’s actually named after John Kay, who brewed and distilled on the premises. 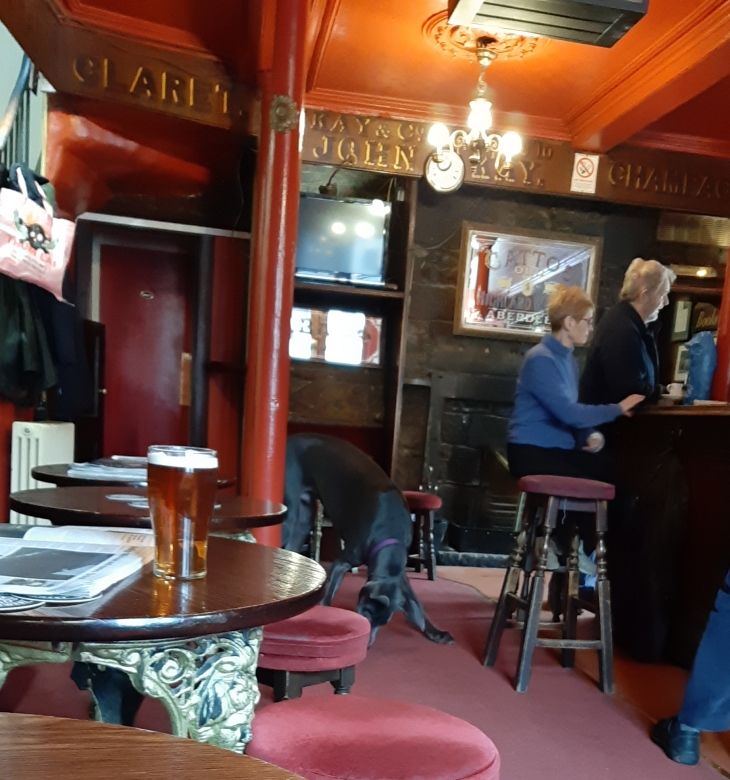 The dog in the photo, (No, I’m not being derogatory) and no, it isn’t a horse, eyed me up and down, when I entered the place, seeing me as a bone, until a snort of derision, when he’d licked my hand, told me, he wasn’t impressed with how I tasted. . . thankfully. It had the feel of somewhere, that wouldn’t have been out of place in the Highlands, and besides the extremely wary pooch who’d barked at me, was friendly. The next place was definitely on the tourist trail, Deacon Brodie’s on the Royal Mile, a Nicholson’s owned place, another chain, one that looks for, and looks after character laden pubs, and recognises the market for real ale. 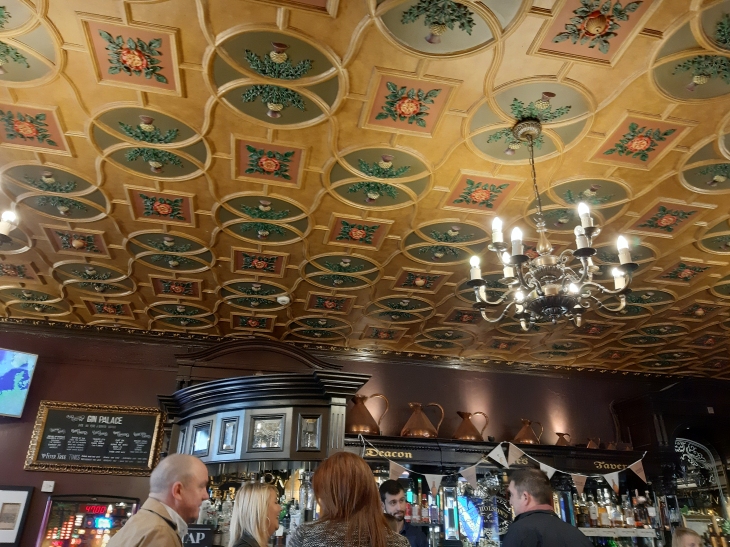 “Not a polystyrene tile in sight” 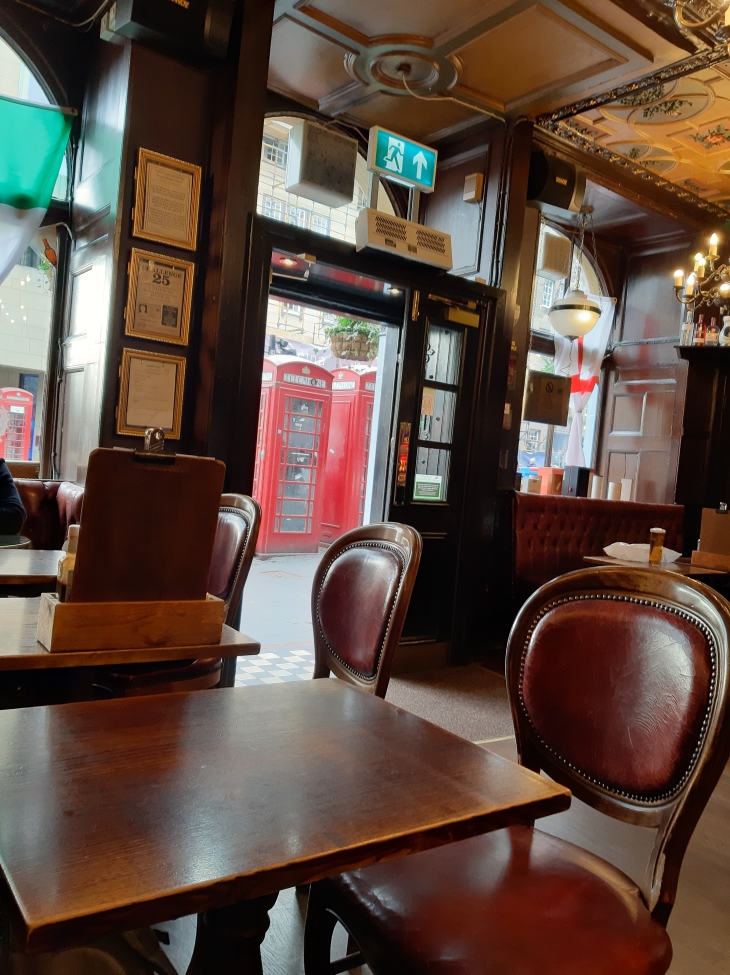 “Who needs a mobile phone, when you’ve these outside?”

The Kenilworth was next, before heading to an usual haunt, (I can say that now) another Nicholson’s owned pub, and in all honesty, I’m not surprised that the chain has picked up a few in Edinburgh, as there’s more character filled pubs in Scotland’s capital city, than you can wave a very big stick at.

“Who says history is boring?”

With my short itinerary complete, I headed for the Diggers, 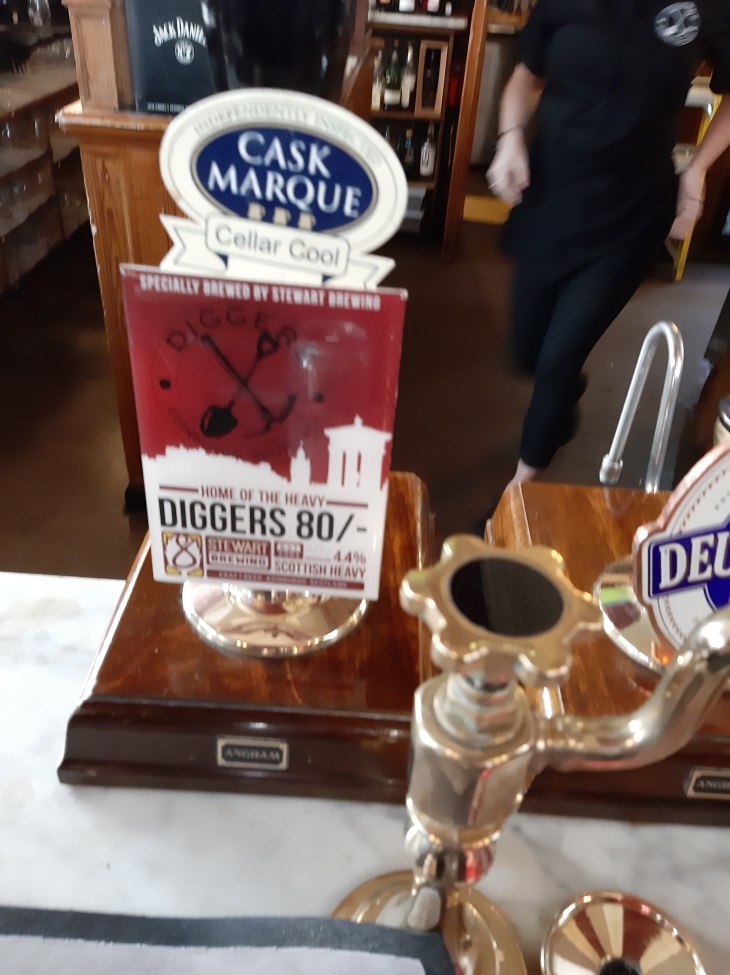 “A pint of heavy, and a steak pie please”

I’m not going to wax lyrical about how good the pies are, I think I may have run out of adjectives to praise the pastry marvels anyway, plus it’s rude to talk with your mouth full. Pie eaten, I said hello to the family I know, a caught up, getting another pint, I got engrossed in France v Scotland, they of the egg chasing fraternity. The Diggers was emptying out, and I joined the throng, magnetized by Tynecastle.

St Mirren started brightly, before we settled down, but when we did settle, then preceded to get bogged down. It was reminiscent of Ian Cathro football, aimless. It didn’t make for easy watching. The second half was better, good work from Sean Clare on the touchline, led to a corner, that was buried at the far post by the head of Clevid Dikamona, 1:0 to Hearts, and I expected the bottom club to be put to the Hearts sword, it didn’t happen, instead, Hearts reverted back to aimless football again, and the longer that went on, the more St Mirren sensed they could get an equaliser, the good work that Clare had done, was wiped out by his own goal, even the St Mirren fans were surprised that they’d scored, sitting there, I couldn’t help thinking that maybe it was time for Craig Levein to climb them stairs, back up to the boardroom. I like Craig, he’s Hearts through and through, steadied the ship after Cathro, but the last two games I’ve watched, have been bereft of imagination and guile.

I went back to the Diggers to watch Wales v England in the six nations. The English are not well liked around the rest of the British Isles, no more is this evident, than in a Scottish pub, where England’s opponents were being cheered, I’ve had the same experience in a pub in Cardiff, when England are playing in the six nations on T.V., I suppressed cheering when England scored the first try of the game, but couldn’t pretend to cheer, when Wales ended up winning. It’s nice to be disliked. I caught the train home, making use of the chance to sleep. I have loose plans of getting to one more Hearts game this season, but I’m not too hopeful, it’ll be more than likely, next season now.