Although the days drinking had been good, last season’s corresponding fixture will be one that will last long in the memory for all the wrong reasons, Steve Cottrell had only just been appointed, and the game was the last of Lee Carsley’s short tenure as interim manager. I was viewing this game with the pessimistic apprehension that grips us Blues fans, I’ve strong memories of Carol and Jeff from that day, they’d been flooding back too. I spotted Ian watching the automatic entrance doors to New Street station, with what looked like an expression of astonishment, he was using one of his freebie Cross Country tickets to get to Hull. Steve joined us, he’d caught the train into town, we left Steve to the next one up to Doncaster, and got the 07:03, taking a trip down manager lane, my loathing of Rowett well documented, I tried defending Zola when he was in charge, but to be honest, I would’ve attempted to defend Mr Blobby after Rowett. As we’re only just entering the second year of Garry Monk, we’ve had enough recent managers that we could’ve filled a three day conversation, I got off at Sheffield, as per my advanced tickets, Doncaster Tap was Ian’s destination. I was going to have a quick one at one of the Wetherspoons in Sheffield, but I’m not as quick a walker as Darrell, and hadn’t enough time. Going through Doncaster, Ian met back up with me, turns out, that a certain family member of his, developed a certain medical product that has been surrounded by an immense amount of notoriety, I won’t say what it is, but it’s blue, in tablet form and starts with a ‘V’, I had the pleasure of meeting Ian’s Dad, a couple of times, sounds like his Mom is every bit as much of a star, her doc had advised her to cut out the gin, meaning all spirits, so she’s migrated on to whisky instead. Touching down in Hull, he went off to the Hop and Vine, as I went off to start my itinerary, the Head Of Steam being first. 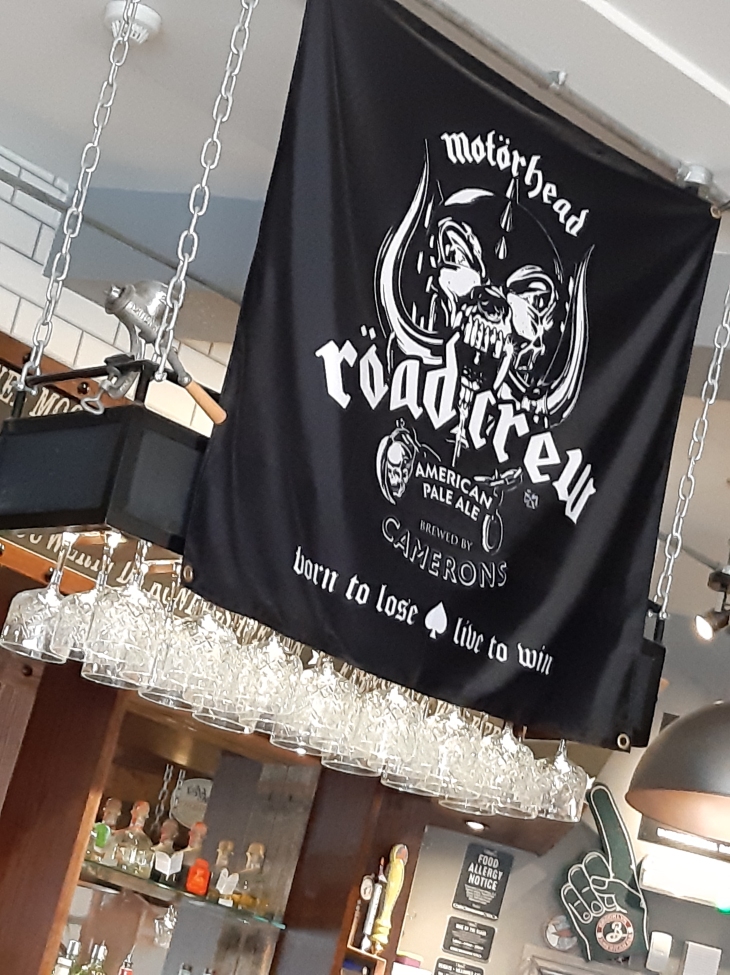 “Sod Spoons, I want one”

Head of Steam is another formulated chain that is expanding at a fair rate, but although still getting used to the decor and ambiance, I do like the ever rotating range of ales, never boring and Marston’s like. The one in Hull even does a Camra discount. The next place had a bit of that ‘wow’ factor, The Minerva Hotel, down by the sea front.

“Not unspectacular in itself”

Olde White Hart is one of those pubs around the country that feels like it should have a whole programme on BBC 2 dedicated to it, it’s that steeped in history.

“The Brexiteers of the Civil War headquarters”

Unfortunately, the beer selection wasn’t the best, so just grabbed a half, before moving on to the Lion and Key, a place that had made enough of an impression on me, that I was always going to stick it on the itinerary.

“A forerunner of Carling?”

The place is jam packed with things to prick nostalgic memories, or a modern social history museum for millennials, it’s brilliant, and the beers good too, W.M.Hawkes is a sister pub to the Lion and Key, the decor gives you the feel of an old travellers caravan, with the horse brasses.

“No wonder shire horses are so big”

Not that I’ve ever been in an old travellers caravan, just seen them on television. The next on the itinerary was shut, so walked the short distance to the George Hotel, a place time had crept up on me previously, and didn’t get to do, the old part of Hull, is similar to the Shambles in York, all narrow streets and back allies, a huge number of pubs are virtually within touching distance of each other, I had expected to bump into the rest of the ale trailers by here, but it’s one of those cities where you can spend all day circling each other.

Chilli Devil’s a micro pub that had opened since our last visit, was my last port of call, before heading to the ground.

“A brewery named after mine”

I met up with Darrell and Steve in the ground, standing, though should be sitting, with them, Blues were in complete disarray when Hull smashed us for six, last season, the short lived term of Worzel Cottrell, so depressing in terms of his press conferences, baffling tactics, team selections and awful losing football, that relegation seemed as guaranteed as day following night, Garry Monk has been little short of a revelation since he got lumbered with the job, a job that has been confounded by the E.F.L. sanctions that have been placed on us, rules that we’ve fallen foul of, as complex and complicated as the ‘B’ word in British politics. He managed to pull us round enough, that relegation was staved off, and this year has seen us compete at the right end. It actually feels like he’s been at the club longer than the first year, that he only just completed this week, because simply, there’s been so much coming and going, enough coming and going to fill a decade. I can’t help but feel that Monk won’t be with us long, before he gets fed up with running head first into the E.F.L. brick wall, whilst having his financial hands tied behind his back. We had what looks like a great midweek result against Bristol City away, I can’t comment, as I didn’t watch it, but we looked jaded against Hull. It was David Davis’ first game back after a long spell out through injury, I’m not saying he was rusty, but he was leaving heaps of reddish brown metal dust everywhere he went, Hull took the lead, and although we didn’t look like we were going to be blown away like a house of cards, we didn’t look like we were going to grab the game by the scruff of its neck, shake the living daylights out of it, equalise with ease, racing ahead, and not looking back, either. Half time didn’t bring any change, we were laboured, like a Sunday league side after the full back had had his stag doo, with the rest of the squad attending, the previous night. Camp gave away a penalty after a tired challenge, and it was two. It was pretty much routine for Hull, but at least it wasn’t as horrendous as the game last season.

Me, Mikey, Darrell and Ian headed for the old town area again, though Darrell was doing the navigation, and somehow, my terrible sense of direction had rubbed off on him, and we circled the micro pub we wanted to do, finally finding Vintage about ten minutes after we probably should’ve done.

“Still on the top shelf”

We caught the train back to Brum, dropping in on the Post Office Vaults, where J.K. had already beaten us to, Jinksy, and a sponsor money seeking Taffy were holed up. Taffy had spotted a rather nubile, curvaceous young lady, and was trying hard not to make his leering too obvious, as he kept glancing passed me, I confessed as he secretly brought my attention to her, that it was her prominent assets that had caught my eye, as soon as I’d walked in. We may grow older, but we’re still horny teenagers in between our ears when we’ve had a drink or two or three, and to be fair to Taffy, commendable that going dry in January in aid of charity was, it was good to have him back in the fold, I left the remaining two of Jinksy and Darrell, and went in search of the bus home.