I said farewell to Linda, and checked out. I found the local branch of the TSB ok, but then got lost trying to find the train station.

“Wear here to get lost, well I seem to be”

I found Ayr to be a beautiful place, inhabited by friendly people, and no, I haven’t been paid to say that, I’m being hon. . . genuine. I touched down in Glasgow and walked from Central to the being developed, Queen Street, vowing to ground hop at one of the Glasgow clubs, some time this season. Like the previous day, there was a huge amount of Celtic fans hanging around, if I hadn’t known any better, I would’ve thought that there wasn’t any other clubs in the Weegie, though there were far, far too many Liverpool shirts around for my particular liking too. It may have explained the police presence. I undertook the journey from Glasgow to Dundee, a journey that took me across central Scotland. We are forever stating that we’re a small island nation (When it suits), but the vast majority of us don’t get to see the subtle  differences in terrain and scenery, too busy with our boxed in lives, before jetting off to another country to spend our holidays. We don’t tend to allow ourselves to discover our own country, it’s classed as boring. Don’t get me wrong, I do have ambitions to take in places abroad, (Coupled with football ground hopping and local beer sampling obviously) but there’s still so many places I want to see in this country (Again, coupled with football ground hopping and local beer sampling obviously), I don’t, and unless I win enough money on the lottery to be able to do this instead of working to pay for it, see myself ever getting bored of this ‘small island nation’. We arrived in Dundee, my earphones shoved back in pocket, I disembarked, and embarked on discovering the most northerly place, up until now, I’d been to. As with Glasgow, there was too many Liverpool followers heading for the station to take in their friendly versus Napoli at Murrayfield. I don’t know if it was the sight of seeing red shirts with a plastic chicken embroidered on them, or the previous evenings curry continuing its own particular journey through my digestive system, but I was in need of lavatorial relief. One thing that everyone that has ever been in a Wetherspoons can agree with, their toilets are superb. After a pint in the Counting House, I went to go in the Bank Bar. With it being fairly close to the station, and a game being played in the city, as well as the commercial friendly in Edinburgh, I wasn’t too surprised to see a bouncer on the door, he asked to see my ticket, I hadn’t got one, I was neutral. What the ticket was for, surprised me. He hadn’t enquired because of football, there was a band on, it was all ticket, and they’d sold out, to say I was perplexed, was an understatement, it was a Sunday dinnertime, not either a Friday or Saturday night. A wee bit miffed, I toddled off to the Phoenix. This place was great.

“And this was the back of the food menu”

Both the beer and food were excellent, oh, and it was friendly too, so much so, that I had two different pints in there. It was time to check in at the hotel I’d booked over the road from the pub, and find a taxi, to get to the ground. According to the bloke on reception the information concerning my booking hadn’t been processed over from Booking.com properly. It was probably down to my ineptitude when initially booking it, thankfully, he booked me in anyway. I dumped my bag in the room, and went in search of the taxi firm in the next road, I was going to use, they were shut, well it was a Sunday. Fortunately for me, I hadn’t earlier noticed a nearby taxi rank, which now I was looking for one, I spotted. Intrigued by my Brummy accent, the inquisitive driver sparked up a conversation, which rapidly turned to football, it meant the journey sped easily by.

“Yep, the grounds are this close”

I was expecting to have to get a ticket, though there was a badly advertised cash turnstile, and I managed to get a programme too.

“With what seems like a strip of packing tape, down the centre” 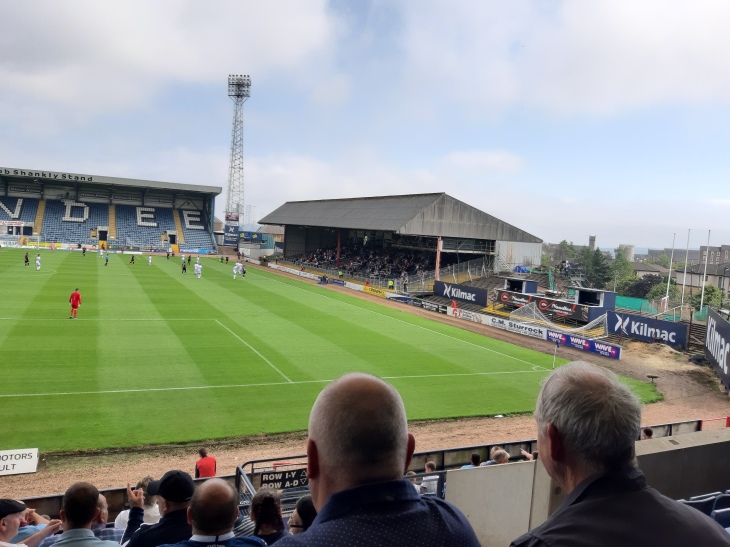 “No expense spared, seats bolted on to old terracing”

As I settled into my surroundings, and yes, it is Bob, not Bill, I was transported back in my memory to that fateful day in 86, I wasn’t at the game in body, but definitely was in spirit, Dundee 2, Hearts 0, even now, all these years later, hasn’t healed. 8 minutes from the point that was needed, to win the title. Hearts have never been as close since, and I feel probably won’t ever get as close again in my lifetime. On to the match, and Dundee were wearing their change strip of white. Confession time, it took me a couple of minutes to realise. They were just shading it though, and were fully committed to winning the game, a draw would’ve sent both clubs through at the expense of East Fife, as one of the best runners up. One of the home centre backs, even managed to still block a shot, whilst laying prone, with his head. It reminded me of the knight in Monty Python, who wanted to carry on fighting, after all his limbs had been chopped off. No going through the motions in this game. Dundee took a deserved lead, and probably should’ve added to it. They squandered several chances after good committed play, had put them in the position to convert. The second half was similar to the first, with Dundee bossing it. Gordon Strachan might be director of football, but they definitely showed characteristics of the diminutive one, Inverness, on the other hand, weren’t playing in John Robertson’s image, far from it. 1:0 didn’t really reflect the game, but the home support were satisfied, though maybe not enthused when the referee signalled the end.

Walking past Tannadice, I was still amazed at how close these two grounds were. I caught the bus back into the city centre, it was one of those new fangled ones that have comfy leather style seats, and portals to charge your phone, so I did so. Getting off, I went to the Market Bar first, a plush but unimaginative sort of place, a pass through kind of thing. I did get into a decent chat on football, with a local, as the Murrayfield friendly was on the big screen. Chat over, game over, pint finished, I moved on to a place that had taken my eye, when I was sorting my itinerary out.

“Why, doesn’t really need an explanation”

A hip place that was key keg only, but with an interesting range, the coffee stout I had, needed to warm up a bit, before the taste overcame the coldness, but once past the carbonation, did taste ok. I also had a raspberry sour, the carbonation adding to the flavour. The last place before I hit my digs, was the Speedwell Bar. 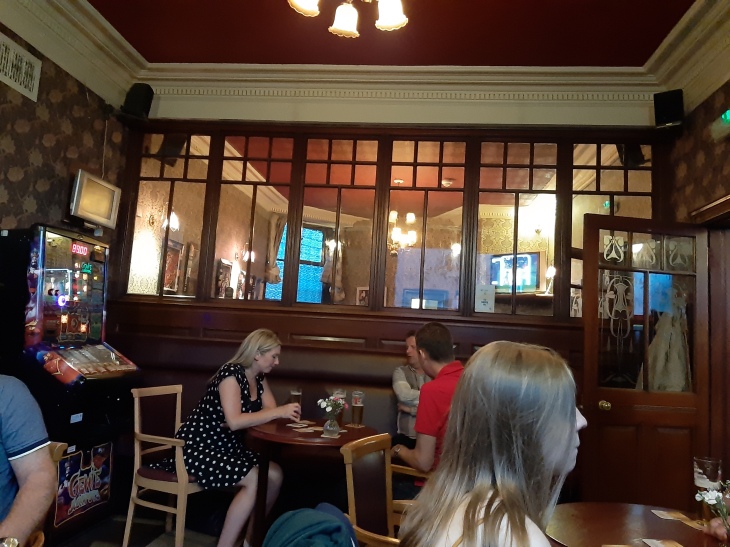 Had this not been on the same road as the hotel, I probably wouldn’t have done it, but once I’d actually got in it, was extremely pleased with myself for making the effort. It’s on Camra’s national inventory of historic pub interiors, and you could definitely see why. It was also in the GBG for just being a really good pub, which it absolutely was. The adjoining room was full of a bunch of female friends, who were having a whale of a time, singing along to a music channel on the television. Part of me wondered if one or two of them would be painting the tracks at the station in the morning.

“Stationed in front of the station, Our Wullie was everywhere”

“One a building, one a ship, though looks like two”

The tracks hadn’t been painted, though I’m not sure they’d have made it over the Tay rail bridge. I myself wasn’t unduly worried about crossing it, but seeing the remains of the original bridge, I felt an empathy with the victims of the disaster that had occurred there. I actually hadn’t realised how big the Tay is, it’s huge, though not as big as the Forth. They both make the Thames look like a stream. I had just enough time for a pint at the Booking Office after touching down in Edinburgh, before heading back down south. A group of Liverpool fans came in whilst I was in there, but at least they were proper Scouse, no colours announcing who they were, but with those irritating accents. Touching down in good old Brummagem, I went in the POV for a last pint before catching the bus back to the hovel I call home, well after all, I was on holiday.