Where I live, you’d expect to see Villa fans on a daily basis, and very rarely, a Blues one. Thing is, you tend to see as many Blues as Vile, the sad truth, you see more replica clothing from the presently successful Premier League clubs, than local clubs. As I got to the closest bus stop to me, there was a large group of Asian/Asian descendants (Where I live, is predominantly Asian populated) waiting near to it, I suspected for a coach to who knows where, one of them, was resplendent in the Blues away top, from two seasons ago, topped by a Blues baseball cap. Getting into town though, there was far too much claret and light blue, it was the first Vile home game of the season, and the fair weather fans were back. Already waiting on the concourse, were Jinksy, Steve, Mikey, Darryl and JK, we were all shortly joined by Spoons, before we made it down to catch the train to Nottingham. Touching down in the jewel in the East Midlands crown, the station was strangely devoid of any Ol Bill at all, we may have been early, but we hadn’t been the only ones on the train, and indeed most of the Blues contingent made its way to The Company Inn, a Wetherspoons, where plastic glasses were in use, they were prepared, even if the Police weren’t out of bed yet, they were the worst type of plastic glasses too, the squishy ones. We walked up to near the castle, to the Crafty Crow, an outlet for the Magpie Brewery but with a fair range of guest ales on.

“An unusual pair of wallflowers”

We moved on, and up to the Organ Grinder, an outlet for the Blue Monkey Brewery.

The Organ Grinder is a place to while away an afternoon, in the winter, the fire gets lit, and there’s enough reading matter on the bookshelves to keep you amused, including several back issues of the GBG, which Jinksy chose a couple to read aloud the entries for Brum. Pubs that have long since gone, ones still in existence, their ale range kept and added to, if some breweries had been lost, swallowed up by conglomerates. Memories rekindled. The next place, The Overdraught, was a new place for me, but if the beer tastes as good as the one I had, (A hazelnut chocolate stout) then I’ll be revisiting. It was to turn out to be my favourite beer of the day, and I could’ve quite easily, drank it all day.

“Not your usual art”

“Darth Vader, I see not”

The next place sounds more of a name you would associate with Wetherspoons, The Sir John Borlase Warren, is anything but. Another good boozer in the Canning Circus area of Nottingham, an area made a conservation area by the council.

“A study in Khaki”

The ale outlets come thick and fast in this area, gravity took us the short distance to a Nottingham institute, The Hand & Heart. 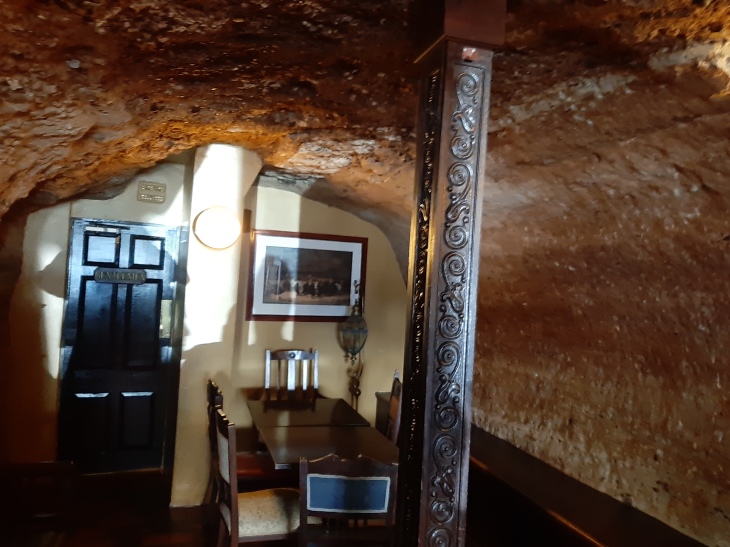 After the Hand & Heart, we headed over the road to Room With A Brew, a micro pub.

“After all the studying he did, we put Spoons on charge”

Although a decent little place, the beer that I had, was undrinkable, and I ended up leaving most of it. With Spoons fully charged again, we headed for the one place that he wanted to do, more than anywhere else in Nottingham, The Salutation. It’s not got the best range of ale in the world, but it’s a proper rock pub, and doesn’t make any apologies for it. Personally, I like the place, but each to their own, I could understand how it wouldn’t be everyone’s cup of tea. We met up with a mate of Mikey’s, who was having the spare ticket off him. Pints drunk, it was taxi time, or more to the point, Uber time. Once Mikey had gone through the hassle of ordering one, that is.

Getting in the ground, I saw Tron for a chat. I know he owns his own business, and it just happens to be a travel company, but you can’t fault his dedication to the cause. 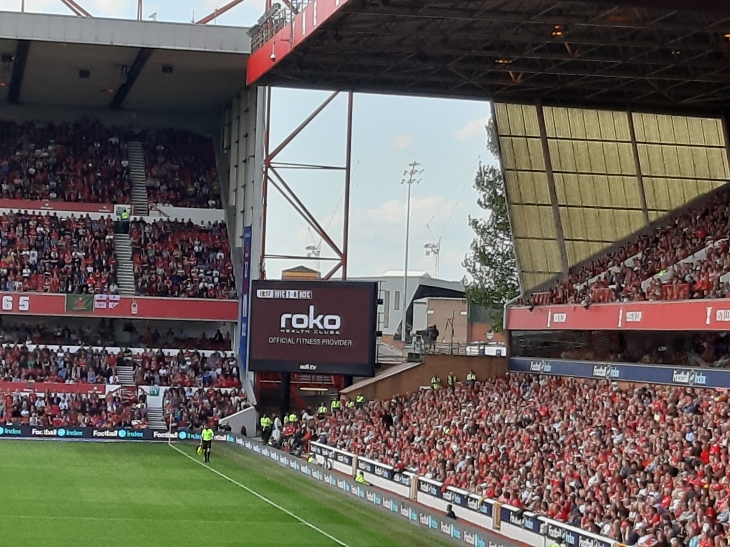 “It’s close, but no Dundee”

Neither side were really making much of a mark on the game, but then as news that Vile were losing 2:0 at home to Bournemouth was still making its way round the away end, Joe Lolley, a self confessed Vile fan, wiped the smiles away, with a well taken goal, taking great delight in making sure that we knew who he was, and what he’d just done. He was more bothered with rubbing it in with us, than he was, taking the acclaim from the home support, though I know, given the opportunity, I would’ve done the same. Forrest’s tails were up, and it was soon 2:0. We were toothless, Forrest allowed us the ball, where we couldn’t hurt them, and we didn’t look like we had any ideas.   As halftime came and went, we actually hadn’t played as bad as we had at Brentford, but that didn’t really matter, we were losing. A lackluster Gary Gardner was replaced, by Gimènez who came on to make his debut, but it didn’t make any difference, in fact, not only did the home side make it 3, but were picking us off at will, with the rest of the trailers giving up, I followed suit, and left early.

All except Jinksy, were in the Navigation Inn, another new place for me, but it won’t be the last time I go in there. Ridiculously close to Meadow Lane, a visit there, will definitely include this place, possibly even when we next play Forrest. We all split up here to do different places, I wanted to do the one place, I had had set my sights on for the day, and went back up into the city centre, to do the Barrel Drop. 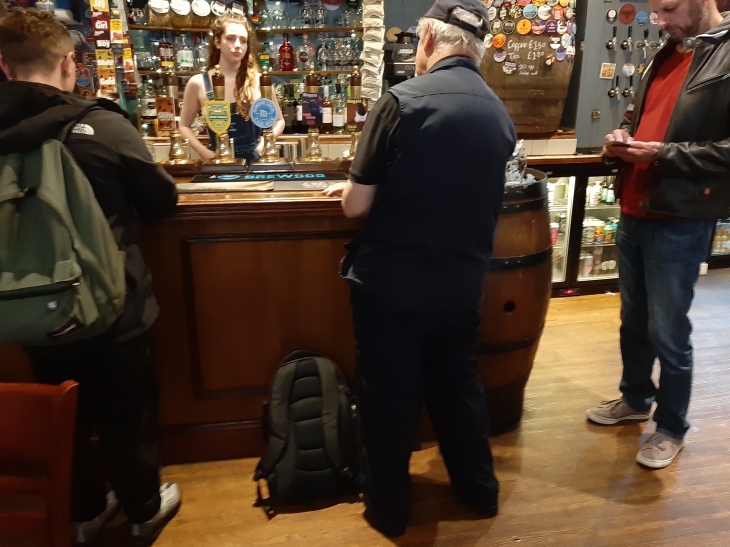 I’m glad I made the effort.

“Those dots are pins, honest” 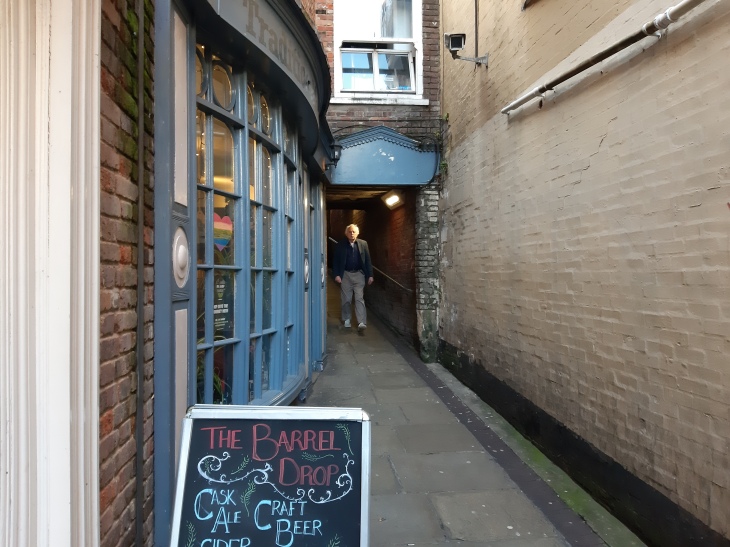 An absolute gem of a place. Its location and looks from the outside, give way to a Dickensian shop vibe, but it’s not. I made it back for train that everyone was making for, including Andy and Scholy, talking to them, and as Steve came past, I mentioned to him, that Scholy was Johnny’s lad, before joining him with meeting the rest on the train.

Barry Wood was holding court when I got there, he’s a harmless enough lad, but does have a weakness for self promotion and tall stories, he’s ok, as long as you take him with a pinch of salt. Getting off at New Street, me, Mikey, Steve and Darryl, went in the POV for a last beer, before parting for our individual abodes, but on this occasion, not happy ones, as I was heading up the stairs, I said farewell to Jinksy who’d come in, he’d met up with Nat Peters, and had caught a later train afterwards.