I can’t for the life of me, understand why people take their time coming out of work, personally, I can’t get out quickly enough, I mean, cloud of dust quick, probably only slightly slower than what Darryl would be. I can understand people being slower than me, but it’s like some people don’t want to leave work. I shouldn’t really criticise, as one of those people who I have in mind, when it comes to leaving work, was giving me a lift home, but I wanted to bounce back out, to take in this game. It was one of those occasions, when you know you’re addicted, your focus becomes blinkered, it’s all about that ‘fix”, you push yourself physically, mentally. Rational thought walks out of the door, shaking its head, with a look of disgust on its face. I can’t vindicate what for, or why, I was busting a gut, to get a train, as it was trying its best to rain, to take in a game, a game that I hadn’t really got good reason to be interested in, but once I worked out that I could physically do it, then nothing was going to stop me. After racing down to Aston station, without breaking into a run, and wondering why I couldn’t just be normal and domesticated, the train was delayed, I was sure Ian was still on holiday, when the train actually arrived, it was packed like a tin of sardines. After a false start at Gravelly Hill, the station, not the motorway interchange, I got off at Chester Road, my itinerary was only one pub long. 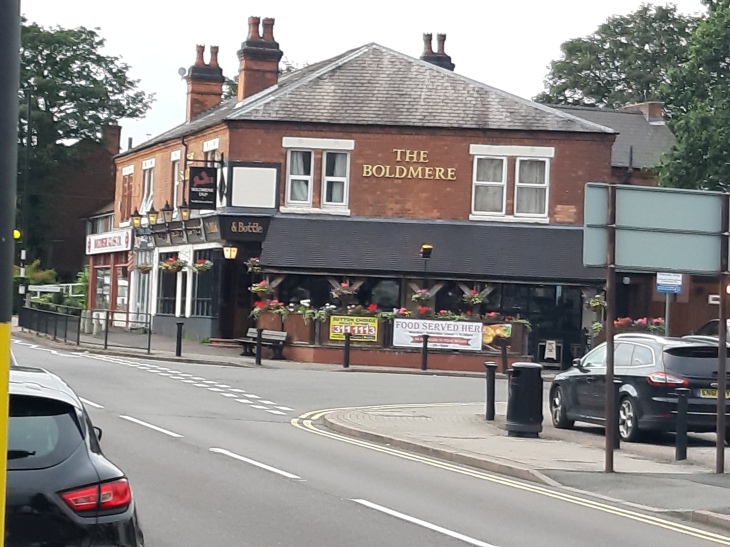 Itinerary or not, it was still a good pub to visit, not only because a beer after work is a most welcome sight, but belonging to the Joules Brewery, you know it’s going to be a good pub, with good beer. Joules is a brewery that didn’t succumb to the conglomerates who were hoovering up breweries in the 70s, 80s, and 90s, at a rate of knots, to their credit, they steadfastly refused any advances, keeping what they had, concentrating on looking after their beer and customers. The Boldmere Tap was what I’ve come to understand and expect of a Joules pub, little bits and pieces that catch your eye. Photos and advertising memorabilia from a time gone by.

“Not just any port in a storm”

Hungry from the slog at work, had they sold stilton and crackers, I might have just jemmied the cabinet with the last remaining bottle of port open, and had that, but I made do from their unique range of crisps. When the owner listed the different flavours, I thought he was pulling my leg, not often do you find Roast Pheasant and wild mushrooms flavour, but I thought he was a bit harsh when he recommended Wild Boar and apple, I’m not wild, or an apple, bore I maybe, but at least get the spelling correct. With what feels like at least a couple of centuries ago, all evening kickoffs used to be 7:30, they’ve messed around with them, but in the majority of cases, they’ve worked out, that 7:45, gives everyone enough time to get away from work, and get to the ground in comfort, this one was kicking off at 7:30, so one pub, was all I was going to be able to do in comfort, it was off to the ground. With a ground you’re not familiar with, in an area, you’re not familiar with, judging the time it takes to drink up, make the ground, and get in, isn’t easy.

I don’t pay much attention to that lot down the bottom of the road I live on, so I wasn’t aware of the link that Boldmere St Michaels had with Vile. 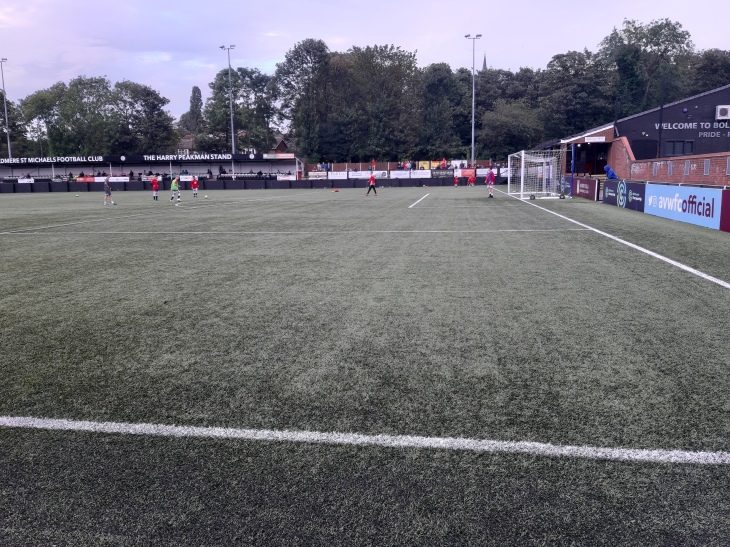 “Yet another 3G pitch”

“With some 2D Vile supporters”

Boldmere were physically bigger than the Swifts, and they were trying to use it to their advantage, a good bouncing through ball, led to a Stourport striker getting on the end of it before the out rushing keeper did, lofting it over the custodian to make it 1:0 to the away team. Stourport had a really good chance to make it 2, but spurned it. Either Swifts were playing a good offside game, or Michelle was thick, as they kept getting caught, Stourport were having the better of the game, well they were until a speculative shot got deflected, and somehow crept into the corner of the net. 1:1. The lead should’ve been restored but for a lack of talent, that meant a mad scramble, was a fruitless mad scramble, and not a successful mad scramble. A good cross from Swifts, deserved a good finish, but it didn’t get one. The next goal, was a good finish, it was just for the wrong side. From falling behind, Boldmere were in front, and they went into halftime in front, I moved from where I was, to closer to the goal that Swifts would be attacking in the second half, passing as I did so, far too many Vile fans for my liking. It felt like everywhere I looked, there was one. Young, old, male and female. With moving positions, it was fairly obvious that I was wanting Stourport to win, I wondered if those favouring the home side, knew I was Blues too. If Stourport had had the better of the first half, they were definitely having the upper hand, as they pushed for the equaliser, they even should’ve had a penalty, but the referee deemed it to be a free kick just outside the area, on another occasion, they did get the ball in the net, but the hand ball in the lead up, was never going to go unnoticed. On one of the rare forays over the halfway line, Michelle got a free kick, the scuffed shot, was completely misjudged by the Stourport keeper, who made a right hash of it, patting it towards one of the Boldmere strikers, following up, who gleefully smashed it into the roof of the net. One of the St Michaels substitutes looked good, so much so, that the next time he received the ball, he jinked past a couple of Swifts midfielders and a defender, before curling a shot, left footed beyond the keeper and just inside the far post. 4:1, the upper hand had contracted gangrene, and had been well and truly amputated for its trouble. I wandered towards the exit as it moved towards fulltime, stopping to laugh at a one liner that the referee’s assistant uttered to the time wasting Boldmere players, when they were slowly taking a corner. I hadn’t heard officials chatting to players, since I was stupid enough to think I had enough talent and far too much enthusiasm to kick a ball, whilst wearing a football kit. 4:1 it finished, St Michaels were in the next round.

I contemplated returning to the Tap, but with having to get home, and having to get up for work in the morning, I listened to the common sense that was screaming at me, and went back to the station, on the train back, I had virtually a carriage to myself, no more sardines for the night. Getting off, I encountered a confused lad, who’d got off too, he’d contrived to miss his stop, I informed him that it was nothing I hadn’t done before, and will, no doubt, do again, probably on the Underground, possibly soon. I’d got my fix, I was happy again.