After St Andrews, obviously, both Shrewsbury and Wolves, due to their closeness to where I grew up, (physically, though probably not yet mentally) I’ve done games at Derby, the most. Technically, it can be claimed I’ve attended more games in London, but that’s combined, and in all seriousness, doesn’t count in my humble opinion, it’s all about how many times you visit a single club. After meeting Steve, Jinksy and Ian on the concourse at New Street, and the bar code not working at the barrier, we got the train to Derby. We give Ian a fair bit of grief when it comes to late running and cancelled trains, due to his job as a supervisor in the signal box at New Street, it’s very much tongue in cheek, but any opportunity to tease him, is never missed, whether he’s working or not, even if he’s on holiday in another country at the time of a late train. A huge part of the attraction of hanging around with the ale trailers is the constant Mickey taking, nobody is immune, and it never gets personal. Jinksy’s reaction to the ‘trolley dolley’ wasn’t missed by any of us, for instance. A nice looking girl of Eastern European origin, although entirely coincidental, as he did want to purchase a cup of tea off her, he was rather sheepish as we ribbed him about his reaction. Derby wasn’t a hard away game to get to, when I was still living in Telford, it’s even easier now, after the Baggies, it’s our shortest trip. After the barcode not working at the barrier again, we were soon looking for a war memorial, dedicated to those railway workers who lost their lives, as Steve wanted to see it. Not finding it attached to the station, disappointed, we carried on towards the centre of Derby, passing what turned out to be the memorial, we’d been looking for, an impressive construction, one that couldn’t fail to bring the futility of war down to you. On the way up to the Babbington Arms, it was my turn.

“NOT my number, it belongs to a fellow idiot”

The Babbington Arms hasn’t got the ‘wow’ factor in terms of architecture, not like a lot of Wetherspoons pubs, but in terms of service, and quality, it’s the best. After Norwich, Derby is arguably the best place for real ale, there’s no shortage of pubs eligible for the GBG, for the Babbington to be a constant entry, should show you how brilliant the place is, it just isn’t eye candy. We find ourselves in the middle of the rugby world cup at the moment, something that 30 years ago I would’ve turned my nose up at, but these days, I’m a lot more mellow, and rugby does actually grab my attention, JK had posted on our WhatsApp group that he was in Brum watching the Ireland game before getting the train, we were watching it, whilst having breakfast, though we were talking about our hopes of an away game at St Andrews v Coventry next season. Darryl was first, obviously, off the next train with the others following him into the Babb, Badge and his ‘Derby’ coat, last in.

“JK was not amused”

We trooped off through the centre of Derby to the Tap, having a quick half, before nipping round the corner to the Exeter Arms, where White Swan Paul and his crew were, the Arms is a tap for Dancing Duck Brewery, and I had a lovely pint of Dark Drake. After saying hello to, these days, a younger looking Paul, we headed off to, what is, my joint favourite pub in Derby (And there’s simply so many to choose from) Gaz from Hereford had stayed with us. 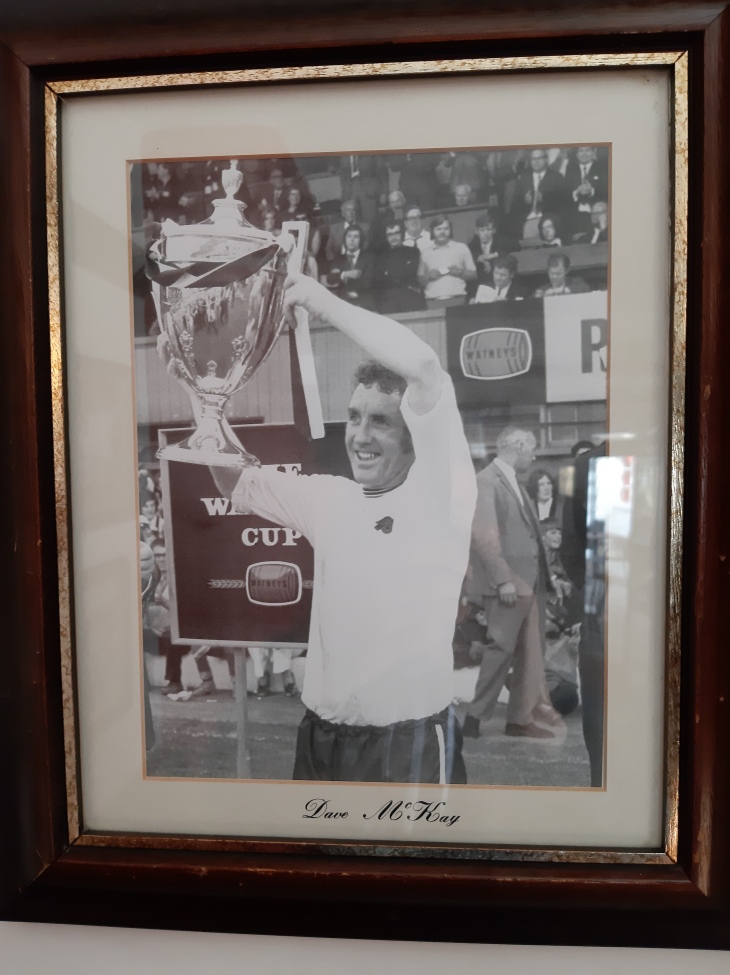 “Yup, that’s the reason for the Baseball link”

I’ve been in the Peacock a few times now, and I’m still finding things in there, I’ve missed. It maybe leased off Marston’s, but not tied, so although they do have to have a few beers from the Marston’s stable, they can sell genuine guest ales. Ian’s got a reputation for philandering, something that I can relate to, I’m not proud of my chequered past, when it comes to the affairs of the heart, but I can honestly say, I’ve had an awful lot of fun. I’m not entirely convinced that his philandering days are over and done with, I’m not entirely convinced that mine are, but life moves fast as we cling on, opportunities come and go, sometimes you reach out and grab one, sometimes you get grabbed. No visit to Derby is complete, if you don’t manage to get to the Furnace, though if you don’t know about it, then when you do actually make it in there, then you’re in for a treat. It’s just out of the centre of Derby, but not by much, and where it is, you don’t expect it to be as good as what it is, and it’s excellent.

There’s a dearth of decent pork pies outside Shropshire, Melton Mowbray just doesn’t float my boat, I’m even more of a pork pie snob, than I am a beer snob, but when Ian bought one and offered anyone a slice, I noticed it was similar to the ones I’d grown up with, taking him up on the offer, I wasn’t disappointed, I now have a list of 2 pubs that I can get, what I class as, a proper pork pie at. We moved on to the Flowerpot, another great pub, but one that is renowned as a music venue, though it’s more tribute bands than original ones these days. Coming out of the Flowerpot, me and Mikey, who were straggling behind the rest, then contrived to miss each other, so instead of hitting the Smithfield, I made off for the ground, dipping into the Alexandra for a quick half.

“The train is always on time in here”

The Alexandra is a haven for anyone remotely interested in trains, and the quick half, wasn’t as quick as it should’ve been.

I got to the ground after kickoff, something that is almost compulsory, if not just standard, but hearing the crowd inside celebrating, forlornly hoped that it was Blues that taken an early lead, my hopes were dashed, 1:0 to the home side, it was. I can’t say we’re totally rubbish this season, and I can’t say we’re pulling up any trees either, the ingredients appear to be there for a half decent cake, but The Clot hasn’t worked out the recipe, or even the dials on the oven. The rest of the half didn’t instill any hope in me, that, flour, butter and sugar was going to be placed in a bowl, needless to say, there was nothing to indicate that an equaliser was going to be discovered from somewhere.

“The game’s over there Darryl”

The ale had taken effect, not just with certain others I know. A so called ‘Team bonding’ exercise had gone spectacularly wrong for Derby during the week leading up to this game, but those effects, hadn’t shown themselves. An early first half goal, was added to by an early second half goal, there hadn’t been much chance of an equaliser, trying to pull two back, looked nigh on impossible, but instead, the second seemed to ignite Blues, we pulled a goal back quite quickly, albeit from the younger of the Gardner Sisters, we hit a purple patch, and Sunjic hit a sumptuous equaliser.

“I just love the smell of smoke bombs in the afternoon”

We weren’t just back in the game, we were dominating it, PENALTY, we’d gone from being 2:0 down to being on the brink of leading 3:2, but as usual with Blues, things don’t go the way you’d expect, it should’ve been a formality, the Juke couldn’t miss could he? Not him, please not him, anybody but him, or Bellingham, anyone else wouldn’t have bothered me, yeah, you’ve guessed it, I’ve built it up enough, Juke missed. We ran out of steam with the penalty, and the dominance subsided. Derby breathed a sigh of relief, they also picked their way through the stuffing that had been taken out of us, and found the winner, but then that’s Blues, always there, dishing out false hopes, it had been a rollercoaster of a second half, and I’m sure for an interested neutral, a riveting watch, but for us, a kind of same old, same old.

I went back to the Alex, where everyone was. 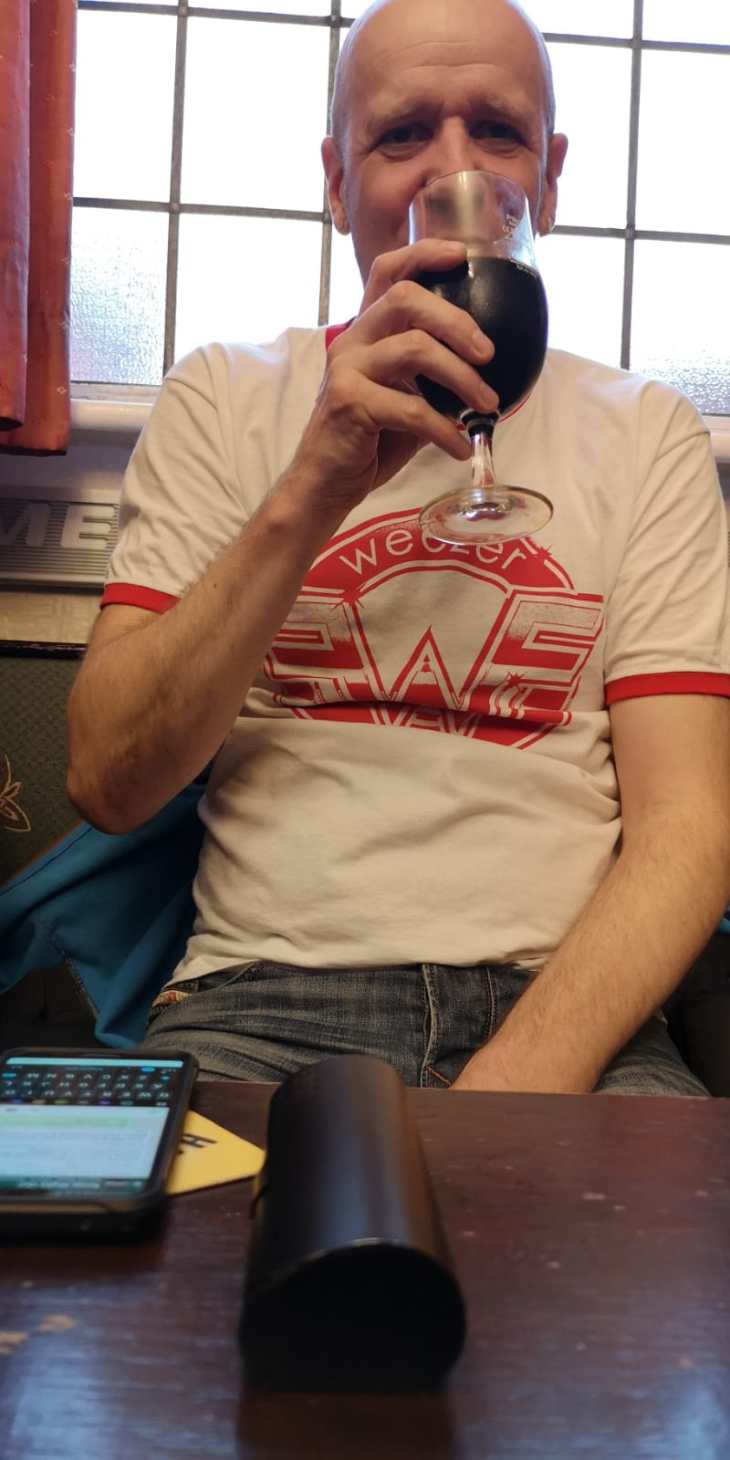 “An extremely rare sighting at an away game”

I was joined by Bryn, Gavin and Birdy, apparently, Gav’s missus knows when he’s reading this rubbish, as he’s always laughing at it, all I can think, is it must be the serious stuff he finds funny, as I can’t think anyone would actually find amusing the stuff that’s supposed to be funny, funny. I borrowed Bryns cap to do an impression of Tommy Shelby, it was just an excuse to cover my fizzogg, if I’m being honest. As a compromise for wearing a coat, Birdy has taken to wearing shorts. I confided with Bryn on a post I’m considering for this, concerning an away game from the 91/92 season, one that Birdy played a part of. As mobile phones and thus photos were just a pipe dream, It might take a bit to compose something that might actually be worth reading.

Mikey shadowed the fellow in the photo back to Brum, making sure that Darryl got home ok, Aida caught the car he’d arrived in, back home, with Birdy and team Bryn going too, I found the rest in the garden, before we moved on to The Brunswick, a fresh copy of the GBG now tucked under my arm.

“A photo bombing opportunity doesn’t go begging at the Brunswick”

Truth is, I never feel like I want to leave Derby, not because I want to live there, but it’s just such a comfortable place to drink great beer, in great pubs. Eventually, I got enough will power together, to get the train and the bus home. Lost again, but a brilliant day out.