Was a time, in the not too, distant past, where you had no option but to trust the timetables on bus shelters, if there was someone already there, you always enquired as to how long they’d been waiting, it preceded a conversation, the length usually depending on when the bus arrived. Now we have VDUs, proclaiming how long till the next service, it definitely gives you peace of mind that there is a bus going to be turning up, but it’s another piece of human interaction lost, as we’re glued to whatever social network we’re unconsciously chained to. After getting advanced train tickets for my next trip up to Edinburgh, I joined Spoons, Jude, Steve and Darryl, before Ian joined us. Jude is counting the days down before she deservedly retires, as I’ve already stated, something I’ll never get to do. I found out that the Macc Lads are playing the Institute, the Friday night before I go up to Edinburgh, in my head, I can do it, but I’m not convinced my body will be up to it, I fear the days when I had the energy to do this sort of thing, have long gone, consigned to a siding somewhere to go rusty. Paul Mason joined us on the train, on his way up to Middlesbrough and we swapped information on the pubs to go to, as he’d not long been up to Leeds, and we’ve warmed to the amount of micro pubs in Middlesbrough, and told him which showed sport on the telly and our own particular favourite. We also discussed the possibility of the game between us being moved, we ascertained that if it is moved, it will be entirely down to the West Midlands police as Sky have a good choice of other games that they can bolster their viewing figures with. I’m dreading a Sunday lunchtime kickoff, although it will give me a ground hopping opportunity with a free Saturday, if it is moved to then. We touched down in Leeds, Paul heading for his connection. Wapentake was the first port of call, a micro pub that wasn’t open the last time I went up to Leeds. A place that has an European feel to it.

“Oh, and we beat the Aussies too”

We grabbed something to eat in the Wapentake, and this was when the continental feel vanished, I spotted spam butties on the menu, we were still in Yorkshire. I hadn’t had spam in years, and I can honestly say, I totally enjoyed it. Right next door was the Doghouse, another little micro pub, another, I hadn’t been in. Not quite as good as the Wapentake, but the beer was well kept, and the art on the walls were from a local artist. It was more than can be said of the Duck and Drake, the next place. The beer wasn’t brilliant, and the owner seems to think that nobody that comes through the door, knows a thing about the stuff. It’s worth going in, just because of all the music memorabilia, 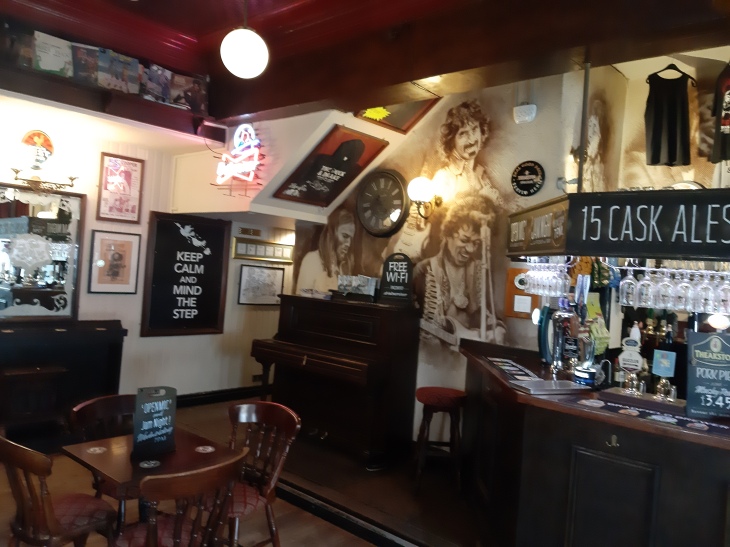 From the Duck and Drake, we went to Whitelock’s Ale House, a Leeds institution. It’s a beautiful place, on the same level as The Cafe Royal in Edinburgh, Black Horse in Preston, Barton Arms in Birmingham, and The New Beehive in Bradford, but it does get very busy on a Saturday lunchtime, and I wasn’t able to get any photos, so you’ll just have to take my word for it, look the place up on the tinternet, or just visit the place, and see for yourself. After Whitelock’s, we had a quick look for a micro pub and bottle shop, that both me and Steve had been in, but unfortunately, it appeared to have ceased trading. We carried on up to the North Bar, a place with a trendy cafe bar feel to it, for me, a place without a lot of character to it, though the beer was good. The next place the wonderfully named Belgrave Music Hall and Canteen, was and is, very much a place frequented by Leeds student population, the five of us, raising the average age of the clientele in there up to 25, although very much a student hangout, and obviously none of us even mature students, and thus, out of place, the ambiance doesn’t make you feel that you are. It’s not your usual pub layout. You’ve got separate unconnected counters selling pizza and burgers either side of the main bar, coupled with a resident DJ in the corner opposite, yet it’s comfortable, somewhere that if I was a student in Leeds, I would myself, hangout. With time moving on, and Elland road a mission to get to, we headed back to closer the station, Tapped was the first, somewhere that always feels new, yet it’s been on the Leeds ale scene for several years now. A cask ale with an ABV of 0.5% was noted, but was being sold at the same price as beers of a usual strength. Our brewing expert was questioned as to how it could be, Spoons educated us, to it being brewed from the same ingredients, using the same equipment, and the same process, so effectively, same price could be vindicated, regardless of ABV, it was our perception that it should be cheaper, not the reality. Friends Of Ham, was to be our last place, before grabbing a taxi to the ground.

“It didn’t indicate where the squeak was”

You go past Elland road on the train on the way into Leeds, I’m sure the thing laughs at you, knowing that you’ve got to try and work out how to get back out to it, and then away from it afterwards. 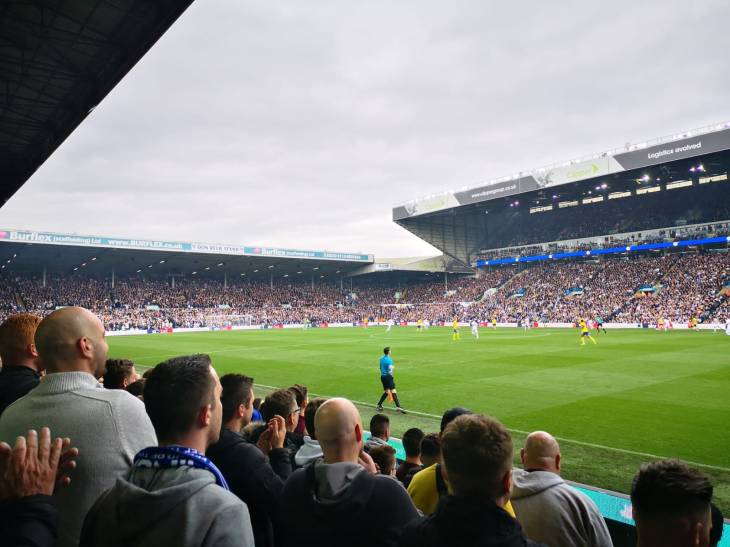 “Only come to see the Blues”

Elland road can be an intimidating ground to go to, when the team’s playing well, with a loyal, passionate, expectant crowd backing it, they’re playing well at the moment, a ‘national’ club that will no doubt, sooner or later, be back in the top division. This particular game, brought a celebration of 100 years in existence, a club that picked itself through the ashes of a disgraced Leeds City, it brought with it, the biggest crowd of a, still, fledgling season. It also brought me face to face with one, I hadn’t seen in well over two decades, one that had with him, a grown up son, I’d never met, as he wasn’t alive when I last saw his Dad. I’m not even going to attempt to spell Andy’s surname, a name of Polish origin, a surname, like my own, had been shortened but in Andy’s instance, to Macca, something infinitely easier to remember, as nicknames are. Trying to focus on the game and catching up on two decades worth of life, is never easy at the best of times, but when you’ve been sampling good ale, both local and national, and quite a lot of it, it makes it ultimately more awkward, and you tend to repeat questions, and forget to ask others. It was however, great to see him, and we couldn’t help but reminisce about games and times, we were in each other’s company. It’s strange how your life moves and you lose touch with people, but it is what it is. Sometimes a team can be inspired by a historical celebration, sometimes it can become starstruck and freeze, Leeds, with their ferocious backing, had their tails up, we were in danger of being blown away, but we managed to subdue them, and grow into the game. We made it to halftime 0:0, but not before Sunjic had earned himself a fifth booking of the season, and a suspension, something we could do without, as our most expensive signing, is an integral part of both our midfield, and team in general. The second half brought a more confident Blues out of the dressing room, and we were more positive attacking wise. With a break in play, I took the opportunity to respond to the call of nature, while I was making use of the 1970s toilet facilities at Elland road, the class of 2019, took the lead. Although we tried to claw our way back into it, Leeds lead, stayed intact, with added time impending, I left to meet up with Darryl, who was was with his mate from work. Spotting Ian at the taxi rank outside the ground, we managed to grab one.

Getting the driver to drop us off, we went to The Grove, a lovely little back street boozer, with an untouched feel to it, here, Darryl’s workmate, told us that Robert Hopkins, or Hoppy, had stood by him at the game. For those who don’t know who Hoppy is, he played 173 times for Blues in two separate spells, a tenacious winger/wide midfielder, who is a proper Bluenose, stories about his love of Blues are legendary. The Gardner Sisters profess their love for Blues, but for me, it’s just smoke and mirrors, Hoppy, however, IS one of us, confirmed (Not that it needed to be) by this admission from Darryl’s mate. Hoppy, through contacts, could’ve easily have got a seat in the director’s area, but he chooses to be in with his fellow Bluenoses. For me, that’s the mark of the man, doing something he loves doing, supporting Blues. Over to you, Gardner Sisters. We walked the rest of the way back to the station, but ducked into The Hop, a great pub underneath the station itself, before catching the train home to Brum, though I had to stand up for biggest part of the journey, as there was more passengers than seats. We may have lost, though I was expecting for Blues to get beat, but it had been a good day, visiting plenty of great pubs, and Leeds has many more to choose from, if only it wasn’t for that trip out to the ground and back. . . . . .