A game in Cardiff holds special meaning for me, it was the first game I managed to get to after I went head surfing. I’m almost 100% better, the last bit is proving to be the most difficult, and highly irritating to me personally. It’s something that if I had a fair crack at, I know I would be able to conquer, but due to circumstances, I get one day a week to stretch my spoken vocabulary, and as such, it’s always letting me down. Mid sentence, and I forget the right word, It’s getting better, but infuriatingly not quick enough. So for those who have to put up with trying to guess what word I’m desperately searching for, and giving up, imagine how I feel, because it’s far worse than just embarrassing to me. Jinksy was outside the entrance to New Street station having a cigarette when I got there, it still seems strange to see him with one, as for a long time, he didn’t indulge on the regular basis he does now. In another lifetime, I had a really good go at taking it up, until I wondered what I was trying to prove, and gave up with that little piece of rebellion, because that’s what it really was for me, at that point of my life. Daft, when I look back, but then my life has been full of daft things. With just me and him till he got off at Gloucester to meet up with Steve, we spent the journey chatting about Scottish football, as we do quite often, and for some reason, got talking about long running TV programmes, including Songs Of Praise, a programme that neither of us could understand, who would actually watch it. (I so want to put in something about watching it religiously, but I’m going to refrain. Not because it’s blasphemous, but because it just wouldn’t be funny. Stop nodding your head, it’ll fall off) As Jinksy got off, so the headphones went in, and I stared out of the window at England changing to Wales. I’d been, as usual, keeping an eye on the forecast for where I was going to be, and it hadn’t looked promising, pulling into Cardiff, there was plenty of Blue sky, getting off, there were plenty of Blues supporters too, I was expecting maybe a handful, but not the three dozen or so, they were either doing the same thing as us, and finding pubs that were showing the rugby world cup final, or making use of the extended openings. The initial surprise at the weather, was stifled, as coming out from the station, the wind did its best to blow me back in, up the steps, onto the platform, and back on the next train, I battled almost horizontally to the Queens Vaults, where Spoons, Darryl, Mikey and JK, were sat watching England starting badly. Halftime, pints finished, but mine, no where near, the rest went off to the Owain Glyndwr, as I finished up and followed up, Gary from Hereford was in there when I joined them, not noticing that the rest were on halves, I got myself a pint, their halves finished, and with the pub so obviously wanting South Africa to win, they moved off onto the Head of Steam, as I stopped to catch up with Gaz, telling him of how great Norwich is as a place for real ale. In relation to how good Norwich is, think Real Madrid in terms of winning the Champions League. Still trying to get on the same page in terms of pints, I was playing catch up, trying not to drink too much, too quickly. Not easy, as I spend too much time talking and not enough supping, and trailing the rest of the trailers. Head of Steam’s are what they are, always a good selection, always quirky staff, but like Wetherspoons, lack that traditional feel. Still trying to flick through the pages to find where the rest were, I followed the rest to Goat Major, a Brains pub. 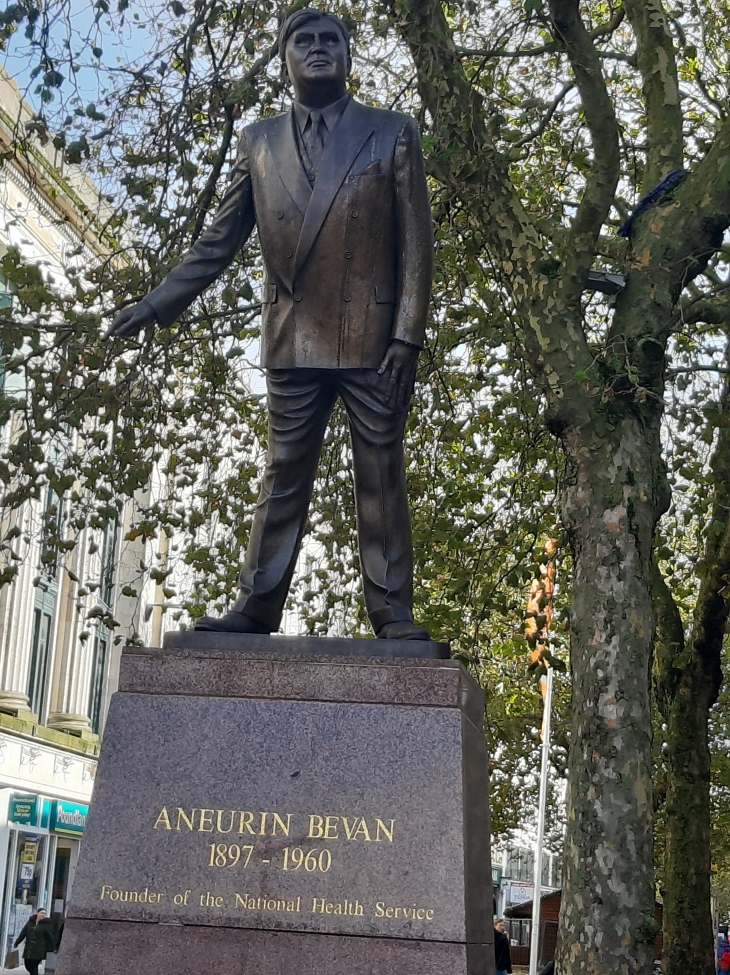 Turned out that Taffy had had money on South Africa to win, which they had, as England hadn’t bothered turning up. In a fit of confidence, he’d then put a tenner on Blues, hoping to capitalize on a possible run of good luck. We hoped to find that the Flute and Tankard was making use of opening early due to the rugby, it wasn’t, but the fantastic Pen and Wig, was fairly nearby according to JK, so we went there instead, I was finally on the same page, but the words were to become blurred.

“Not quite, but almost”

We chatted about bands we’ve seen multiple times, something I haven’t done and don’t really get to do on minimum wage, as I spend virtually all my disposable income, (And there isn’t a lot) on the Trains, ale and football combination. Not manoeuvred by me, though you probably would think, the conversation then deviated onto clubs other than Blues, that we’ve seen on multiple grounds. When I’m flicking through the 250 odd TV channels that Sky show, trying to find something to vaguely take my interest, I might actually work out which club that I have seen on the most grounds other than Blues. Being a bloke who lives on his own, I haven’t got someone in the room moaning when I channel flick, so I wouldn’t hold your breath. Back to the Flute and Tankard, a new addition to the GBG, a nice little pub, and a welcome addition to what is, a decent ale scene in Cardiff. The Hop Bunker is one of those must visit places, a place where the entrance is more akin to a reception to an office block. 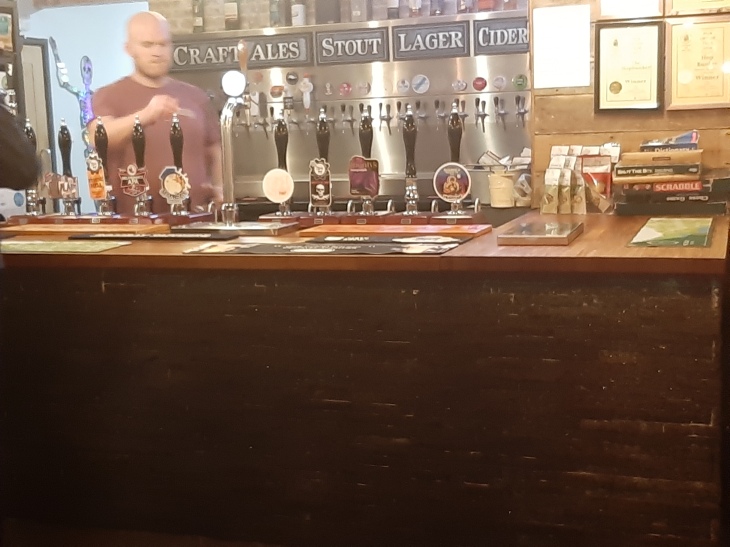 “But then you get this range”

Cardiff is a city where there’s a good selection of good pubs within a small radius. Tiny Rebel was where Steve, Jinksy, Ian and Aida had landed, and is also the tap, for the brewery with the same name it brews some interesting beers, one of its signature beers Cwtch won Camra beer of the year a few years ago. It went round that Jeff was in the City Arms, so we decamped to there. I mentioned the importance of what Cardiff meant to me as I chatted to him, and he remembered. Remembering saying to Carol how surprised they were to see me so soon after my accident. I’m not a person who believes he makes much of an impression on people, not charismatic like Spoons and Badge, or gregarious like Nat Peters and Ian. At best, I link people, involve people, and I certainly wouldn’t call it any kind of talent or quality. Just hearing Jeff saying that he remembered seeing me at Cardiff, made me feel humble. Taxis were booked, and it was to the ground. 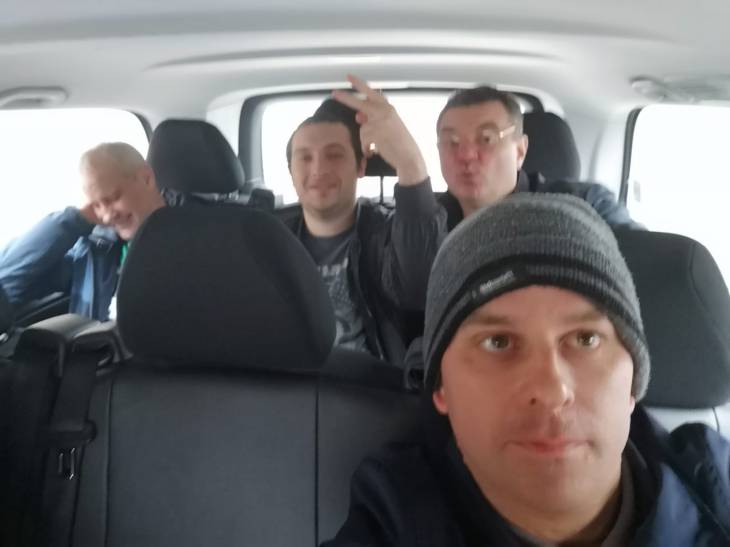 I’d like to pretend that I remember the whole of the game, but I didn’t, I do remember bits, but not a lot, not enough to make an honest comment on the game. In reality, I hadn’t got my timings right all day, if I hadn’t been following the rest from pub to pub, I was trying to race my drink to keep up. Like I’ve said, I get one day a week, if I’m lucky, to actually talk to people, and I do tend to shake the living daylights out of the opportunity, so hands up in the air, the alcohol had got the better of me. As I’m writing this, I don’t even know how I was admitted to the ground, of course I remember getting in, but I should’ve been refused entry. That admission to the ground was not only after kickoff, (As per usual) but after Blues had taken the lead. All I can remember about the game, is that Cardiff equalised, went in front, stayed in front. There were a couple of dismissals, one for each side, and I remember Blues getting another goal, though I didn’t realise at the time, how good a goal it was, and that was it really. 4:2. So if you want a better description of what happened, search for some proper journalism on the game.

The Landsdown is actually my favourite pub in Cardiff, maybe not the best, but my favourite. It’s a locals local and keeps a good range well. I was going to go to a micro pub nearby, but got comfortable, had it not been for having to get the train home, chances are, I would have stayed in there until the money ran out. So that was it, I hadn’t so much exorcised that first game back, as celebrated it. I’m rebellious by nature, stubborn, belligerent, I get it from both parents. Subliminally, I’d decided to have a blast from the past, a return to youth, almost to the point of self destruct. Like being an away fan in a home only pub. I had loved the idea of being English in the capital of Wales, had Wales got through their semi final. It’s possibly why I like the Landsdown, a proper Welsh pub, a Cardiff City pub. I’ve come a long way from discharging myself from hospital, not wanting to sign myself off from work, determined to defy what the consultants were saying. Tell me I can’t do something, but not why, I will attempt to do it, tell me I can, or I should, and I won’t bother, regardless of whether it will benefit me. Independent from conformity, living on the edge, so much more interesting and entertaining.