On the bus into town, my phone buzzed, one of the WhatsApp group posted that their train had been cancelled, I was hoping that maybe it was one that they’d be catching into town, 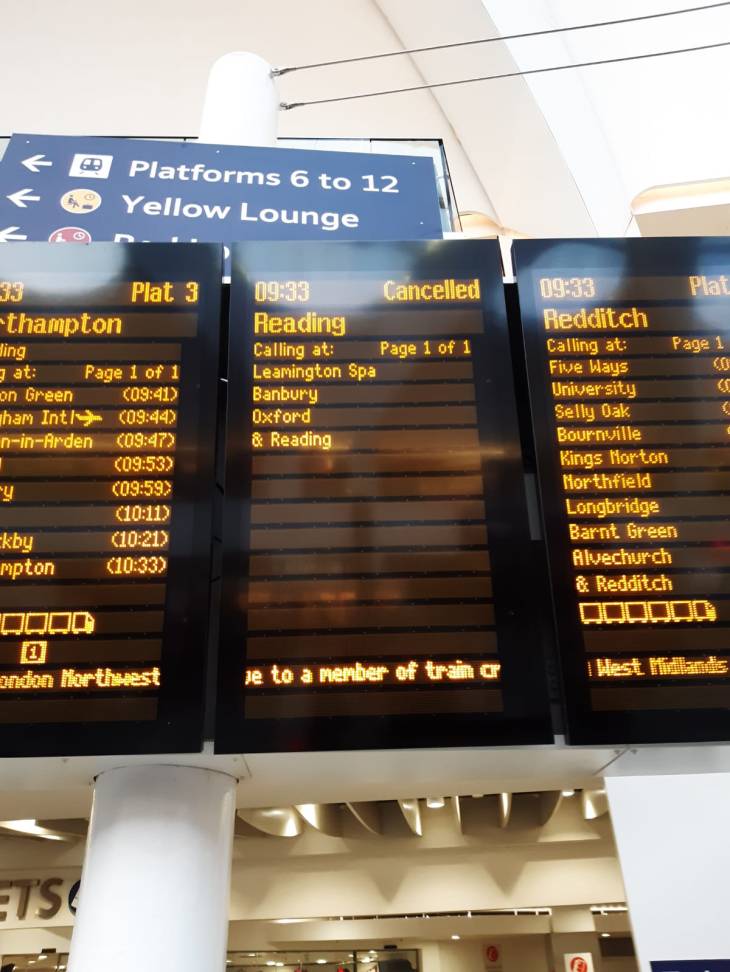 “Nope, I’d have been so lucky”

Our train system in this country is so fractured, that they’ve set up a school desk type information station to help with these situations at New Street, and they’ve had to do this, because these situations are more than a regular occurrence, it’s got to the point that you almost expect problems, it’s got to the stage that the people on the desk are ready for them, and I was pointed onto the 09:04 to Bournemouth, I wasn’t the only one to have to do this, but having prior experience, and ‘inside knowledge’, thanks to Darryl, I made for unreserved coach ‘c’, and managed to get a seat without too much effort. Headphones jammed in, I relaxed and spent the journey looking out of the window at rain saturated fields, doesn’t seem to matter where you go in the country at the moment, if the terrain is flat, it’s covered by water. Touching down in Reading, I headed for the Castle Tap, where I met up with Steve.

We chatted mainly about football, including the Trevor Francis biography I’d borrowed off Ian, I know biographies can be dry, and don’t tend to reveal the really juicy stuff you’d heard rumours of, and like with every biography that’s ever been written on someone not yet deceased, showed him in a good light, but I’d still enjoyed it, and reading in between the lines, two things came across to me, the deep love he had for his late wife, and the difficult working relationship he’d had with the powers that be at Blues at the time, a band of people that I’ve learnt to despise. Even now, I can’t watch Karren Brady, or whatever her convoluted title is, without turning the television over, as I just can’t afford to replace it, and I feel a compulsion to put my foot through the screen. By the time we’d got to the Alehouse, the rest had touched down, including Jeff, John and another Spotted Dog regular that I haven’t properly managed to talk to yet, Andy and Moz came in too. With German markets everywhere you go at this time of year, it’s understandable that the talk is of the January transfer window, and speculation as to who Blues can bring in, not what we need to bring in, that’s blindingly obvious. It’s like kids writing their Christmas list really, what (or who) we want, and what (or who) we’ll get, will be two different things. Spoons and JK went off to the Nag’s Head, me, Badge, Steve and Ade, decided on the Allied Arms instead, pitching up in the heated garden.

Although the jukebox had been out of order, the piped music wasn’t terrible, and had been fed outside, the next place, Butler, is a new addition to the GBG, it’s where we caught up with Spoons and JK, before heading back to Greyfriars, Greyfriars is absolutely perfect for where the special buses that are laid on to transport fans to the Madjeski, go from, it does a great range of ale, and isn’t frequented by the usual Carling brigade. As I’ve mentioned many times before, and no doubt, will mention again, I absolutely abhor out of town grounds, possibly only Brighton’s ground out at Falmer is bearable, and that’s only because you can get the train, they lay on extra trains, and the train fare is incorporated into the match ticket, it’s still miles away from the centre of Brighton, and so, not exonerated.

The Reading ground is a soulless place, so much so, that if Blues were to do the same, building an identity kit style stadium out by the NEC, which has been touted, albeit a couple of decades ago, I’d stop going. The atmosphere is bad enough at St Andrews these days, without making the match day experience even worse. The game may not have been as sterile as the last game of last season at the Madjeski, but it wasn’t exactly brilliant, in fact, it only really sparked into life, towards the end of the first half, when Blues took the lead, our ex defender and captain Morrison helping out Bellingham, by heavily deflecting his shot into the net, me and the 2,000 travelling Bluenoses, didn’t care who or how, we went ballistic, that fuzzy feeling didn’t last very though, as Reading equalised a couple of minutes later, and on the brink of halftime. 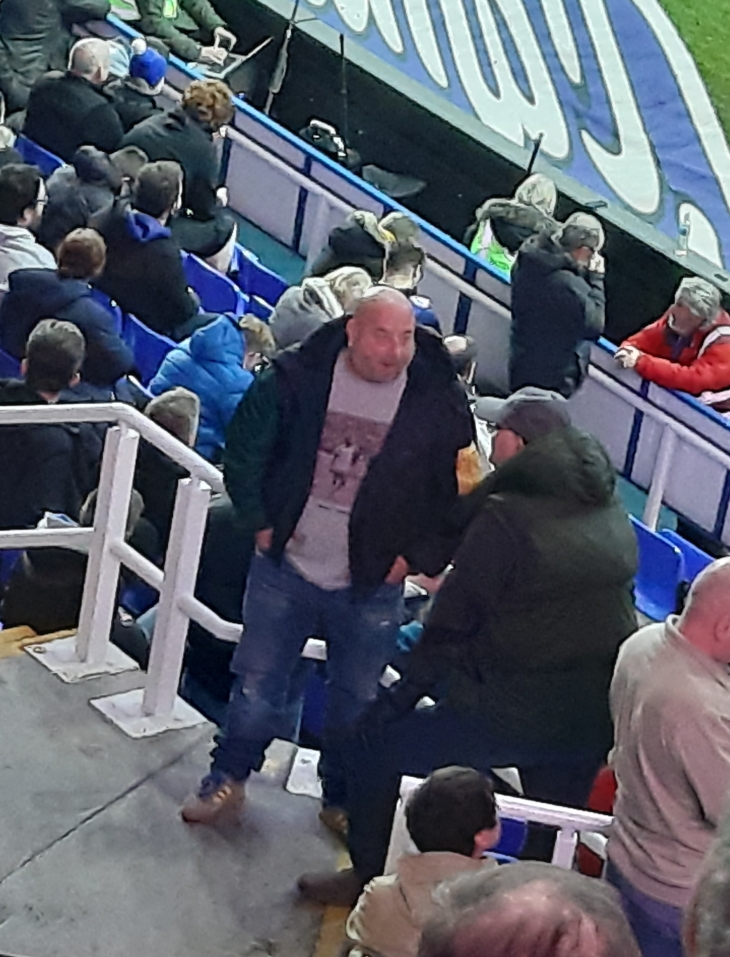 “I bet his crocodile wasn’t cancelled”

After chatting to Andy and Scholy, I spotted Steve from work, apparently he’d said hello to me at Cardiff, but as I hadn’t been in any fit state, I couldn’t remember when he remarked on it back at work. I was determined that I was going to show him that I wasn’t as bad as I had been that day, and spent the rest of the game with him, his missus and lad. The second half was so much better than the first, with both teams carrying on from the end of the first. We retook the lead with a fantastically struck free kick from Jeremie Bela. Blues don’t score many goals from free kicks from outside the area, so celebrations were more frenzied than usual, when it comes to shooting opportunities from free kicks, we’d grown more accustomed to casualties high up in the stands, than seeing the opposition net bulging, after the celebrations had died down, replaced by utter disbelief, many a Bluenose were seen to be physically pinching themselves, I doubt we’ll score another this season, but expectations will be be raised, instead of the standard taking cover positions. Reading pressed to get a second equaliser, seemingly getting closer and closer with every attack, but then we broke away, Gimenez played a one two with agent Morrison, and made it 3:1. We’d got ourselves breathing space. Thing is with Blues, they never let you give up on them, and they never let you rest on your laurels, just as you’re kicking your shoes off to replace them with slippers, sparking up a big fat cigar, they give away a goal to make things anxious, the shoes get put back on, and the cigar gets extinguished. It may have been the last bit of added time, but when your backs are against the wall, each minute feels like half an hour. The final whistle brought a collective sigh of relief, and a happy contentment.

Out of town grounds are surrounded by sprawling carparks, Readings is no different, fans that don’t go to a game in their private little tin box, catch whatever service that is laid on to whatever suburb they live in, these services are always the closest to the ground, the rest of us that head back into town, are an afterthought, our buses go from a stop furthest away from the ground, or they had done previously, they’d moved the stop and not bothered to tell anyone. I found Badge and Ade waiting at the new stop, along with 3 bus loads, only one bus had come back from its first journey, we managed to get on it, and stood all the way back into town, Badge went and got the next train back to Brum, me and Ade had an hour till our booked one, so we first went back to the Alehouse for a half, then back to Greyfriars for a half, before we got the train back home. Although we’d won, and there are some decent pubs in the centre of town, I’m not a huge fan of the place, and getting to and from the ground is something I never relish. At least we didn’t get drawn away against them in the F.A.Cup, so we shouldn’t have to go there again until next season.