Both Jinksy and Darryl were tied to work, a particular Hell I can put to the back of my mind until 20/20 vision time. I was however, an hour later than the rest, with heading up to Humberside, I can only imagine that it was cheaper going an hour later, as the reason why the rest had gone up on the previous train, was to take in the real ale bar at Doncaster station, somewhere I’ve been meaning to do, they graciously asked me if I wanted a takeout for the connection to Hull, something I was only too happy to take them up on, whilst teaming up with them, Spoons, JK, Steve and a newly National executive for the RMT, elected Ian, touching down in Hull, we salomed our way through all the Christmas party pavement pizzas, including something that resembled an ingested and regurgitated tin of magnolia paint, (No, I’m not going to say something like it must’ve been emulsional for the person, that would be too easy, and not funny anyway) We made it to the Hop and Vine, a subterranean place that you could easily miss, even after visiting a couple of times. Billie Holiday filled the air, a form of music that I appreciate more and more, the older I get, although this was changed for an 80s compilation, Spoons was happy, he’s quite partial to that period of time, and unashamed to admit it too. 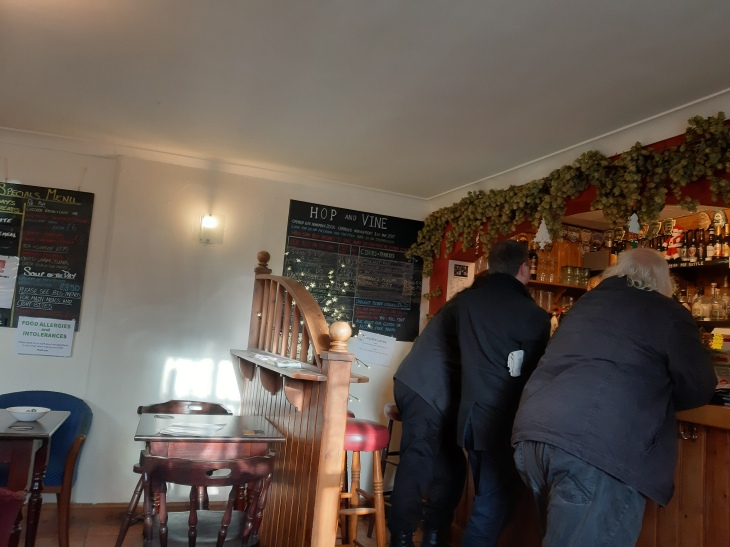 “Hard to find, but good to find”

We moved on to the old town in Hull, more Xmas party pavement pizzas, 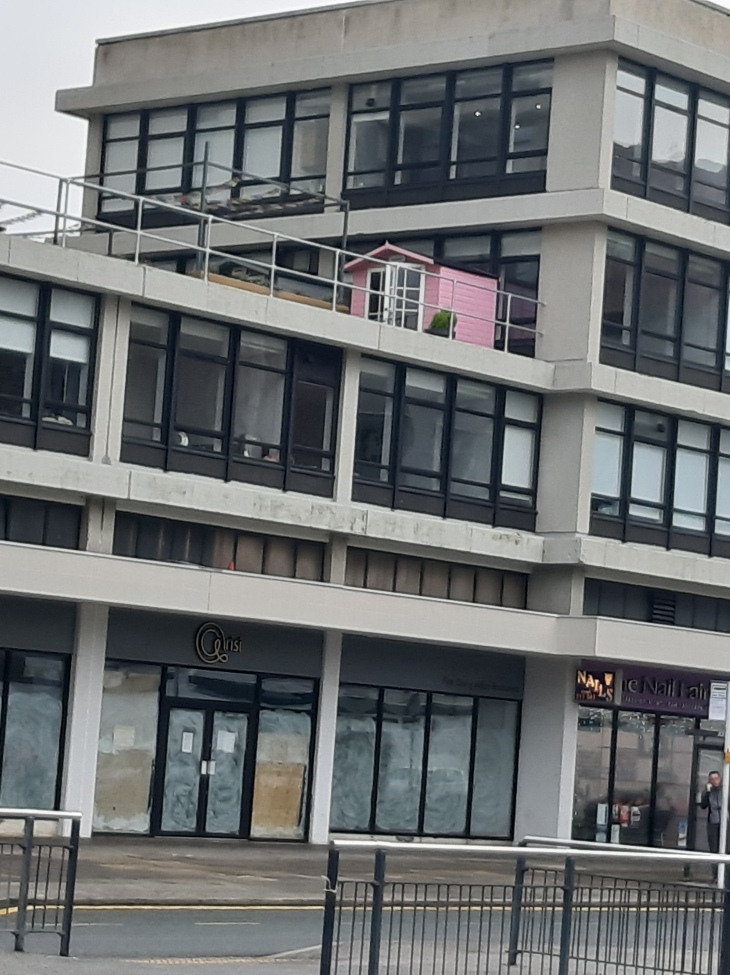 “And a strangely placed, and bizarrely coloured shed. Didn’t see a greenhouse”

The William Hawkes was first, a brilliant place, with a decor that needs to be seen to be appreciated, as it doesn’t matter how many photos you take, they’ll never do the place justice, you really need to see it for yourself. 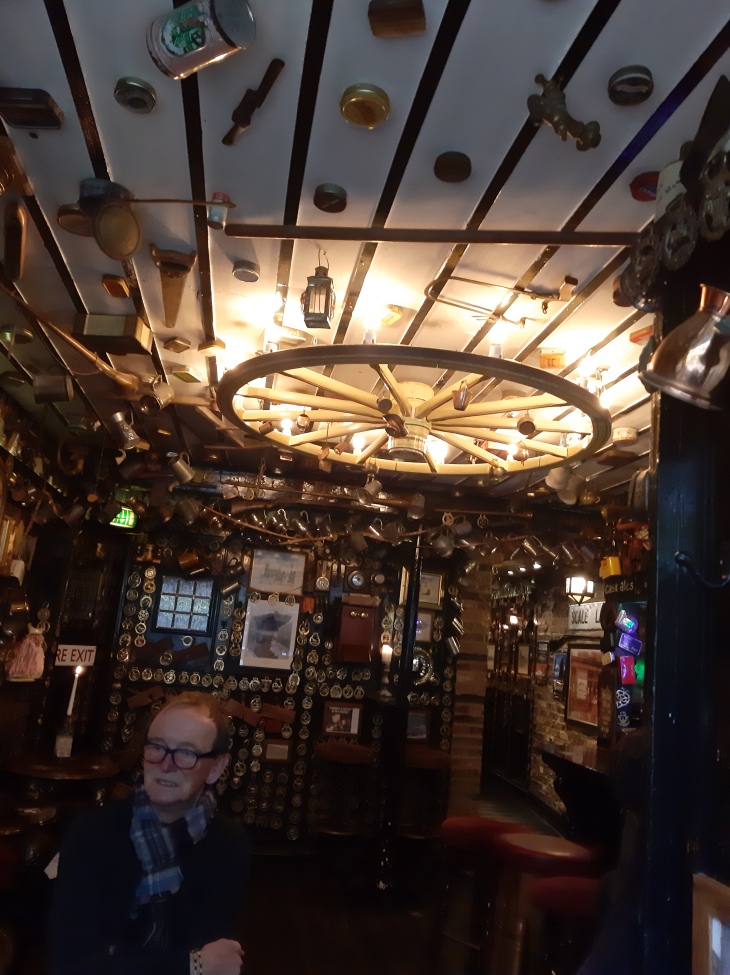 “Even a video wouldn’t do it justice”

There’s a couple of pubs in Hull that have some brilliant spoof adverts in the toilets, to the point of being conversation pieces, 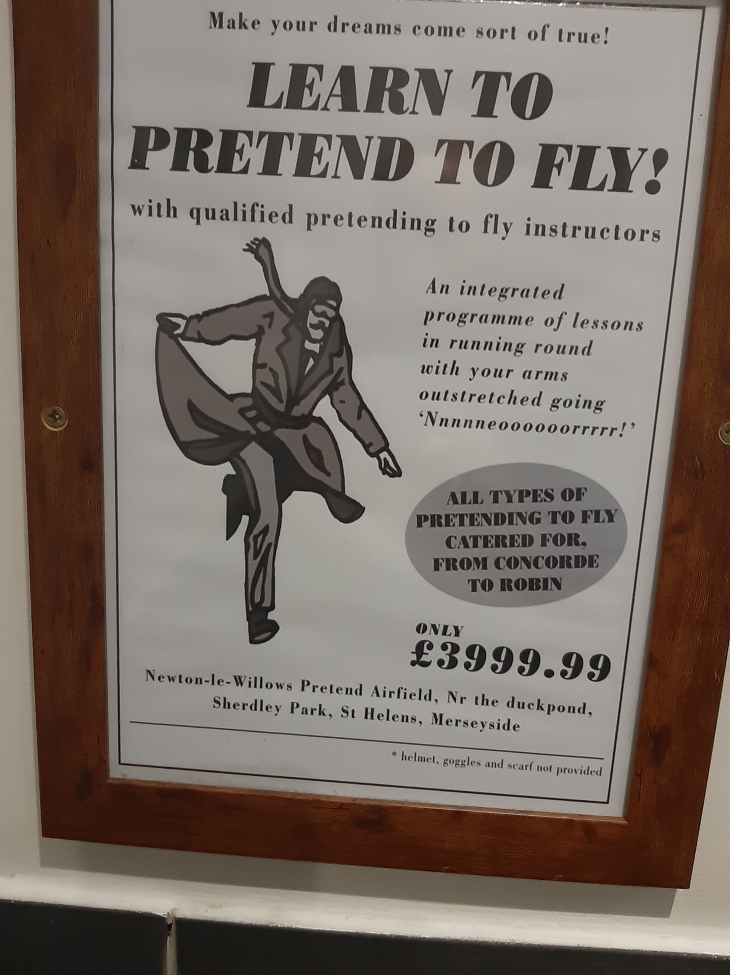 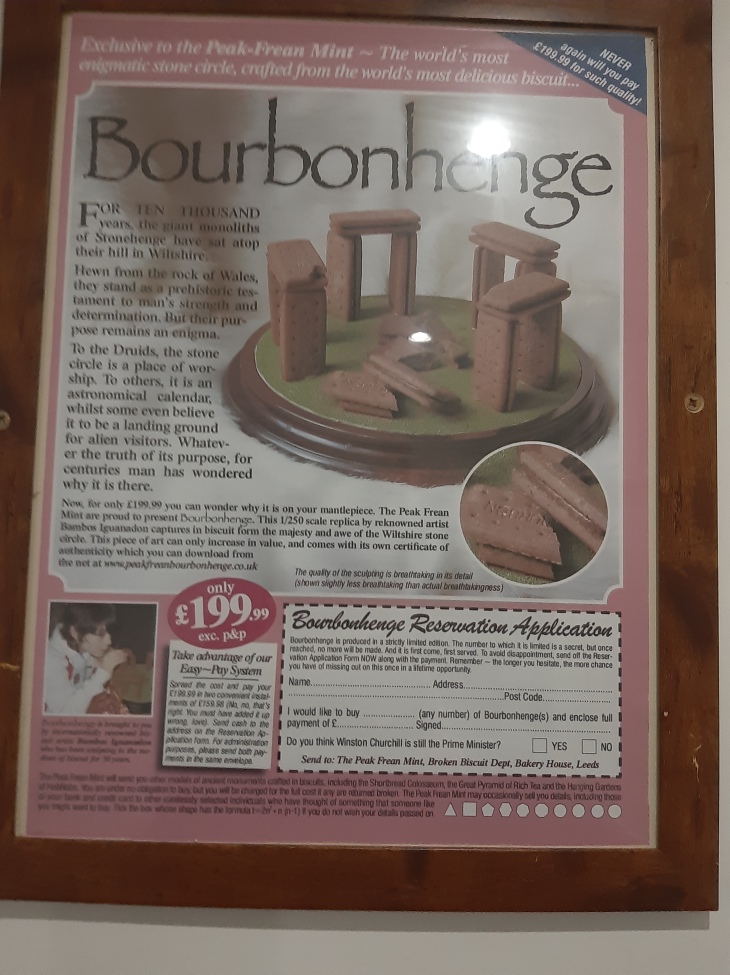 The next place, Fretwells, was a new one for me, and virtually next door, it used to be a printer’s, and they have printing memorabilia on the walls. 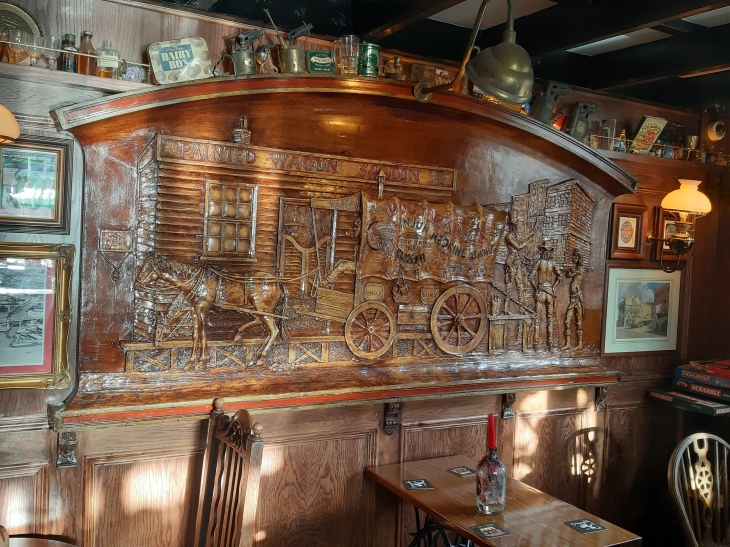 “And also this rather impressive freeze”

We then got a taxi, train, bus, plane and then walked for 3 days to the next place, the Lion and Key. It’s roughly 15 feet from door to door, definitely no more, but then most of the old town of Hull is like that. We did, however, actually need to go a few streets to the Taphouse, a much more hip and trendy type of place, a first for me, (no, not the hip and trendy bit, I’ve never been that) 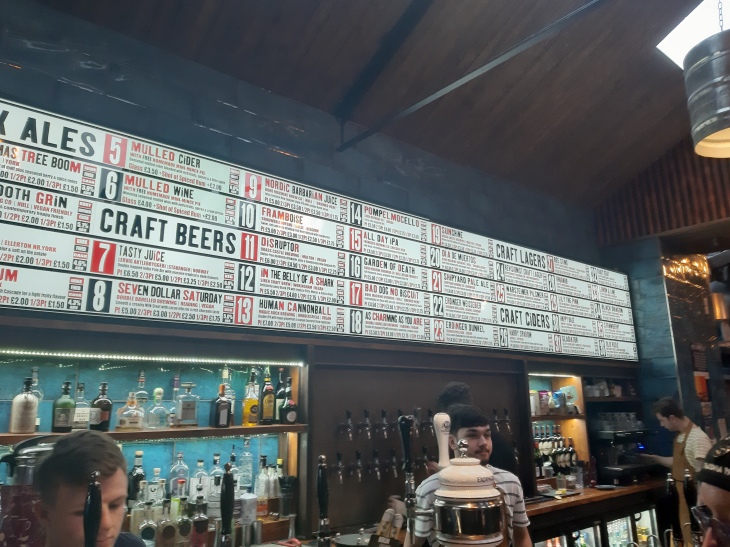 “Now this is Christmas, well it is for me”

We decided to go alfresco, and sat outside and chatted, we talk about a whole range of different things when we’re out together, not just football and beer. On this occasion we got on to genealogy, and how much we knew about where our ancestors had lived and came from. My Mother’s side of the family have mainly been based round Shropshire, but as for my Dad’s side, I don’t know. My father died when I was ridiculously young, so was never able to quiz him about his bloodline. I know they moved to Ward End from Saltley, but before that, I have no idea. We walked to a taxi rank, (no, we weren’t just going to the pub next door) grabbing a couple of taxis to the ground.

I said hello to Martin before spotting Jeff, I joined him to watch the proceedings unfold. Clotet had tinkered again, moving Bellingham out wide. Whether that effected Sunjic, I couldn’t tell you. Maybe he was just going to have a bad game, only human and all that, but he definitely wasn’t at the races. The team spirit wasn’t at its usual level, we weren’t playing well, getting opened up through the middle, when we did get possession, (it wasn’t backs to the wall stuff by any means though) it was breaking down as we approached the penalty area, as usual, there wasn’t the outlet that our play needed, no striker that was making those late, intelligent runs, no defence turning that midfielder’s can play passes to. For that reason, I can understand the impatience of some, those wishing for the long ball game, but really, it wouldn’t matter what system we play, we haven’t got goalscorers at the club, we haven’t even got a goalscorer, let alone scorers. Our predicament was exasperated on the cusp of halftime, as Hull took the lead with a near post header from a corner. At least Villa were losing too. Hull sat back, allowing us even more possession, maybe it’s the lack of a goalscorer that is sapping the team spirit, maybe it’s causing splits in the dressing room, it was exploited by Hull who grabbed a break away goal to seal the points, we had a gilt edged chance to pull it back, but instead of the ball making the net bulge, the header just led to a goal kick restart. A bovine posterior being struck by the southern states favourite musical instrument, seems impossible. Barn doors won’t need repairing anytime soon. I was finished for the day, going to the toilet before I left the ground, Hull made it 3:0 to send me on my way. We’ve played some of the most stylish football I’ve seen Blues play under Clotet, but the feeling that we’re going to suffer another knee jerk dismissal and an appointment of a long ball merchant with the hope that it’ll produce consistent wins, is just round the corner, to send me round the bend and over the edge, is growing.

I walked away from the ground, trying  to ignore the disappointment of losing, while putting a philosophic spin on it. It’s what we do, or should do, it is, after all, only a game, a game that is supposed to be entertainment, results shouldn’t be the be all, and end all, yes, it’s always nice to win, but it shouldn’t be relied on to lift us out of mundane existence, only the individual can do that. The philosophical spin on this one was easy, we never do well at Hull, it was just another day at the office, a win there has less chance of happening than a bloke with a white beard, dressed in red, flying through the night sky in a sleigh, pulled by a team of reindeer, led by one with a bright crimson snout. I’d enough time to go and find the White Hart and have a beer there before heading back for the train. The White Hart had reopened since our last trip, and has made it into the GBG, 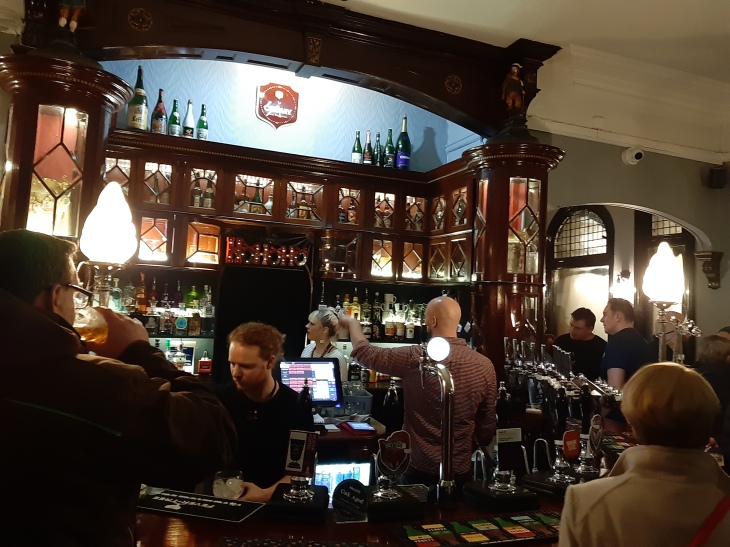 Not that Hull needed another addition to a really good ale scene, the Hart is definitely a welcome addition. Hull is rapidly climbing the list of must visit places for an ale trail. It’s got an extensive range of good pubs, with some good beer. We’ll probably lose again next season, but I for one, will look forward to a trip back up there. Leaving the pub, I’d got just enough time to get something to eat for the train, and although the train was late arriving at Sheffield, so was my connection to Brum, so still made it back ok. Merry Christmas.