The fixture gods had seen fit to give us an away game for Boxing day, but if any of us ale trailers could’ve picked a game that they didn’t mind missing, then it was Blackburn, the Watford of the north, a real ale desert. Us ale trailers travel by public transport, we might get a taxi to get from a town or city centre to a ground, but that’s as close as we tend to get to private transport, let alone official. There’s no trains on a Boxing day, time to choose a local ground hop, with a vastly reduced bus service, and proper grass pitches being invaded by herds of wart hogs, that choice was limited, hence this one. As usual, Darryl had done his research, and had kindly sent me a link for the timetables, I got the bus into town, Jinksy had settled for ticking this one off too, and he joined me in the Square Peg for a swift half, before we caught the X51 to Walsall, felt strange going back up the same road that I’d only just been on. Darryl had made his way to the stop at the Alexandra stadium, and he joined us. I hadn’t been to Walsall since I signed up for the agency that I secured the job I’ve got now through, Walsall hadn’t changed. We got off at the bottom of the road that the agency is on, fleetingly, I wondered if I’d ever need to sign up again. I’d never been in St Matthews Hall Wetherspoons, I’m not a Wetherspoons ticker by any means, but I have been in a fair few now. Jinksy had breakfast, and Ian Lake joined us. They’d got photos of local celebrities on the wall, and I surprised to see Sue Nicholls amongst them, not because I didn’t feel she was famous enough, just that I didn’t realise she was from Walsall, mind you, I didn’t get where I am today without not knowing stuff. When we got in the Black Country Arms, the cricket was on, something I’d been more than happy to watch, but it was turned over for the Premier League game that was being televised by Sky, after the initial look at Tottenham’s new ground, I instantly became bored, once the novelty has worn off, and tickets are easier to get, I’ll tick it off, but there’s no rush. The game itself, I really wasn’t interested in, I’d have preferred to watch the cricket, it became background music. 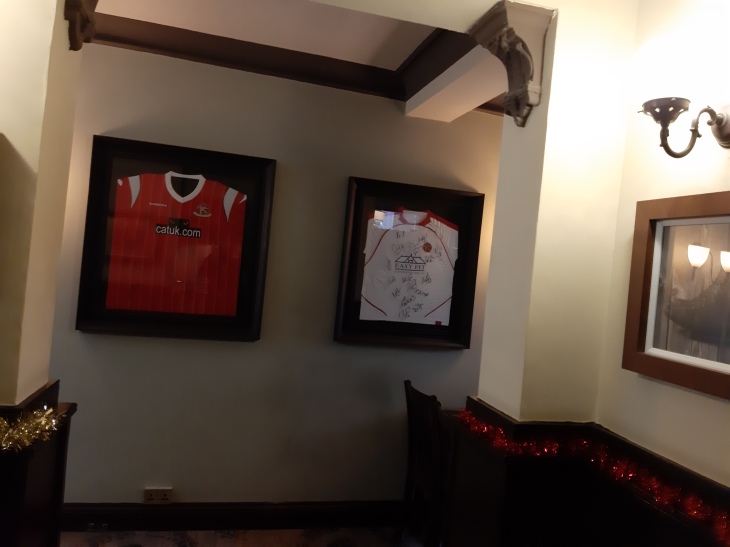 Had it been a normal Saturday, instead of feeling a bit like a Saturday, we would’ve done more pubs, they would’ve been open, we only moved on to The Victoria before the game, a proper back street boozer, the type where for music, the radio is piped round the pub, and the television is showing Horse racing. Most of the Black Country is rough and ready, no pretensions, no heirs and graces, but it means prices are affordable, a roast beef cob and a pint of well kept real ale for less than a fiver. Darryl ordered a taxi to get us to the ground.

A bloke I used to work with, played for Walsall in a previous life, his career cut short through a reoccurring injury to his knee, he went on to manage Rushall Olympic, but except for knowing of the club beforehand, I knew nothing about it. The other three went in the club house, I had a look in the club shop, Non-League clubs are sometimes a good source for old programmes, the one at Rushall had a selection from two clubs, Wolves, which I could understand, but also Shrewsbury Town, which I couldn’t. I went through the pile, but didn’t come across any Blues ones. Disappointed, I took a slow walk round the ground to the far end. 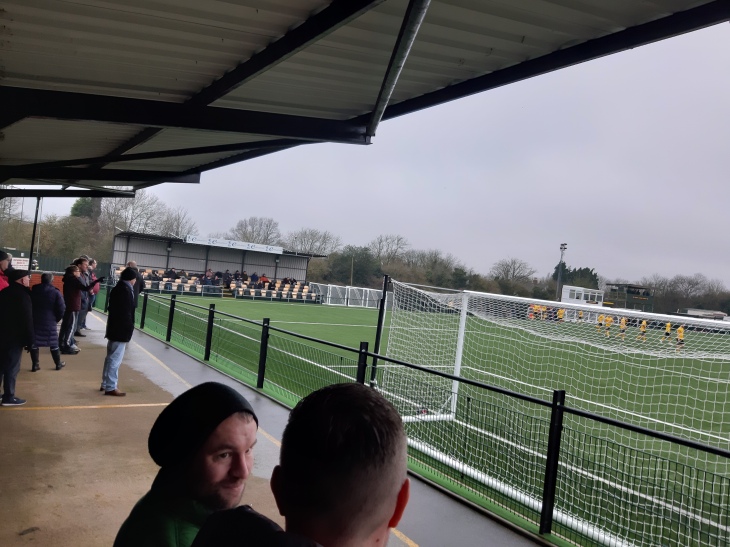 The rest joined me, complete with their plastic glasses of Theakston’s, as beer goes, only a smidgen better than Doombar, knowing that it was the only choice in the clubhouse was the reason why I hadn’t bothered. Hednesford started the better, and went on to be on top for the rest of the half, a goal seemed to be inevitable, but they were forever taking an extra touch, or even just taking a touch, when they really could’ve moved the ball quicker, taken their chances quicker, it enabled Rushall to crowd Hednesford out, halftime and instead of 0:0, the away club should’ve been at least 2 goals to the good. We switched ends at the interval, the other three going back in the club to have another pint and watch the scores, with Hearts having already been beaten at home by the Hobos, and Clotet dropping both Sunjic and Bellingham to the bench for Davis and Gary Gardner, I wasn’t expecting anything from Blues anyway, it hadn’t helped that Chorley were losing to Wrexham either. Almost immediately after the restart, The Pics broke forward, catching The Pitmen out, Hednesford’s keeper was adjudged to have brought the on rushing Rushall forward down, the resulting penalty was dispatched to give the Pics the lead. Except for the score, normal service was resumed, and Hednesford not only sort to get back to parity, but find a winner, something that was made easier when a second booking, the last for so called simulation, reduced the home side to 10. Olympic battled to preserve their lead, even with a succession of corners, (I’m sure the most I’ve ever seen) the away side couldn’t force an equaliser. Blues in the meantime, had gone 1:0 down, equalised, and by the sound of it, been attritional. With added time beckoning, Darryl ordered another taxi, and it arrived, just as the final whistle was blown. I can’t say I’ll be returning anytime soon for a game, but was glad that I’d ticked it off, and I hadn’t missed much with Blues.

We got dropped off back at the Black Country Arms. The Manchester United v Newcastle United game was starting, a bloke on a stool at the bar moaned about it, I noticed the sleeves of the football shirt he’d got on underneath his body warmer, I wasn’t going to engage him in conversation, too late, he proudly showed off his Arsenal top, they’d played at Bournemouth, unless he’d had access to a time machine, he wouldn’t have been to the game. I feel a fraud wearing colours if I’m not at a game, he tried to vindicate it by saying that he was from Birmingham, not Walsall, we were all Blues fans, and go to games, someone mentioned supporting his local team, I reeled off all the league clubs in the West Midlands he could’ve supported, he countered by claiming he’d supported Arsenal for 22 years, so after the very recent George Graham years of winning trophies, he became a fan in Arsene Wenger’s first full season when they won the Premier League and FA Cup, he must’ve realised that he’d set himself up for ridicule, as he drank up and left. I have very little time for people who never make the effort to go and see the club they claim to support, yet will display colours and lord it over supporters of a local club that do actually go and watch them. They’re 10 a penny these armchair glory hunters, their opinion worth absolutely nothing. Lapsed fans I can take, start talking to them, they will recall games, grounds, players and with a heavy sigh, will offer the reason why they’re lapsed, but these fly by nights, I try not to even talk to them, switching the conversation or just make my excuses and move away, as they really really annoy me. Darryl was on his toes to go and get the last X51, I wasn’t in the mood to rush my pint down, nor were the other two. We did drink up though, and walked down to the bus station, saying farewell to Ian, me and Jinksy caught a normal 51 service, I got off at the stop I usually use to catch the bus into town.