It was, as per usual for this time of year, a sparsely populated bus into town, the shops hadn’t opened yet, and so all the bargain hunters were still in bed, it was only the shop assistants who were going to have to serve them, and this idiot on it. The train was just as sparse, but then that was more to be expected too. As the train left Brum, I text my Neph David, his wake up alarm, the New Year’s honours list had been revealed, the tradition of people on it, that from the outside, didn’t deserve to be awarded, hadn’t been broken, Steve took to WhatsApp in disgust. Touchdown Manchester, I went in the Piccadilly Tavern to kill time, before meeting David off his train, a text told me he’d fallen foul of a migraine, I hadn’t realised, I had that affect on people. It’s been some years since I’ve had a migraine, and I hope it’s at least double the same amount of time before I have another, he had my sympathy. The Marble Arch was just opening when I got there,

unfortunately though, yet again, no Chocolate Marble, perhaps the best beer of its type, much as the ornate place is beautifully preserved and the rest of the range is good, it’s with the hope, that that particular beer is on, that I head out to it. I headed back to the Smithfield Market Tavern, a hip and trendy type of place, and after the interior of the Marble Arch, a disappointment in terms of eye candy, but the beer is worth going in for, I’d got enough time to head for my favourite place in Manchester, The Grey Horse. 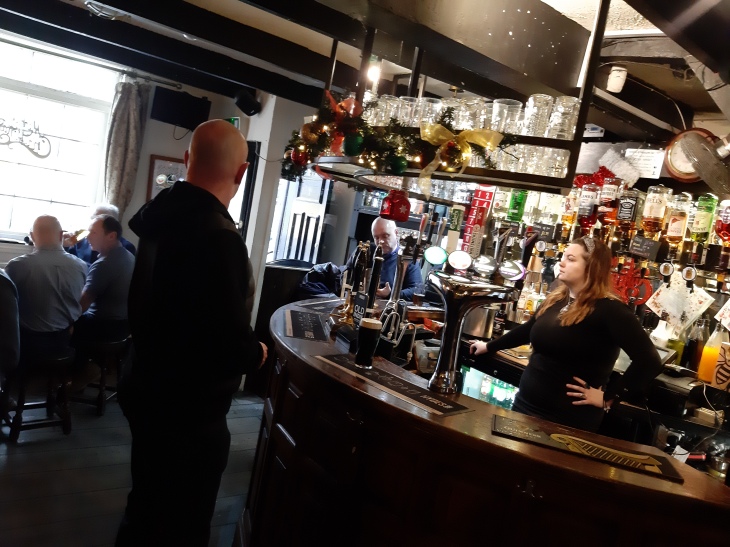 “Yes, that really is how big the bar is”

It’s not the best place in Manchester, for a start, I haven’t been to as many places as I would like, but up until now, my favourite, the place I feel most comfortable, a proper Manchester pub, even before the money arrived at the blue half, frequented in equal numbers by fans of both clubs, and always always friendly. A Hyde’s pub, and probably just down to the size of the bar, hardly ever serves any guest ales, but it’s rightly in the GBG in my humble opinion. I went round the corner into Piccadilly Gardens, and caught the tram, or Metrolink, to give it, its proper title, to Ashton under Lyne. I like trams, not quite trains but better than buses, slower than trains but faster than buses, but ultimately, like trains, feel more important, reliable. We, as a country and society, moan about our train system, and, there are improvements that could and should be made, but it’s a system that has had very little investment in it since all the acts of parliament led to it being built in the first place. Neglected by successive governments, up to the neglect shown by multiple franchises that are solely out to make today’s money, forget tomorrow. Not so with trams, my Mother, if she was still alive, would be sat there with that smug, ‘I told you so’ expression that she mastered so well, every time there was an article on the news about tram expansions, and there are many projects or plans for more going on around the country, well Mom, wherever you are, they’re not the trams you remember, but I still like them, and they make getting around places easier, here’s to more. Getting off in Ashton, I went on the market, no, no, don’t panic, I’ve not lost my mind….yet, I wasn’t indulging in sales shopping, the Ashton Tap House is, like a few micro pubs, especially oop north, situated on the market.

“Half a pound of mature cheese, (no, not this blog) and half a dozen eccles cakes please”

What a lovely little gem this place is, I’m a huge fan of little micro pubs in markets, would welcome one in the indoor market in Brum. They’re always ran by proper ale drinkers, for proper ale drinkers, but not a hipster in sight. I left myself with enough time to head to another new ground and thus, with my incredibly poor sense of direction, and that constant possibility of a wrong turn being taken, I ventured forth. Obviously dear reader, I didn’t pass up on that opportunity to take the wrong turn, and had to ask a friendly couple of locals directions, I got in the ground just after kickoff, too late to get a programme, as they’d all sold out, but they were handing out free team sheets, so I had one of them instead.

The ground is a proper old Non-League ground, more character than you can shake a stick at. 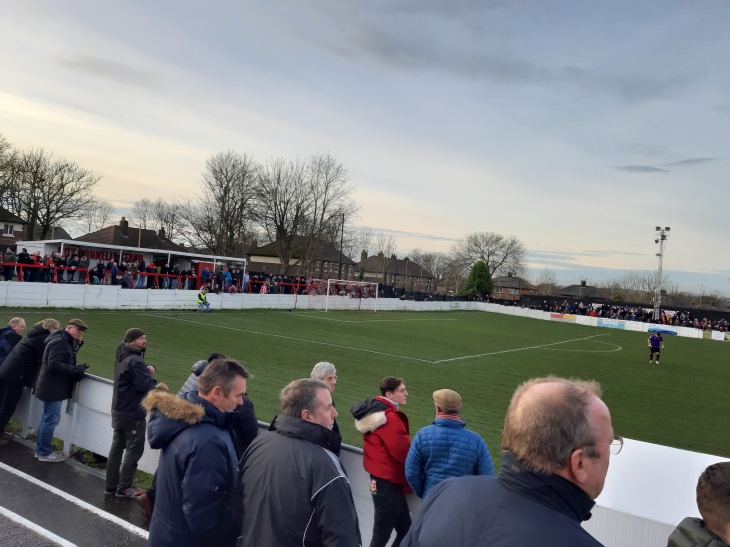 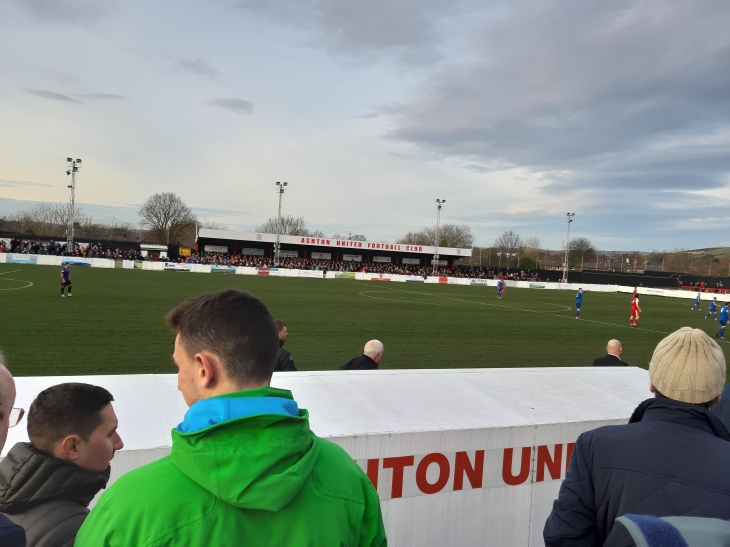 “FC fans were in in full voice as usual”

“And people wonder why I do Non-League football”

United, the Ashton version, should’ve gone 1:0 up, whilst I was waiting in the queue to get a burger, United, the new, and in my opinion, the better Manchester version, were struggling to get a grip of the game, by the time I’d bought my burger (Long queue), they’d managed it, and the game settled down to an equal contest. I know that the skill level isn’t as high in Non-League football, but because you find yourself appreciating the effort more, you’re less critical of mistakes, the players are part-time, they haven’t got the flash cars and houses to go with the lavish lifestyles, professionals have got, you feel more of an affinity with them. I don’t know what the beer was on offer, as word spread that it had run out. 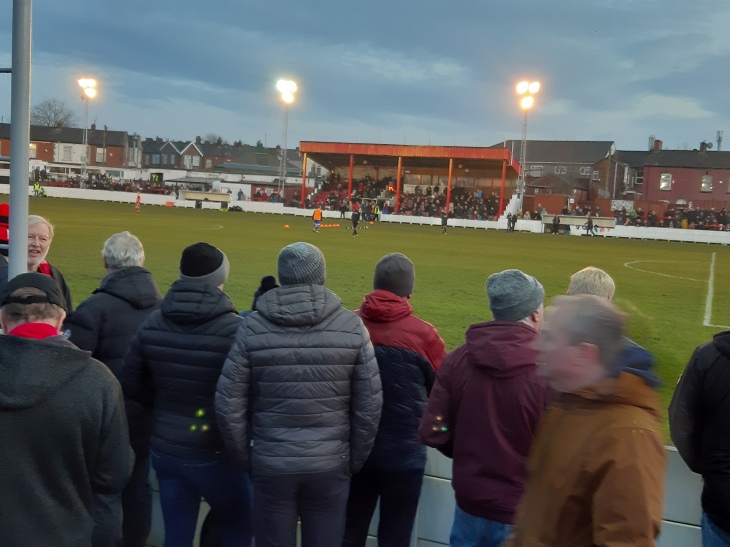 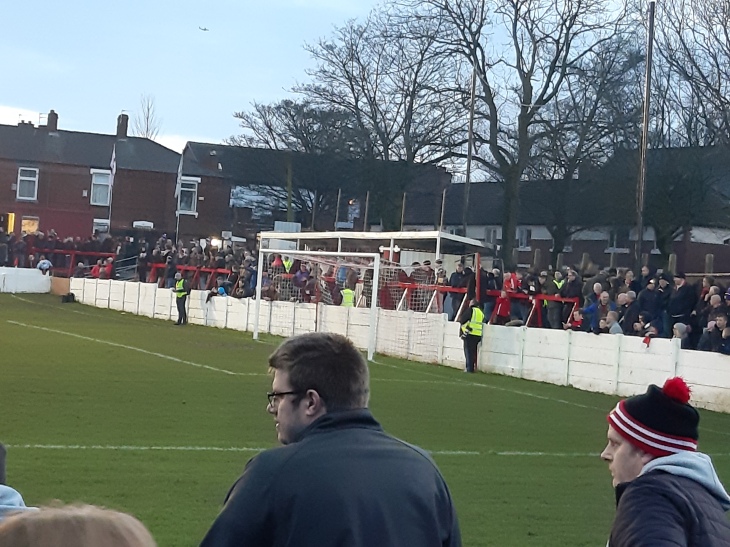 The deadlock was almost immediately broken into the second half, as FC United hit the bar, maybe the away team had been disgruntled by the news of the beer running out, as they seemed to be playing with more purpose, like a protest against the situation. It was only a matter of time before the tourist free Manchester United, took the lead, it came by way of a penalty. They could’ve doubled that lead, but for what looked like over excitement getting the better of the United striker and he got his feet tangled up as he was bearing down on goal, but instead of derision, he was applauded for the effort of getting as close as he did. As the game wore on, and the goal didn’t get added to, Ashton grew more confident going forward, the away defence more jittery. On 87, a good move down the Ashton right, led to an inviting cross into the centre of the box, 1;1. That was it then, a draw, well no, in true ‘Fergie style’ the aesthetically pleasing United, with none of the mega million advertising emblazoned on their shirts, (none at all by policy, as it happens) poured forward, getting a free kick right on the edge of the penalty area, resulting in the home side being reduced to 10 men, second booking, it was changed down, fed out to the left, crossed in first time, 1:2, Sir Alex would’ve been on the pitch celebrating. It was what the away team had deserved, and it sent the vast majority of the 1,500 crowd home happy. It’s the second time I’d watched FC United of Manchester, I’ve already ground hopped to Broadhurst Park, and I can honestly say, I can understand the appeal, the games involving them, have got that old school feel to them, and it’s not the just middle aged and pensioners that used to frequent the Stretford end either, it’s youngsters that have turned their backs on the commercial, cynical nature of the Premier League. I wonder how long before the Premier League bubble bursts, it has already for me.

I found my way back to the ring road ok, but without any signposts, negotiating it, proved a huge problem, my horrendous sense of direction, pushed me out of the way, taking over and followed anything that looked remotely like the centre of town, disregarding any doubts and queries as to whether it was the right way, I finally made it to something familiar, which is where that stupid, useless, sense of direction of mine, sloped off the other way. Whether it heard me shout after it, not to come back, I don’t know, I ducked into the Prince of Orange, before it could return. A Robinson’s owned place, that had obviously been refurbished, now all sparkly and plush, I could imagine it having a sticky carpet and a ground in stale smell. I like Robinson’s beer, Old Tom is legendary, but the very nice tasting burger that I’d had earlier at the ground when I was starving hungry, was at odds with my stomach, I could sense an argument brewing between them, the beer, although nice, was, instead of acting as a peacemaker, agitating both sides. I left the rest, and got the tram back to Piccadilly. I’d only a couple of minutes till the next train, but didn’t fancy my chances of getting a seat, so I waited for the next, getting on and finding a seat in comfort, headphones on, I drifted off to sleep. Getting up at New Street, I was expecting the stiffness of age to dissipate by the time I’d reached the top of the escalators, it didn’t, limping to the bus stop, it hadn’t vanished by the time I’d reached home, whichever position I’d fallen asleep in, hadn’t been compatible to my left leg, and it was complaining in the only way it knew how, with pain.