I dislike Luton Town, have done since the 80s, banning all away fans and a plastic pitch, saw to that. Even before the ban, it was a horrible ground, and you could never call it a stadium, that dislike has grown since the meagre allocation given  to us this season, if you’re a long term reader of this rubbish, then you’ll have gathered that I attend an awful lot of away games involving Blues, however, not enough to reach the criteria to be able to purchase one for Kenilworth road. So with a free Saturday, it did give me the opportunity to ground hop, I settled on Bromsgrove Sporting v Tamworth, in a previous life, I watched a FA Trophy tie between the then, Telford United and Bromsgrove Rovers, at the time, Rovers were in a lower league, but what surprised me, was the support that not only Rovers brought with them that day, there was a good 300 of them, and they were boisterous. Telford won, but I’d been impressed. Fast forward to another life of mine, and I’d became firm friends with a couple of Blues lads from Bromsgrove, turned out that the Rovers lot that game in Telford, had been made up of regulars at Blues, Albion and Vile, it explained the boisterous ness, I spent a few nights drinking round Bromsgrove back then, though I never bothered to go and watch a game there, both Telford and Bromsgrove have had their financial strife since, and they’ve both disbanded and reformed, the post fix Rovers morphed into Sporting. Fast forward to the present day, and such is life, I’ve lost touch with those lads, but the pull of a visit down memory lane was too great. Before getting the train, I had enough time for a pint in the Welly, though I did have to wait for them to open it up, I used to get the bus to Bromsgrove, touching down, I went in The Ladybird next to the station, I was hoping for that back street boozer feel to it, instead it had that new clinical feel to it, I’m not sure how, but I got chatting about global warming with the two young female bar staff, we were in total agreement over it, and not wishing to go preaching here, it’s very real, more real than a lot of people understand, but I’m lucky, I’ll be dead. The walk into the centre of town was longer than I was expecting, I couldn’t help thinking it was why Walshy always caught the bus to Brum, Pughey lived closer to the station, hence why he always caught the train, either way, it was definitely longer than I was expecting, I always used to catch the bus when I went there in that previous life. The Dog and Pheasant must be on what passes for nightlife in Bromsgrove, it’s got that ambiance about it, although the beer was kept well, it wouldn’t be a place I’d return to on a regular basis if I was an inhabitant of Bromsgrove, whereas the Little Ale House would be, a proper little micro pub, one of those unpretentious micro’s, ran by beer lovers, for beer lovers. 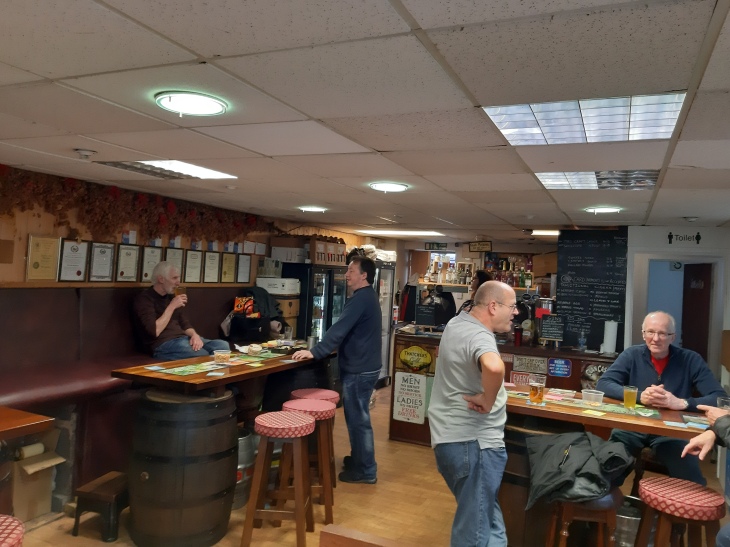 “Good beer, is all that mattered” 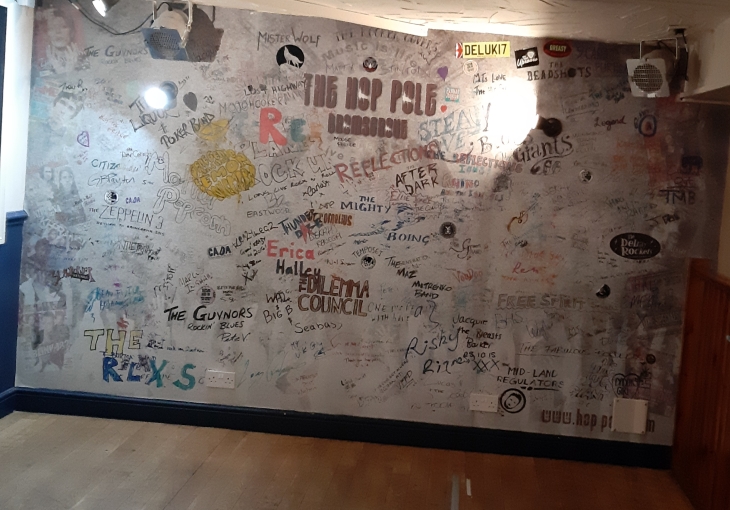 “Still a music venue though”

I got chatting to a couple of Blues fans, who’d also missed out on one of those golden Luton tickets, about the state of the ownership at Blues, at best, it’s sketchy due to the way the Chinese are secretive about their business, from the outside looking in, it looks like they aren’t singing from the same hymn sheet, that their objectives are mixed, the fans who I was talking to, gave me the impression that they weren’t stupid by any means, and certainly didn’t think that everything in the garden was rosey, but they also seemed more clueless to what’s going on behind the scenes than I am, which sums up a lot about Blues at the moment. I for one, have never felt this detached from Blues in the 40 years I’ve supported them, and I really don’t suppose I’m the only one, you’ve only got to notice the lack of atmosphere at a home game to realise that.

This was a top of the table clash, and a large contingent of Lambs fans were expected, so segregation was in use. 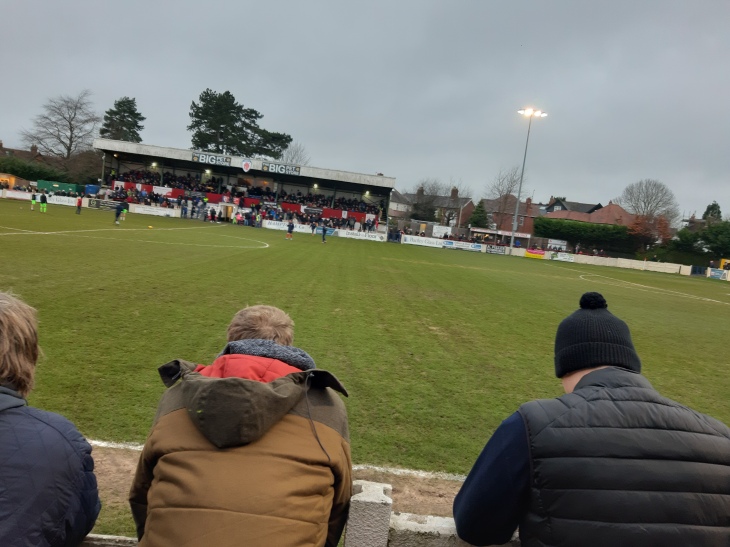 “Used to be the green and white of Rovers” 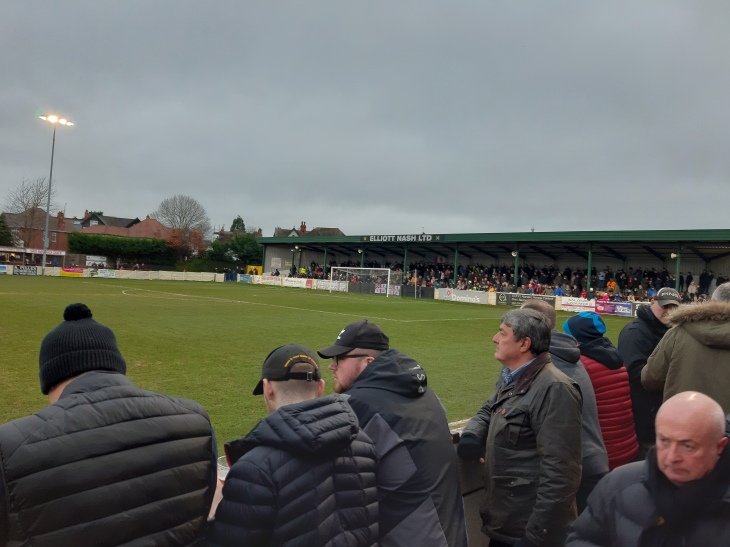 “Quite a big home end though” 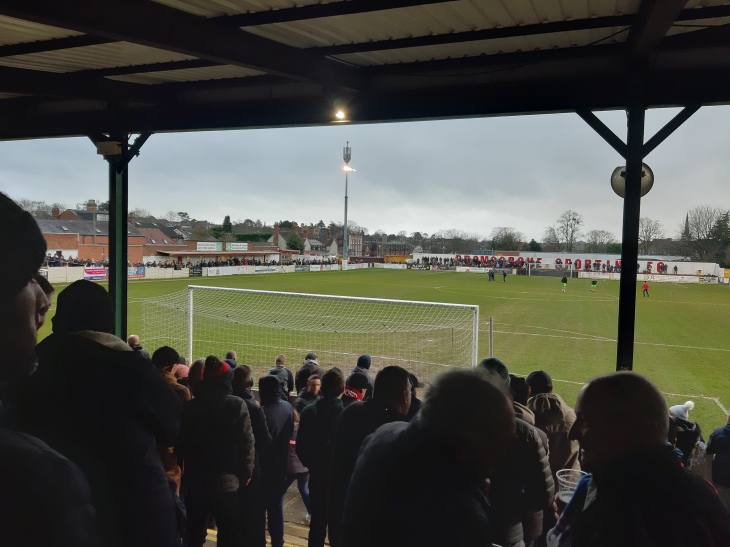 “But nothing much more”

Tamworth got a couple of 1 to 1s, that they should’ve put away, before a mad scramble in the Tamworth penalty area from the home side, led to just as mad a scrambled clearance, yet another 1 to 1 for the Lambs was missed, as the first half came to an end. 0:0, but the game should’ve brought at least a goal, and on balance of chances, it should’ve been for the away side. Second half and Tamworth got another 1 to 1 that they should’ve put away, and then as what happens in these situations, Rovers, I mean Sporting, took the lead. Now I said that the ground was segregated, however, whether the group of Tamworth fans had disregarded the stewards outside the ground and decided to go in the home end for the chance of a bit of aggravation, or thought they’d be safe, I don’t know, but the goal had blown their cover, and the group were surrounded by Bromsgrove’s Carling brigade, windmilling of punches were exchanged, the greater numbers winning out before the group of interlopers were escorted off by a combination of stewards and police. Back to the football, and Tamworth got their latest and final 1 to 1 chance, it also brought an absolute fantastic save from the Sporting keeper, I couldn’t recall a game, where one team had had as many 1 to 1s and not scored as Tamworth had, Bromsgrove were battling well, so much so, that their players were starting to go down with cramp, something I’d only ever seen in extra time, they held on though, and the effort had seen them replace the visitors at the top of the league. The majority of the 1,700+ crowd left happy.

I walked back to the station, and found out the train I would be catching, was going through Ast…, near to where I live, so I stayed on through New Street.