Even after a revitalising shower, I felt fragile, my body doesn’t react like it used to, I wasn’t hungover, my head was fine, but I did feel like I’d been run over by a steam roller, I checked out, (Although I could’ve easily spent the day watching trains arriving into Temple Meads, from my 5th floor room vantage point) and headed to the Knights Templar for breakfast and a pint, ironically the beer I had was Iron Brew, almost Irn Bru, the hangover cure of choice for most Scots. JK and Spoons were already in……Spoons, and I joined them at the next table, before they went off to catch the ferry to the first on the itinerary. I bought my train ticket, and with headphones jammed in, I caught the train to Weston Super Mare, touching down, I walked through the centre of Weston to The Regency, I had been to Weston before, but the most recent time, was over a decade ago, and I was more bothered about getting phone credit, so I could spend all my time texting another woman, instead of concentrating on the woman I was supposed to be with, as well as my surroundings, so everything was completely new to me. The Regency is your typical seaside pub feel, the range was all national signature beers, but well kept, the next place The Criterion, was more a locals place, it it was quite a way out of the centre. It was making use of the rugby internationals, whilst I was in there, a huge pot of homemade chilli was brought in, for the regulars to tuck into while they watched the games.

“I tucked in one of these instead, it was rude not to”

I got talking to an Irish bloke about football instead of rugby, and probably spent longer in there than I should’ve. I liked the place though, it had a comfy feel about it, definitely worth its entry in the GBG, definitely a place where I’d head to if I lived there, but I was off to….

“Pussy attention of a different kind”

Darryl had recommended this place, and it wasn’t to disappoint, the barrels set up on stillages, festival style, the owner had worked hard and imaginatively on the decor. 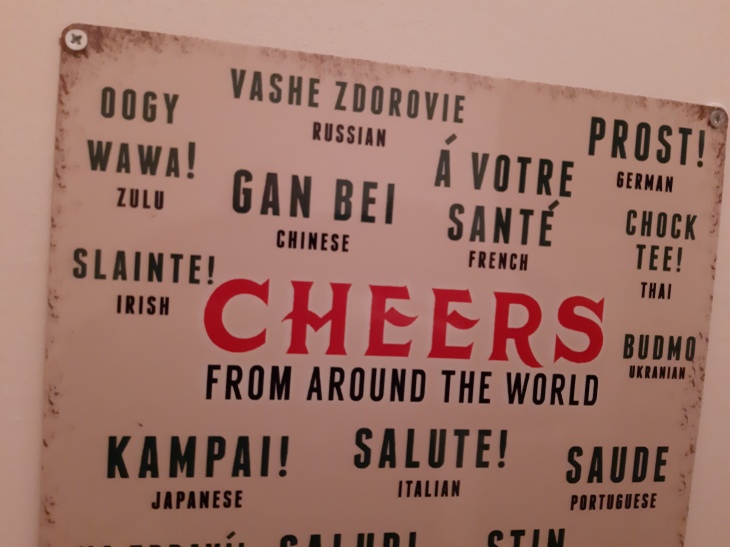 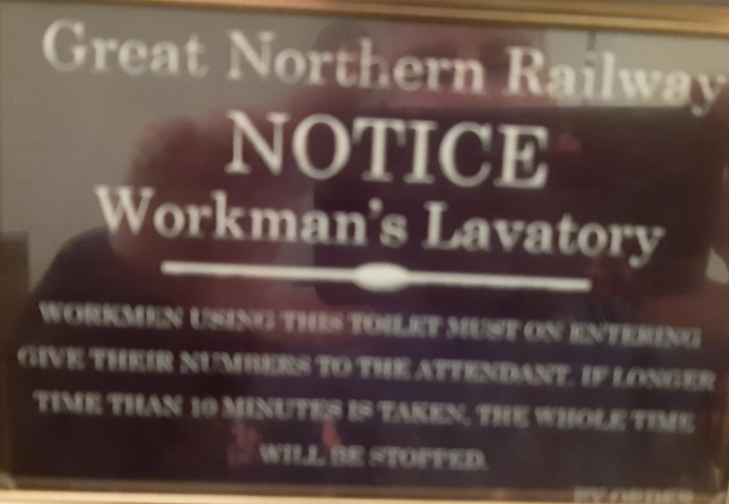 “Those days are on their way back”

Cats seemed to be the theme of the weekend, from seeing them in the Bag of Nails, going in places with cat in the name, Black Cat was another micro, 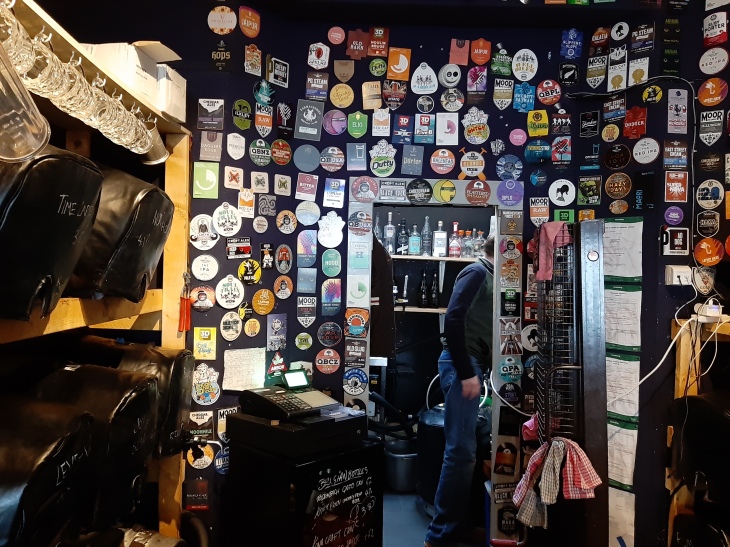 though the perfectionist who was looking after it for the day, was getting stressed out, he’d dropped a card payment device, and was trying to fix it, he settled for two pieces of gaffer tape, but you could see he wasn’t happy about it. Me being me, couldn’t help but pry into his personality, turned out that by trade, he’d been an accomplished, celebrated chef in one of the upmarket restaurants in Stratford upon Avon, before looking at his newborn daughter, and deciding she was far more important, and he needed to change his career, it figured. The final place I went into before the game, was a new place that Spoons had seen in the latest Camra mag for the area, Fork and Ale, is exactly what it says on the tin, a place you’d go to get something decent to eat and drink, I settled for a beer as time was moving on to quickly,

had it not been, I would have chosen something off the menu.

The Football Ground Guide lies, or certain grounds on it, are covered by a Darryl speed contributor, either way, and I went the right way for a change, it definitely took longer than the stated time on the website, and I don’t exactly move at snail’s pace myself. Maybe it was my hatred of bland, American style, soul sapping retail parks that made it feel longer, but within keeping with the long held tradition of us ale trailers missing kickoff, I missed kickoff. 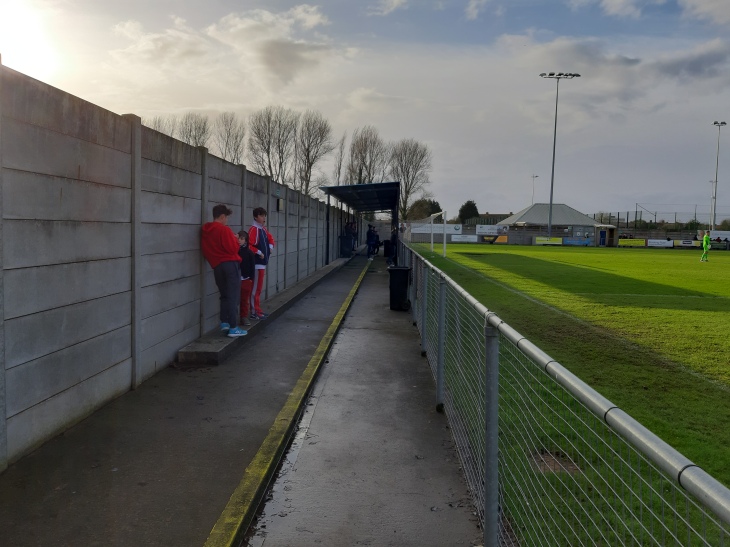 A hotch potch of a ground, it didn’t give me that homely feel about it, didn’t give me that feeling of tradition. Everything felt cobbled together on the cheap, I know there’s less money at most Non-League clubs than you’d find down the back of the sofa, and that there are people who strive tirelessly and thanklessly for no reward to keep clubs running, but couldn’t help thinking that there was more than just finances missing, same as any meat in the steak and kidney pie I bought, I’ve had bigger bits of meat in chip shop gravy than what was in the pie I bought. It was the polar opposite to the pies that they sell in The Diggers, I’d had thicker cups of Bovril. If the pie hadn’t been disappointing enough, the half dozen Walton fans had brought a drum with them, unfortunately, they hadn’t brought someone who could play it properly. Smashing a drum as hard as you can with stick, doesn’t create an atmosphere, it just makes you want to grab the stick and ram it somewhere that would require it to be surgically removed. There wasn’t much between the two teams, it needed something a little bit special, it got it, a great low strike from the clearance from just outside the area, went through the crowd of players that had previously assembled for the preceding corner. The drum went silent for about 30 seconds, I’d hoped it had broken, but to my dismay, it hadn’t. Halftime came and the usual migration that happens at Non-League grounds, happened. Fans move round to be closer to the goal they’re attacking, the 5 Walton fans and their annoying percussionist, had moved, I hadn’t. Second half started, and sooooo did the assault on my ears, I jammed my earphones in, using my overnight rucksack as a cushion, I stretched my legs out on the tin terracing and tried to enjoy the second half. The second half didn’t bring any more goals, but it wasn’t for the lack of commitment from the number 10 of Weston, who ran the show and created numerous chances that should’ve had at least one converted, the best thing that Walton could muster was when, in added time, the keeper joined in to attack a rare corner.

That Football grounds guide website definitely lies though, the walk back into town takes a good 10 minutes longer than stated, I know, I timed it. Not that I can ever see myself going back for another game, the walk itself was as boring as watching a newly painted wall dry, but I was would seriously recommend what I would do, and book a taxi. I hadn’t managed to do all the pubs on my itinerary, so I chose one that was nearest to the train station, 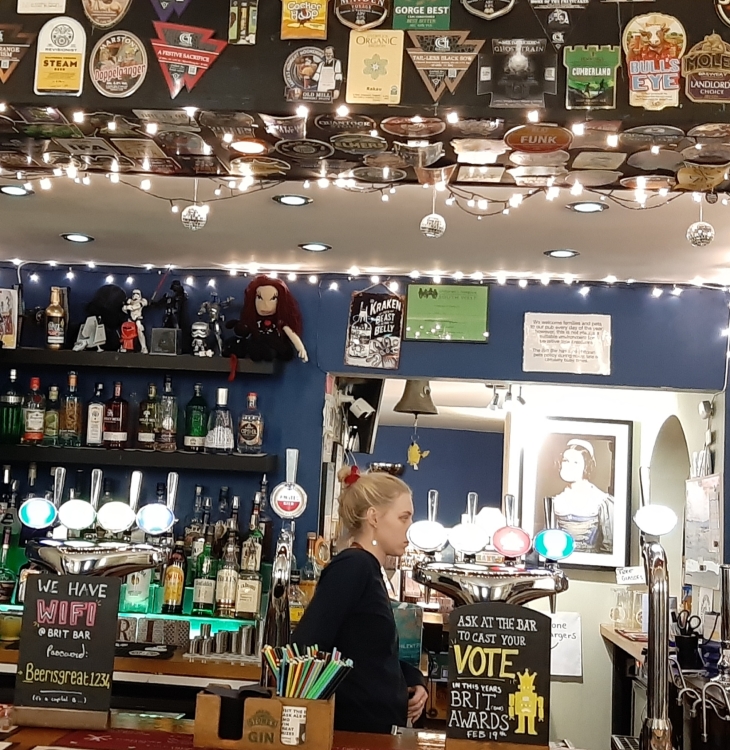 The Brit Bar conjured up an image of a sparkling, slightly sticky carpet wine bar with plenty of Carling, the brigade in attendance, but sporting ‘kiss me quick hats and Hawaiian shirts (well they would be on holiday), I was to be pleasantly surprised, the place belied its name, full to the brim of oddities and character, and I’m not just on about the clientele, a Bohemian vibe if ever there was one. Getting back to the station, I had time for a half, so I put my head round to see what Off The Rails, had to offer, the description on the Whatpub website, mentioned that it had two pulls on, that served locales, disappointingly, neither were being used for anything, never mind anything local. To exasperate things further, the train was delayed, and by the time we’d got to Bristol Parkway, my connection had already vanished up the track towards Brum. In one respect, I was thankful that we were so late, that I didn’t have to wait at the soul destroying non-entity that is Parkway, for too long, before getting the next train back home. Once back in Brum and on the bus, I managed it in the flat before storm Ciara got going properly, blowing me halfway back to the city centre.