I had heard this season was to be the last for Boston at their present ground, and talking to the Dad and lad serial ground hopping team from Lincoln, at Darlington at the start of the season, I made my mind up that I needed to do York Street before I couldn’t do it anymore, oh to be able to commandeer the Tardis, and go back and do all the grounds no longer with us, replaced by a soulless retail park or Stepford Wives style housing estate. Fitting in ground hopping and watching your own side, can be a bit of a logistical nightmare, home games tend to be sacrificed, as the atmosphere is almost morgue like bad in terms of singing, and much as I like the people I sit amongst, they don’t half moan when things aren’t perfect on the pitch, which is pretty much, the majority of the time. When I sat down with the fixture list at the start of the season, I wasn’t expecting the added spice of Garry Monk’s return with Sheffield Wednesday, so it was one to miss. This past week roving reporters have been to the places where there’s been bad flooding, broadcasting as the rain still falls, then, from the comfort of their warm, dry studios, Matt Taylor and on Midlands Today, Shefali Oza, gleefully predict more rain, these two individuals bosses need to swap their roles, the roving reporters getting wet, should be able to do the weather reports that Taylor and Oza have prepared, and those two horrible cretins should be made to go to the flooded places if they love bad weather so much. I would say without coats and umbrellas, but I’m not that nasty a person. If I was, I’d say vest and pants like we were made to at school when we’d forgotten our PE kit. I got the train to Derby, the train manager a familiar face, Alan the Baggies fan who just watches Halesowen now, checking tickets as he walked through the carriages. Changed at Derby for one to Nottingham, and then one for Boston, though the platforms at Nottingham had me scratching my head, some stations have confusing layouts, platform numbers aren’t necessarily in the order that you’re expecting. Touching down in Boston, I got my itinerary out and tried to get my bearings, Lincolnshire is flat, really flat. 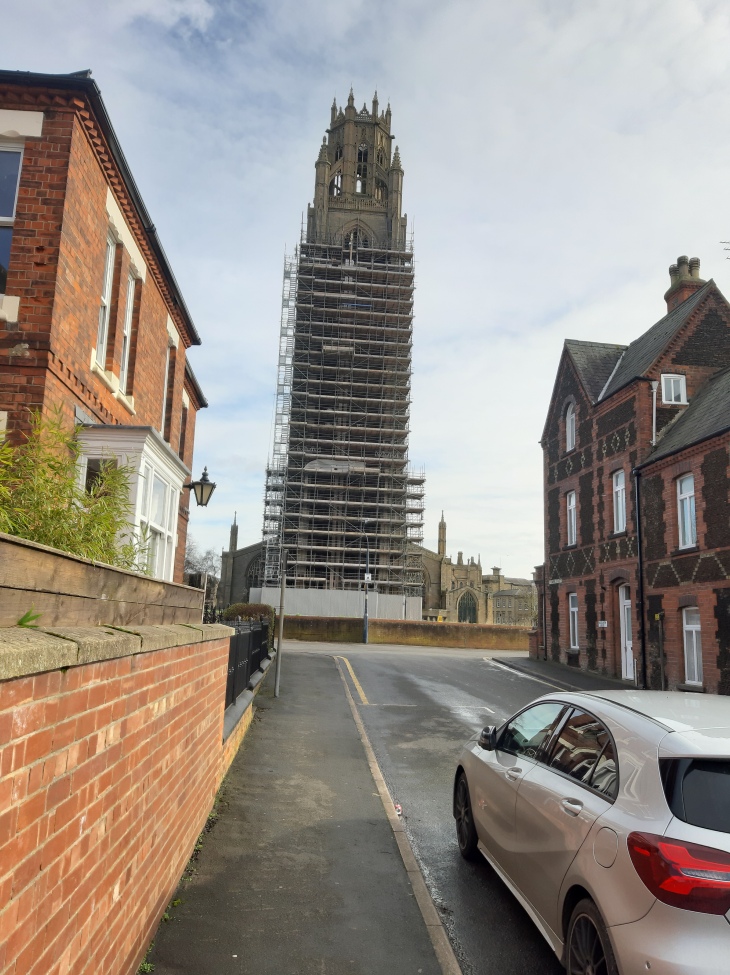 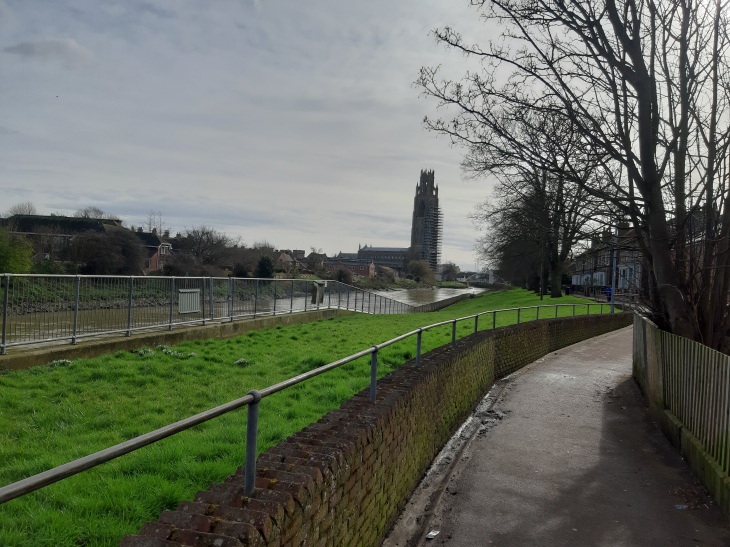 “From the top, you can touch the moon at night”

The first on my itinerary only had one hand pull on, and they were letting it settle, so I moved on to number two, The Moon Under Water, a Wetherspoons, but unfortunately, this one had a Marston’s twist, except for the staple range of ales you find in every Wetherspoons, all the ales were from the Marston’s portfolio, It was a disappointing start, I moved on to The Golden Lion, where I had a well kept pint of Everard’s Tiger, it had been a few years since I’d had a pint of it, it’s still a good pint when kept properly. 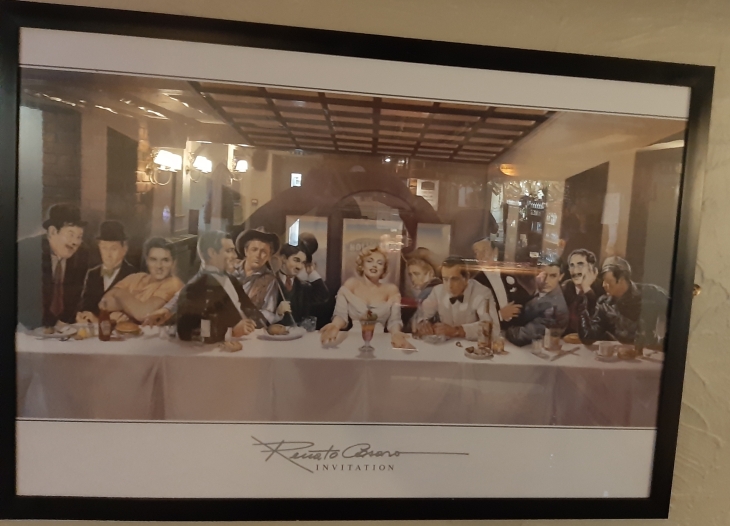 “Now that would’ve been a good last supper”

The people of Boston were coming across as friendly, whether they were born there, or had migrated from Eastern Europe, and I was amazed at how many Eastern Europeans there were, I had known that there had been a huge influx, but I hadn’t realised how huge, I was closer to Warsaw than I was Walsall. I had got The Robin Hood on my itinerary, but it wasn’t open when I got there, and it was well after the advertised opening time, with no sign of life inside, I moved on to the one place on my itinerary that I was looking forward to, The Eagle, 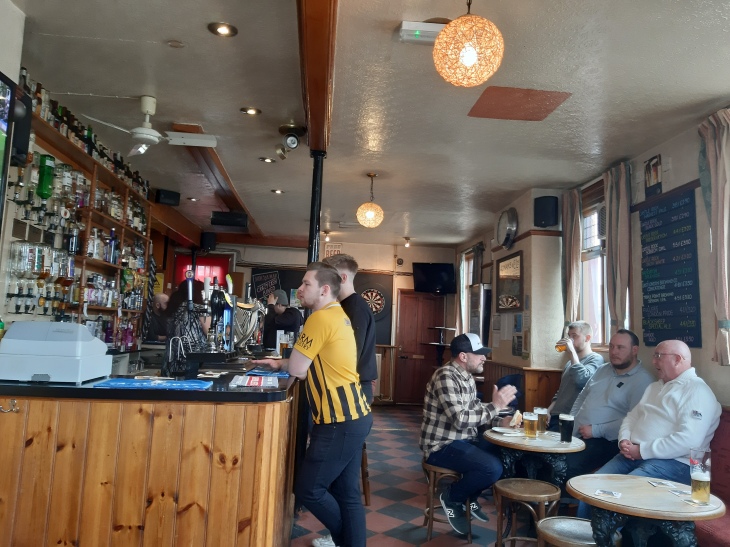 I couldn’t fault the place, I could try, but it would take too long to come up with something, anything, and it wouldn’t be big enough to warrant making an issue of, every single base was covered, including having the football on the TV, Chelsea v Spurs, and by the seem of it, the faceless people at Stockley Park are Spurs fans, as every single person in the pub, with eyes on the game, were baffled as to why, after an obvious sending off had been referred to VAR, it was deemed to be only a booking. I left The Eagle and made for the Coach and Horses, the last place before the game. 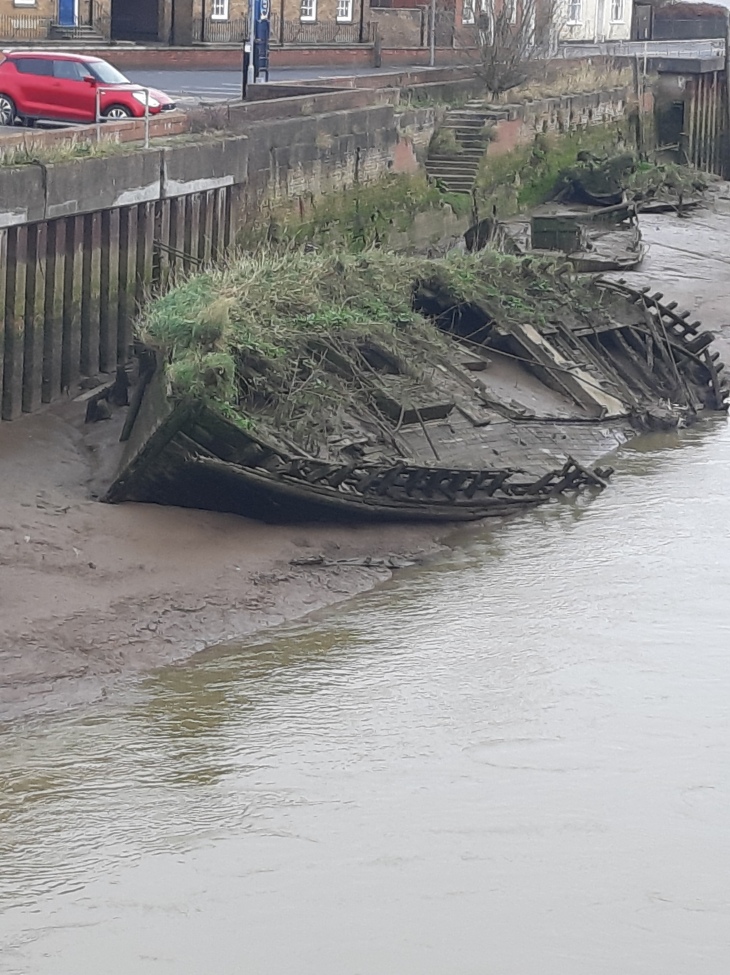 “Don’t think much of the ferry” 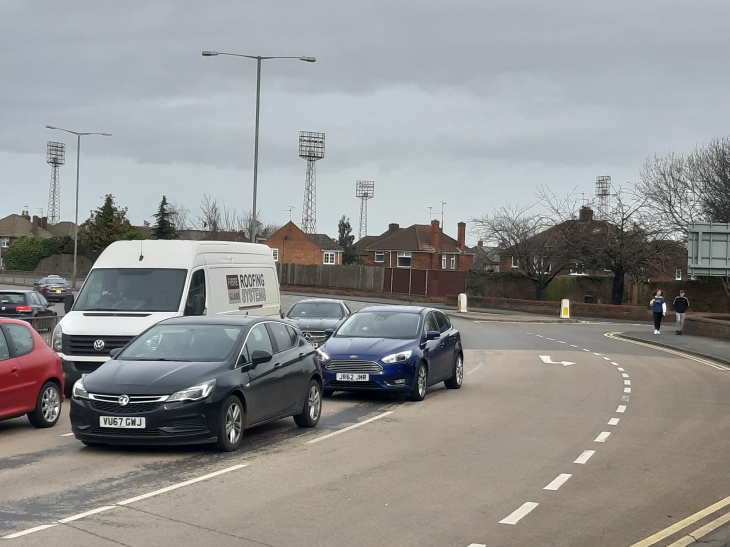 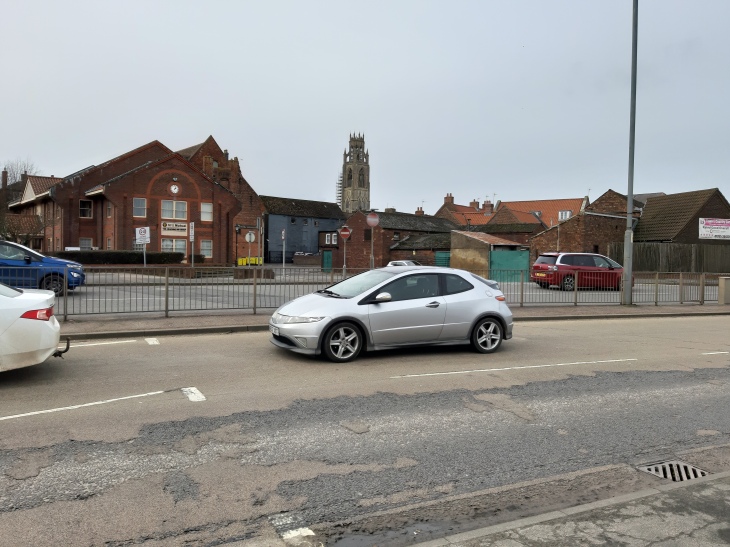 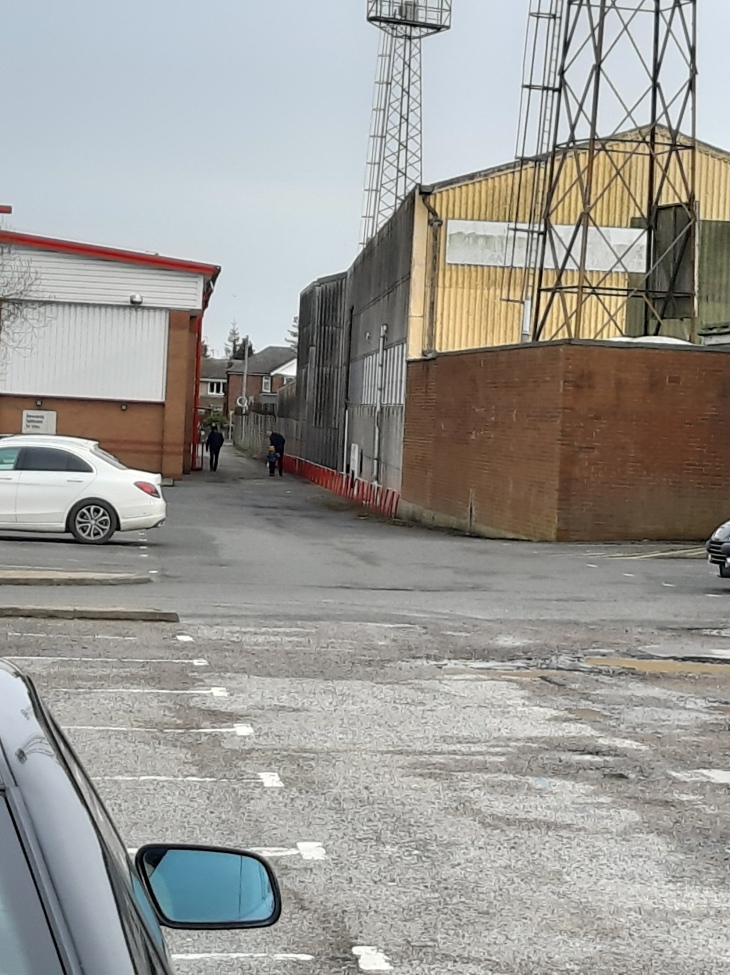 I don’t know what fans are going to do for a pub to drink in, but it won’t be the Coach and Horses, and it won’t be as good. 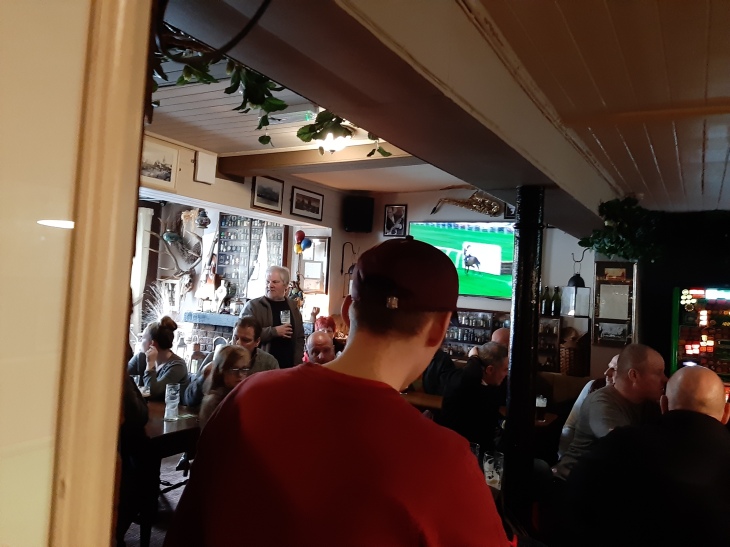 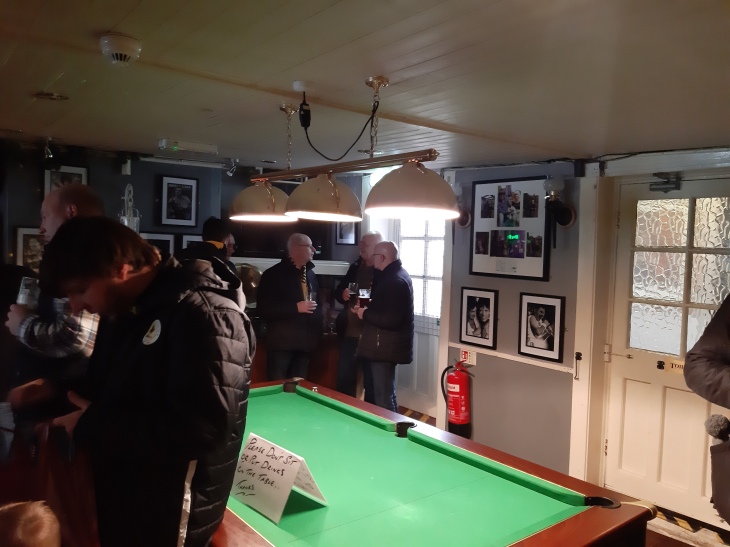 “The Boston fans will miss this place”

An eclectic decor, with a bias for music memorabilia, especially rock.

So Boston United will be moving to a shiny new, all singing and dancing shoebox on the edge of town, this was to be my first and last visit. York Street might be as palatable as an old British Rail cheese sandwich, with its stale corners turning up, in terms of corporate hospitality, but it’s a proper football ground, not a ‘stadium’ made of tin, with torches screwed to the roof. it was with a heavy heart that I took the photos. 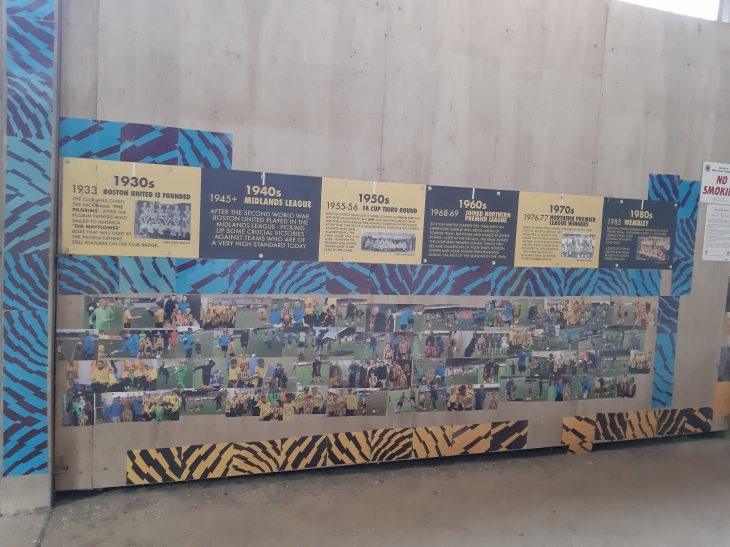 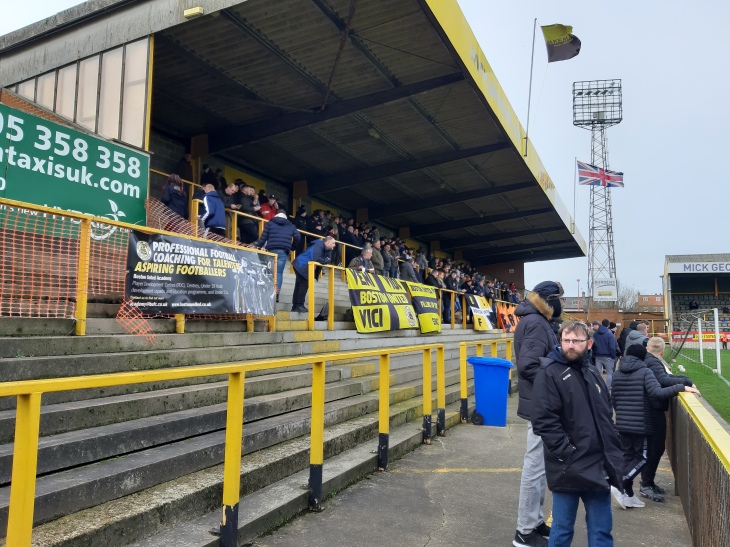 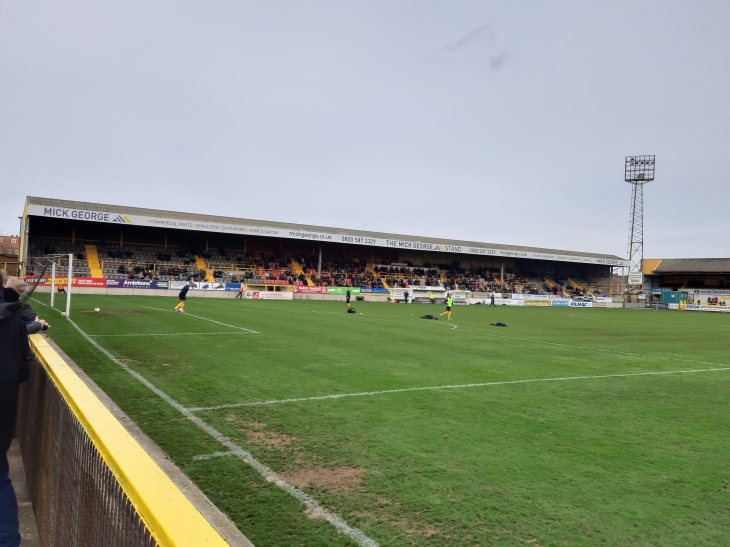 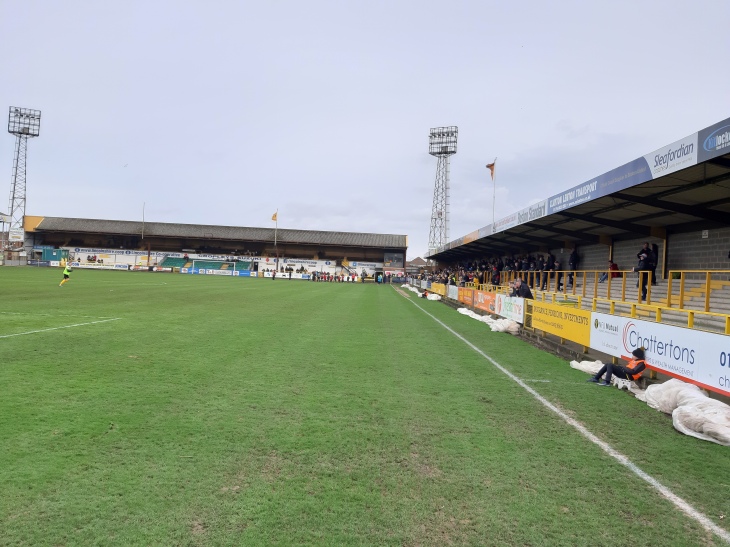 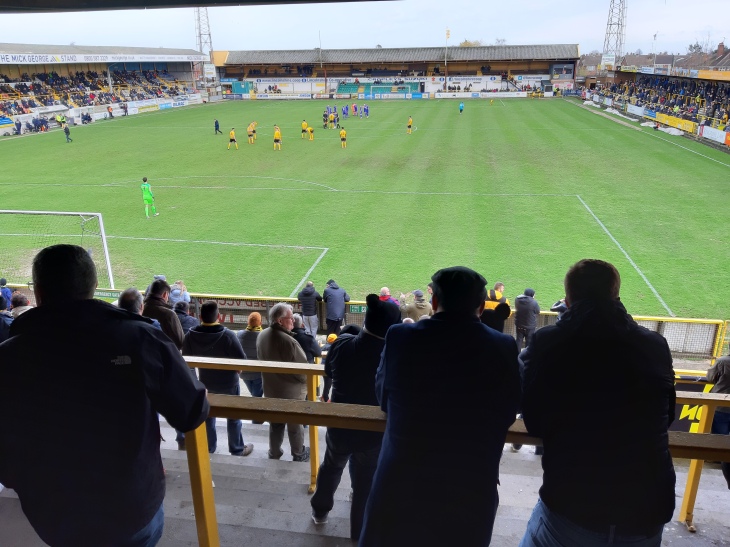 “RIP till those pesky bulldozers do their worst”

I’d actually forgotten The Pilgrims were playing Telford, the place I’d lived for a large chunk of my life, it was only when someone exclaiming ‘same old cheating Telford’ that I remembered, as it was ridiculously early into the game, I can only assume it was premeditated, with a hint of grudge. Although I’ve watched a fair number of games involving Telford, I’m now quite ambivalent about their exploits, I just wanted to watch a good game, something that the wind was having fun with, the ball at times, took on the persona of one of those ‘fly away’ footballs that you can buy in Skegness…..and all other reputable seaside towns. It made for interesting viewing, The away side was finding it beneficial, as Boston struggled to come to terms with it, and good chances were falling for Telford, and they should’ve taken the lead, a brilliant last ditch tackle that kept Boston on parity, went unrecognised by the home support, I could only feel that the apathy that was shown was due to complacency, they were used to good defending. The Pilgrims, keeping the ball low, broke into the box, Telford not being as good at defending as Boston, gave away a penalty, duly dispatched, the home side went 1:0 up. The second half had me consulting the programme for the name of Telfords keeper, something else I’d forgotten, it was Michael Luyambula, on loan from the Blues, last season he was on loan at Hungerford, I watched him play at Hampton and Richmond, I say I watched him play, he had that little to do, he could’ve easily have set up a deckchair, and read a book. Someone had switched the wind down from gale force to normal, whether the bill hadn’t been paid or it had just run out, I don’t know. The on loan keeper had much more to do than he did at Hampton, and at times looked a bit jittery, he’s definitely got the physique of a goalkeeper, and the agility to go with it, but his decision making was a tad suspect, he is of course young, but I’m not sure he’s got what it takes, he is playing at a higher level this season, so is being tested more, time will tell. He was beaten in the second half, but the goal was chalked off for offside, so he was only beaten from the penalty spot, and it wasn’t for lack of effort from the home side, who searched in vain for the second goal, and that all important cushion. Even a sending off for Telford didn’t help, as it was in added time. The 1:0 win took Boston up to 3rd, and took me back into town.

I headed for something on the horizon that looked vaguely familiar, 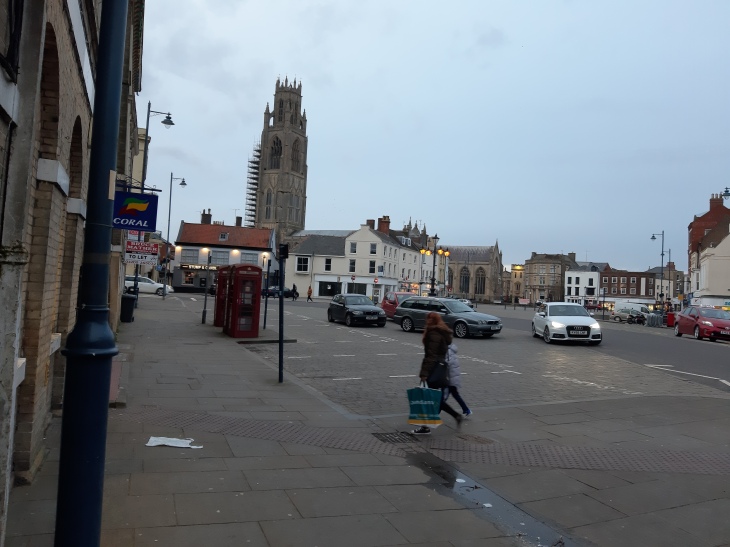 “I made do with this place instead”

St Botolph’s church is nothing if not striking, to say it dominates Boston, is an understatement, as I indulged in a mooch round Boston before heading to The Eagle, the other thing that dominates Boston is its Eastern European community, I’m used to living in an area of Brum where most of the shops are Asian, with a sprinkling of Afro Caribbean, in Boston, the vast majority of the shops off the old main market square, are Eastern European. Only a visit to Boston will give you an appreciation of how many shops, and how big the community is. Post Brexit could be interesting for Boston, they may even have to add the word ‘closed’ to the ‘Welcome to Boston’ signs. Unless there’s a particular place or places I want to visit after a ground hop, I always go back to the best, and The Eagle is the best, if it had a tower to indicate where it was, that tower would dwarf the stump. If it hadn’t have been for having to catch the train back home, I would have stayed the evening in there. Boston to Nottingham, Nottingham to Burton, Burton to Brum, I could understand why I hadn’t done Boston before, I liked Boston though, and will probably make the effort to visit the shoebox for a game, I will, however, lament that it won’t be the beautiful ramshackle ground they have now.