I woke up in a blind panic, it was the 29th of February, traditionally the one day when a woman can propose to a bloke, as I contemplated double locking the front door, diving back under the covers until midnight, a wave of relief washed over me when I remembered, I’ve a face that resembles a bulldog licking a thistle, and have a personality as bland as magnolia paint. I got the bus into town, and then waited under the departure boards at New Street, with them lot playing in the League Cup final, I was expecting to see a few of them with overnight bags, if there were any, they were extremely quiet, I caught the train down to Euston with Ian, Jinksy and Darryl were working, Steve was still in London, and Spoons, JK and Mikey, were travelling down on the Chiltern line. We touched down and caught the tube down to Leicester Square, slightly before The Harp opening up, we went in The Brewmaster and had a quick half. We’d just got our first pints in The Harp, when Spoons, JK and Mikey walked in. I’ve been in the Harp a few times now, especially as it’s my favourite pub in the centre of London, but never knew it’s a former CAMRA pub of the year, might explain why I like it so much. I’d been entrusted with producing an itinerary, so the pressure was on, I was with seasoned ale trailers, in relative terms, they were adults, I was a mere toddler. The first proper one of the itinerary was the Nicholson’s White Swan, typical of their portfolio, it was an ok start, The Lamb and Flag, a short walk away, had impressed me the last time I’d been in there, other than the plastic glasses that is, thankfully, as it was early in the day, it was proper glasses, I don’t know how old the pub is, but it gives you the impression that it’s been a pub for more than just a couple of centuries. If finding the White Swan and Lamb and Flag hadn’t proved difficult, I missed the point of reference I needed to get to the next place, and led the rest wrong, but luckily not too wrong, Ian with his Union given phone, led us to the Craft Beer Co, I had got the Cross Keys pencilled in originally, the Craft Beer Co, was a late replacement due to a recommendation by Steve, and it was was well worth it, the place had the best range we’d seen on the trail, it was back to almost the Harp, but The Lemon Tree instead.

Nobody likes going to Loftus Road, it’s an awful ground to go to as an away fan, not only does it seem like it was put together in haste, as part of a primary school project, using a couple of cornflake boxes, a few plastic drinking straws, a bit of tissue paper, and held together by some string and a couple of sticking plasters, but usually it’s patrolled by the dregs of the Metropolitan Police, and the worst stewards anywhere in football, however, the Police were pretty inconspicuous, and the stewards seemed like they’d all been on courses in considerate crowd control, or maybe they were just ‘on loan’ from Brentford.

There was no Bellingham, he was on the bench, I could only think he was being held back for the cup game versus Leicester, or possibly just fallen foul of Pep’s ‘Bingo’ team selection. The game settled down into the usual Championship fare, nothing special, nothing that would have your mouth dropping open in awe, The Hoops were the first team to strike, or so they thought, their ‘opener’ was ruled out, the ‘real’ opener, came courtesy of Scott Hogan’s 5th goal for Blues, when he raced through, poking the ball past the star jumping keeper, before following it up and making sure, least I think that’s what happened, as you can’t see the goal line without the aid of an elaborately constructed periscope, you can only guess from the joyous reactions from the players and lack of spring loaded flag, that you’ve scored, or conceded, we were 1:0 up, the scoreboard at the other end said so. I try not to be biased, I try to be balanced in my football viewing, something that is much easier when I’m completely neutral, but I like to think I’ve got it about right, I listen to some around me, as I watch the same game, and wonder how many actually enjoy football, it’s a game that lasts an hour and a half, even the greatest exponents of possession football, can’t last that long, you have to realise that the opposition are going to have the ball, they’re going to advance into your half, and maybe even have the temerity to take a shot and score, and on the subject of scoring, the club that you support, won’t score with every attack, the vast majority put themselves through far too much stress for a normal, bread and butter game, anger and anguish in equal measure, heart attacks constantly on the verge. Second half started, and Pedersen made a hash of what should’ve been an easy clearance, the resulting corner led to the equaliser, 4 minutes later, and Pedersen’s lack of positional sense was not only evident, it was exploited by the home side, and the slender lead we had, had been turned into a deficit. I don’t rate Pedersen as a fullback, true, he can tackle and head sufficiently enough, but his decision making is as poor as his positional sense, I’m not going to single him out though, as his fullback partner in crime, Colin, was equally as bad, if not worse. Those two aside, the rest were the usual mediocre, bar Hogan, his equaliser to make it 2:2, thus extending our unbeaten run to around a million, 3 quarters of which are draws, was his 6th in 7 games, he’s only scored 7 in 56 for his parent club, them lot. When they signed him from Brentford, I feared the worst, but like his mate Jota, failed to deliver once they’d moved from Griffin Park. I don’t know why it never happened for him, and I’m happy it hasn’t, but he definitely looks the goalscorer we needed, I don’t know if he’ll end up at ours next season, I’m not expecting him to, he’s exploded into life at ours, so it’s over to our owners, it’ll be down to them.

Even after securing yet another point in our quest to remain unbeaten for the rest of the century, I still hate Loftus Road, and I was glad to get out of it, and resume drinking, catching the tube with Ian, before saying farewell and getting off at Marble Arch. 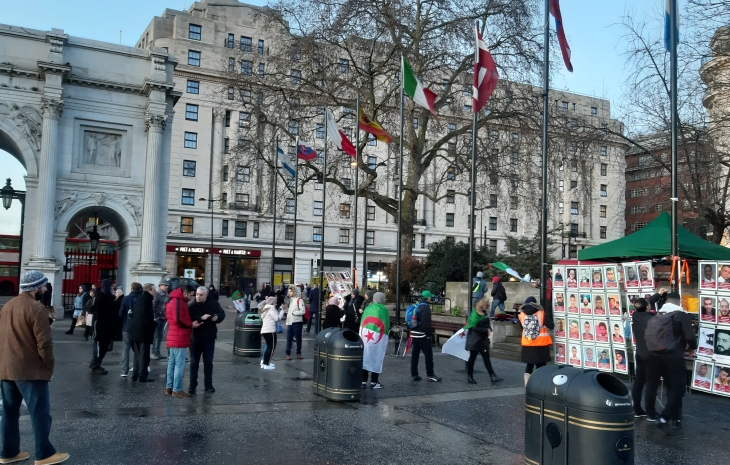 I’m more likely to eat it than visit it, but the organised protest definitely caught the eye, and musically captivated, but for it, I wouldn’t have known about the political internment going on in Turkey, I would’ve stayed a bit longer, and found out a little more, but the beer was calling.

In The Carpenters they had the Watford v Liverpool game on, as always with a game involving Liverpool on the TV, the usual ‘plastics’ had got up early to put their beach towels on deckchairs, doesn’t matter where you go in the country, if Liverpool are on the TV in a pub, the seats and stools nearest the screen, will be inhabited by ‘staunch supporters’, who have never ever been to the city, let alone watched a game in the flesh. The arrogant, smug expressions, vanished when Watford took the lead, they hadn’t reappeared by the time I left the pub for the tube to Marylebone. After beating them in the league the last time we played them, I was expecting a backlash in the cup, and hadn’t had my eyes on the Hearts v Rangers game, it had been posted on the WhatsApp group that Hearts were winning, as I came out of Marylebone station on my way to The Allsopp Arms for one last pint, I checked the score on the BBC website again, it changed to fulltime before my eyes, Hearts had won, there was no hiding my happiness, I was jumping up and down like a loon, shouting ‘yasssss’. In fear of being carted off by the men in the white coats, I calmed down enough to go and get that pint I wanted. The first sight I saw as I entered The Allsopp, was a bloke in a Halesowen shirt, they’d beaten Barnet away in the FA Trophy, I couldn’t help but get talking to him and the two lads with him, it’s not often you see a Halesowen shirt, let alone one in London, let alone someone happy in one. The one lad was a Baggies fan as well as Halesowen, and the other turned out to be a Shrewsbury fan from Market Drayton, with plenty of connections, the conversation was never going to fall quiet, it made for a decent end, to a decent day, before getting the train back to Brum asleep, headphones jammed in.