Me and Chris met up, and got the train to Wolverhampton, where we were joined by Daz and Sid from Willenhall and then Spen and George from Wombourne. We boarded the Manchester train when it arrived, and found Walshy and Pughey on it. It had the feelings of a big day. Getting off in Macclesfield at 10:45, we thought we’d only have a quarter of an hour wait for the pubs to open. Wrong, nothing opened before 12 o’clock, even on a Saturday. As I stated in my post for Torquay, Wetherspoons was still in nappies and hadn’t started it’s plan to conquer the world. (Or at least this country) luckily for us, the weather was being kind and wasn’t raining. The idea of getting in a pub early had gone out of the window. We’d have to do a ‘Martin’, get some cans from an Off licence and find somewhere that the Ol Bill wouldn’t notice us. Finding an Off licence wasn’t too difficult, but not knowing Macclesfield, we didn’t really know where would be best to drink our new purchases. We wandered round for a bit, before spotting a church. The grounds would be perfect, just out of sight, we felt like a bunch of teenagers. Finding a bench round to the side, plonked the booze on it. It overlooked the train station. We watched the next train dock, it had come from the same direction we had. A good couple of hundred ants evacuated the station, more than what you’d expect for a town the size of Macclesfield. We heard the faint sounds of ‘Keep Right On’, there was to be no prizes for guessing who the ants were. The next train from that direction unloaded double the amount of ants as the first one. The strains of our unique and famous terrace anthem filled the air again. We collectively relaxed, we wouldn’t be bothered. There’d be enough for the local constabulary to be concerned with elsewhere. There was to be a continual conveyor belt of Brummie ants arriving while we sporadically watered the flowerbeds with human fertiliser. Here we were in Macclesfield to watch Blues play Chester, yet not one of us eight actually lived in Brum. We’d inadvertently picked a great spot to while away the time before the pubs opened and the weather was being kind to us. Cans more or less drunk, we went in search of a pub. The town had become inundated with Blues fans, we were everywhere, had the run of the place. A group of lads had bought/stole (delete where applicable) one of those ‘fly away’ football’s that you only seem to see at the seaside. They were playing football between the cars in the high street, we fleetingly joined in, the ball bouncing off windscreens sending it in all directions. We left them to it. Gravity took us down the hill, before we veered right. We found a pub easily enough, everything was now open. There were a few Man United fans in there, they were off to catch the train down to London for their game v Nottingham Forest in the League Cup final the following day. They only stayed for a pint before they and their overnight bags went for their train. We wished each other luck. Little were they to know that they’d just entered a twenty year run of success that was to completely commercialize the club. You want to see how Manchester United used to feel like, then go and watch a FC United of Manchester game, doesn’t matter, home or away, but it’s better than getting blinded by billions of tourist camera phone flashes at Old Trafford. I digress, the last of the cans were mixed in with the pints we bought, the empty cans shoved back into the plastic carrier bags and underneath the table out of sight. The pub had a bar billiards table, and we attempted a game, but as none of us had an earthly idea of how to play, we quickly lost interest. I still have no idea of how to play it. We left the pub with enough time to find the ground.

The game wasn’t all ticket, but we’d been given half the ground. Like I’ve already stated, along with Albion and Stoke we we had the biggest fan base of the division. Chester were tenants at Macclesfield, the constant travelling for a home game had taken its toll on their support and it had somewhat dwindled. The away support for Chester’s home games was regularly more than the home support. It had been dwarfed. 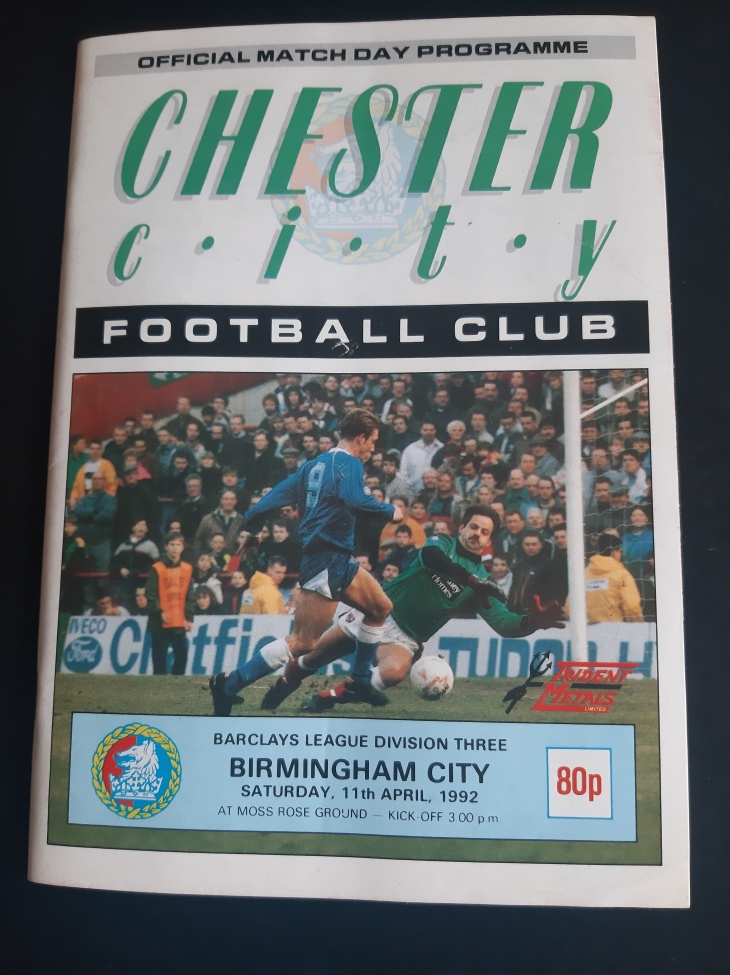 “Still had a programme though”

The riot at the home game versus Stoke had been the catalyst in Blues form. It had turned itself round. We were firmly back in contention for automatic promotion and the games were running out. With Macclesfield not being a million miles from Brum, it was why this game had been so attractive. So much so, that finding somewhere we could see the game was proving difficult. To the right at the bottom of the terracing behind the goal was a 6 foot wall constructed of concrete slats. The type that you see in an office carpark instead of a garden fence. Sid had climbed on top of it to get a better view, Walshy had decided to do the same. It made perfect sense,  I joined them. It was a good job the concrete struts that held it together were reinforced. These days, I’m not even fit enough to even think about attempting to climb it. Blues were gripped with stage fright, passing to someone in the same colour shirt was to prove difficult for them. Chester were at the wrong end of the table and battling for their 3rd Division lives. Fear of failure does strange things to the human mind. It chains up rational thinking, movement becomes stifled, self belief takes an unscheduled holiday. It can take a huge amount of willpower just to stop sheer panic making a right mess of things. Chances were at a premium for both teams. In the second half we had a free kick in an excellent position. Mark Cooper took it. He skied it so badly that an aeroplane and then a satellite had to swerve out of the way as the ball carried on its trajectory towards Mars. There was a collective groan though thankfully not from the fence we were sat on. Time was running out, mercifully, in the very last minute, we got another free kick in virtually the same place. Mark Cooper again took it. If his previous attempt was badly skied, this one was exactly the opposite. He scuffed it, it wasn’t so much a daisy cutter, as a get the spade out and dig a tunnel. Blinking in the sunlight, the ball resurfaced, startling Barry Siddall in the Chester goal so much, that he allowed it to squirm between his legs. Nigel Gleghorn raced in to smash the ball that last inch into the net. The ground erupted, even half of what I thought was all home support behind the opposite goal, went barmy. The referee blew time, we’d won. The pitch was invaded, but this time, it was just in celebration. We jumped down from our perches pitch side. I congratulated our on loan keeper Kevin Dearden. The expression on his face showed that he’d never been part of anything like this. Walshy fist bumped the young keeper, telling him “Nuff respect”. If the fans reaction had surprised him before, Walshy’s action paralysed him. The poor kid had no idea what to do or what to say, he was stumped. Welcome to the Blues Kev. Eventually all the jubilant fans that had enveloped the pitch started to get bored and we started to drift away.

The road that led back down towards the station was chock a bloc with vehicles full of ecstatic Blues fans, one particular result had added to the celebrations, Stoke had only drawn away at Hartlepool, we’d gone joint top. everyone was singing, music was turned up on car stereos, everyone that was walking were doing the famous Nobby Stiles jig. It was an impromptu party. One Blues fan was waving a bottle out of the window of the  car he was in for anyone brave enough to take a sip. I was that emotionally high from the afternoon’s events, that I would’ve drank a whole host of things that in a normal sober state I wouldn’t have been enticed by. Even with the promise of untold riches, I would’ve been vehemently shaking my head, maybe even with the promise of carnal pleasures with a Bunny Girl. Walshy took a sip, almost choked, as did Chris, as did Pughey, as did Daz, as I did too. Sid on the other hand, had two gulps of what on the throat, felt like something you’d dissolve incriminating pieces of evidence in. He looked at us as if it was something he was used to, that it was no worse than vending machine coffee. I’d managed to read the label. It professed to be ‘Overproof’. Over proof what, I’d no idea, but had one of us accidentally spilt some, I’m sure it would’ve melted a crater in the road the size of the average health inspector. We were in no rush as we carried on our merry way down to the station and by the time we did get there, we had just missed a train back south. As we waited on the platform, Sid went to use the toilet, but rather than use the footbridge, he just jumped down and went over the tracks. He’d been spotted. Once he came back out, he was accosted by the police. Walshy went over to try and mediate but wisely used the footbridge.  Somehow, even with Walshy’s inebriated diplomacy, Sid got away with just a reprimand, and sheepishly was able to rejoin us. The train back was an extension of the after match party, and it was a wrench to leave it at Wolverhampton. There, me and Chris parted company with Daz and Sid, before taking the final leg back home to Wellington.

FOOTNOTE:- The attendance of 4,895 for the game was to turn out to be the biggest that was achieved at Macclesfield for a Chester game. It also included the biggest away following. It’s probably fair to say that there had been just over 4,000 Blues fans there.